A grim set of numbers

You have to wonder whether the Reserve Bank has grievously overdone it with its interest rate rises this year.

A grim set of numbers. You have to wonder whether the Reserve Bank has grievously overdone it with its interest rate rises this year. Yesterday we had the news of a declining growth figure for the country as a whole and today the Australian Bureau of Statistics gives us the gloomy news that retail sales in October actually fell from the level in September.

There are certainly no signs yet that consumers are going to take up the slack as the various federal government stimulus programs come to an end. 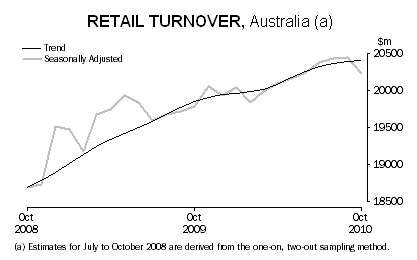 Retailers will be at panic stations as they prepared for what they hoped would be a pre-Christmas surge and my friends the business economists must surely miss out on an annual bonus this year. Having overestimated the growth in GDP this morning they suffer the indignity of getting their predictions of retail sales spectacularly wrong. While retail sales fell 1.1% in October from the previous month, Bloomberg reports that the median forecast of 23 economists surveyed by Bloomberg News was for an increase of 0.4%!

That 1.1% decline means that for the 12 months ended October, total retail sales were only 3% higher than for the previous year. With inflation in the year to September as measured by the CPI rising by 2.8% that means there was barely any real growth for retailers at all.

The hesitancy of consumers to spend showed up as well in another set of figures released by the ABS this morning. While economists might consider an increased surplus on the balance of trade to be a good thing, the reason it occurred was because of a decline in imports rather than an increase in exports.

It is yet another sign that Australians are keeping their money in their pockets rather than spending it.

Coalition agreement broken. Now this is the kind of revolt by a coalition partner that I like to see. The price of beer will not be going up in Slovakia. Four members from Slovakia’s centre-right government this week stopped beer excise being increased as part of budget balancing measures.