Further evidence today that the Australian economy is not exactly booming.

More of the same actually. No need to change what I wrote yesterday really: Further evidence today that the Australian economy is not exactly booming. The message from the trade, inventory and business profit figures that GDP growth would be less than “most economists have been predicting” came to pass.

The national accounts figures from the Australian Bureau of Statistics show, as Bloomberg puts it, “Australia’s economy expanded at half the pace economists forecast.” 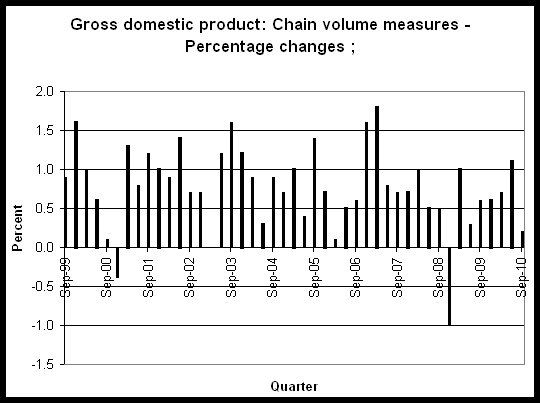 The good news is that there are no signs yet of any abnormal rise in inflation. The statistician said the chain price index for household final consumption expenditure (HFCE) was 0.5%, compared to an increase of 0.7% in the consumer price index (CPI) over the same period. The HFCE chain price index is the national accounts measure most directly comparable to the CPI.

Those European woes. Rising interest rates are not the only figures illustrating that Europe’s economic problems are a long distance from going away. Eurostat, the European Union’s statistical agency, reported overnight that 23.151 million men and women in the EU27 (9.6%), of whom 15.947 million (a rate of 10.1%) were in the euro currency area, were unemployed in October 2010. Compared with September, the number of persons unemployed increased by 84 000 in the EU27 and by 80 000 in the euro area. 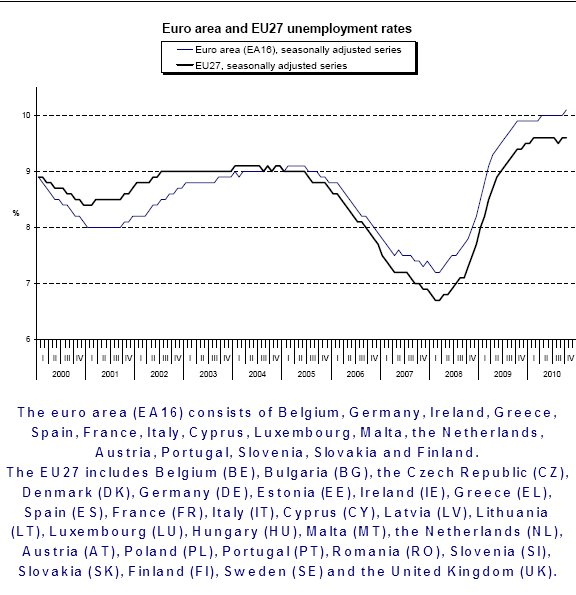 Details of unemployment by individual European country are on Crikey‘s The Stump blog.

Putting bankers in the slammer. The world might still be reeling from the after shocks of the world financial crisis but it is interesting that nowhere do the key participants in the creation of the economic chaos seem to be getting punished. The international bankers just seem to have moved right along to negotiating the size of their next annual bonus while in Europe and the United States the casualties face cuts to their unemployment benefits.

The Nobel Prize-winning economist Joseph Stiglitz drew attention to this seeming anomaly in a recent interview with AOL’s Daily Finance website in which he called for the jailing of many of the bankers who rorted the system. 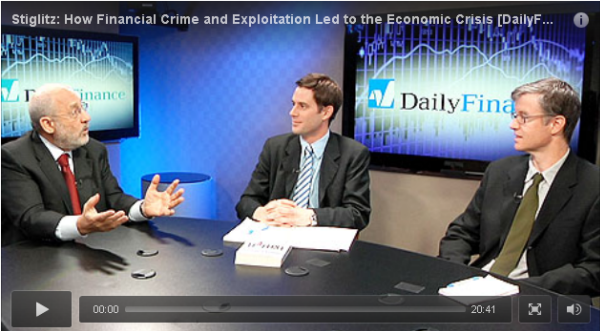 The former chief economist of the World Bank from 1997-2000 and current Professor at Columbia University, explained how the availability of cheap money (thanks in large measure to former Fed chairman Alan Greenspan), combined with outright mortgage fraud and deceptive and predatory lending practices put millions of people into homes they couldn’t afford and caused real estate prices to skyrocket. That created a bubble that would inevitably pop. It’s well worth a listen or you can read the transcript here. This extract will give you the flavour:

Explain how those incentives around compensation were motivating executives to act in a way that was contrary to their shareholders’ interests.

Let me give you two examples. They got more pay when they got stock options. When the value of the stock goes up, they get the upside. But when it goes down, they don’t have to share the losses. When you have a system like, you have an incentive to gamble because you get the upside, but somebody else bears the losses. So that’s an example of incomplete sharing inducing excessive [risk-taking].

But it’s even worse than that, because if your pay is related to the stock market performance, then you have an incentive to try to deceive the stock market. In the long run, information may get out, but you have a short term, and so if you can deceive them for a few years, get your stock options, sell out before the news strikes, then you walk off with a lot of money. And that’s what they’ve done.

So you ask the question, why did they move so much of the risky activity off balance sheet? Now, partly it was to deceive the regulators, let’s be fair. Partly some of this was to deceive the tax collector. But a major part was to deceive the shareholders, so it looked like they were doing much better than they were. Share prices go up, their bonuses go up. Some time down the line, the truth will come out. But by then, they’ve cashed in.

A good example of that might be [former Countrywide CEO] Angelo Mozillo, who recently paid tens of millions of dollars in fines, a small fraction of what he actually earned, because he earned hundreds of millions.

The system is designed to actually encourage that kind of thing, even with the fines.

During the S&L crisis, people actually went to jail. Do you think there’s any chance that’s going to happen with the mortgage crisis.

I know so many people who say it’s an outrage that we had more accountability in the ’80’s with the S&L crisis than we are having today. Yeah, we fine them, and what is the big lesson? Behave badly, and the government might take 5% or 10% of what you got in your ill-gotten gains, but you’re still sitting home pretty with your several hundred million dollars that you have left over after paying fines that look very large by ordinary standards but look small compared to the amount that you’ve been able to cash in.

So the system is set so that even if you’re caught, the penalty is just a small number relative to what you walk home with.

The fine is just a cost of doing business. It’s like a parking fine. Sometimes you make a decision to park knowing that you might get a fine because going around the corner to the parking lot takes you too much time.

Are there any steps regulators can now take to make the penalties more painful?

I think we ought to go do what we did in the S&L [crisis] and actually put many of these guys in prison. Absolutely. These are not just white-collar crimes or little accidents. There were victims. That’s the point. There were victims all over the world. What worries me is that the Dodd-Frank bill, the regulatory bill that we passed a few months ago, gives responsibility to a set of regulatory bodies — the bill itself has all kinds of holes and exceptions — but the regulatory agencies, in many cases, are the same people that were in charge as we pushed to the brink.

So do we have any confidence that these guys who got us into the mess have really changed their minds? Actually we have pretty [good] confidence that they have not. I’ve seen some speeches where they said, “Nothing was really wrong. We didn’t get things quite right. But our understanding of the issues is pretty sound.” If they think that, then we really are in a sorry mess.

Bankers are a law unto themselves, knowing well Governments are powerless to do anything to them, with them or end their profiteering games. The article says it all, how many around the so called first and second world countries have been brought to account for their parts in the international financial mess. [“The international bankers just seem to have moved right along to negotiating the size of their next annual bonus while in Europe and the United States the casualties face cuts to their unemployment benefits.”]

So true, so bloody true.

There are only two choices:

1. Smash a few banks and bankers, including making sure that shareholders in failing banks are wiped out. A few in Ireland come to mind.

2. Contine to play the banks’ game by the bankers’ rules, ie no rules at all.

“… the availability of cheap money…, combined with outright mortgage fraud and deceptive and predatory lending practices put millions of people into homes they couldn’t afford and caused real estate prices to skyrocket.”

Exactly the point I was making last week about the banks here. No real risk, all upside for the CEO’s and the lucky few who can afford to buy shares.

The bankers/CEOs/executives know exactly what it feels like to be a cat with nine lives – they can behave recklessly and live to see another day. These immoral criminals have been given no incentive to change their corrupt behaviour.

Acquiring wealth by rorting the financial system but paying no personal or professional penalties, it’s a fraudster’s dream come true – why would they change anything?