Benjamin Law: I’m not even sure I really like rainbows

As counter-intuitive as it sounds, straight people get the raw end of homophobia too. For LGBT people, one of the hardest things is to make straight people care, but it’s the only thing that will effect proper change, writes author and freelance writer Benjamin Law. 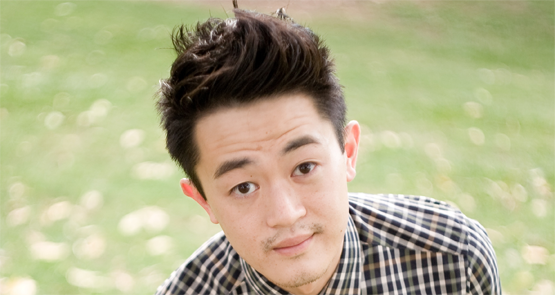 *This article was originally published on December 1, 2010.

Like typical guys, my boyfriend and I put off living together for as long as humanly possible. We both valued our private space, liked our time apart and enjoyed our respective sharehouses. But after experiencing some low points in sharehouse living — think fleas in the carpet and mushrooms growing out of the shower (my place); Canadian flatmates who didn’t use toilet paper (his place) — we decided to make a joint emergency exit. In the end, moving in together was as much about survival as anything else.

We ended up scoring an affordable, old apartment in Brisbane’s most gay-friendly suburb. It overlooked the river, and nearby, there was a floating walkway made up of a series of connecting pontoons. After dinner, we’d go for walks, recapping the day, talking inane sh-t, doing horrible impersonations of people we knew and cracking hideous jokes. The walks were intimate, but hand-holding was a rarity. My boyfriend always maintained he wasn’t the hand-holding type, and I maintained I didn’t really care. But looking back, our concerns probably lay elsewhere — like, say, trying to avoid getting the living shit bashed out of us.

Perhaps that’s melodramatic, though. After Sydney and Melbourne, Brisbane is Australia’s most tolerant capital city when it comes to gays and lesbians. At the same time, it’s the capital of Queensland, a state recently confirmed as being the nation’s most homophobic. A third of all Queenslanders consider homosexuality “immoral”. Bob Katter lives relatively close by. It doesn’t really matter where you live, though. When it comes to something as simple as hand-holding, most same-s-x couples know what I’m talking about. The American writer and broadcaster Dan Savage wrote about the same conundrum in his memoir, The Kid:

“For same-sex couples, taking a lover’s hand is almost never an unselfconscious choice. You have to think about where you are, whether you’re safe, and you have to look. By the time you determine you’re safe, you’re not even sure you want to hold hands anymore. The genuine moment has passed, but you’ve invested so much energy and angst that now you can’t not take your lover’s hand. You wind up holding and the only reason you take your lover’s hand is to prove that you can.”

On the rare occasions my boyfriend and I did hold hands, we’d break off as soon as we saw people approach us. Most of the time, it was just easier to let go.

Some gay and lesbian couples are more gung-ho about this stuff. You’ll see them at kiss-ins and parades, pride marches and floats. A lot of these couples would have attended the recent Equal Love rallies around the country, and I wish I could have been there with them. Instead, I was scheduled to talk at TEDx, a public lecture series that was being held at the State Library of Queensland. TEDx is its independent offshoot of TED: a live, streaming, global, educational love-in, the kind of event that discusses non-profit ventures, sustainability, digital innovation and online connectivity. Think intellectual evangelism for the non-religious.

Because I knew the Equal Love rallies were taking place that day, I decided to do my part and use the opportunity to talk about LGBT rights. Knowing the audience would be predominantly straight, I realised my talk would be similar to accosting people off the street and telling them about your passion for the whales or the plight of the Falun Gong. It was going to be a hard sell. Before I started, I tried to reassure everyone of a few things:

To prevent any potential hostilities, I wanted to reassure everyone that I liked straight people and supported straight rights. In fact, I even dedicated my entire talk to straight people. But because heterosexuals are such a diverse and varied people, I narrowed down my discussions to straight guys.

Straight guys, it turns out, are interesting. One study from the 1980s examined the behaviour of hundreds of primary school boys, and how homophobic language affected their interactions. When they started school, young boys were observed holding hands on their way to class, or hugging each other at recess. By the age of 10 — when epithets such as queer and faggot were starting to creep in — they were mock-punching each other and high-fiving instead. By the time they were teenagers, the amount of anti-gay slurs had reached a peak. Boys would go to cinemas together but sit separately, in case they were seen as gay.

Even now, in Brisbane, it’s common for me to get on a bus and see boys sitting with the entire aisle between them, in case people get the wrong idea. Homophobia, as I told the crowd, doesn’t just affect gay people. If “gay” is still one of the worst things you can be in the schoolyard, that inevitably affects the way we behave and interact. We stop listening to certain music, in case it’s gay. We stop playing certain sports, in case it’s gay. We stop talking to each other in certain ways — and avoid making friends with certain people — in case it’s gay.

As counter-intuitive as it sounds, straight people get the raw end of homophobia too.

For LGBT people, one of the hardest things is to make straight people care, but it’s the only thing that will effect proper change. Gay people might be everywhere, but there’s still a reason why we’re called a “minority”. There are few of us compared to them, and that’s evident every time I tune into ABC’s Insiders and see gay marriage discussed by a panel of exclusively white, heterosexual middle-aged men. It’s disheartening, but weirdly reflective of the political process too. There are so few openly gay politicians on a state and federal level. And from experience, we already know that having openly gay MPs doesn’t necessarily mean they’ll feel comfortable championing the cause.Queer folks can only do so much. And beyond that, some of us are incredibly lazy. I know I am. I don’t want to the one constantly writing whingeing op-eds draped in a rainbow flag, mainly because I’m not even sure I really like rainbows. We need straight people behind us signing petitions and writing letters. Brad and Angelina, for instance, have decided to hold off their own wedding until there are equal rights for all. However, some of you come from immigrant families or have impatient parents, and I don’t think you should boycott marriage altogether. (For the record, I want to come to your wedding and drink your alcohol.)

Perhaps you could show your support in other ways, such as ensuring all the services you use for your wedding — from florists to dressmakers, wedding planners to photographers — are gay or gay-owned. (Think about it. It really wouldn’t be hard.) Straight teachers: it’s up to you to speak out against anti-gay bullying in the schoolyard and staff room. Straight parents: explain to your kids what “gay” actually means, before they kids inevitably hear that it means “lame” or “stupid” or “crap”.

For our part, my boyfriend and I are getting better at holding hands. On one hand, I think it sends straight people a good message: we’re not that threatening. On the other hand, I think we’re also getting to a nice stage in our relationship where we’re beyond giving a sh-t what people think. It’s important to me to try to keep holding on, even if the people approaching us are wearing wife-beater singlets and driving a ute. But if I do let go, maybe I’ll try to wave.

This essay is part of Crikey’s Big Ideas series. We’ve had enough of sound bites set on repeat, glib slogans and half-baked committees – we’re looking for the vision thing. One Crikey subscriber will also get the chance to share their Big Idea with our readers: send us a three-line pitch, on an issue of national importance that gets you fired up, to [email protected] with “Big Ideas” in the subject line.

Eva Cox: put the big society (back) on the agenda

Thank you for writing this beautiful article.

My husband and I were in Buenos Aires about two weeks after gay marriage was legalised in Argentina and while we were in the city the first wedding ceromony was performed. There was national TV coverage, and the mood seemed to be one of dignified rejoicing. We did not see any negative protests or outbursts at all. If there was a homophobic reaction, the TV networks did not seem to feel the need to cover it for the sake of “balance”.

What struck us most was that gay couples did freely hold hands and make out along the riverside, just like any other straight canoodlers, and it made us straight folk feel safer and damned happy to be there. There didn’t seem to be the need to have designated “gay makeout spots” or “Straight makeout spots” in the way that we have “safe zones” for gay people here. Kissing by the river is just what people do.

I suppose it helps that Argentinians are generally more demonstrative in their affections, gay or straight. It was quite common (and lovely) to see police officers – straight, burly and armed to the hilt – greet each other with warm smiles and kisses to both cheeks. In short, we were fascinated at how easily a somewhat conservative Catholic country adjusted to the legalisation of gay marriage and I am staggered that this country can’t seem to cope with the idea without getting the vapours.

Well said Ben. I have always had gay male friends, at least since I was about 15 when my best friend at school came out to me. He was worried I would blank him, but instead I was flattered that he chose me to confide in. In a way I had to come out too, as a straight guy who has a gay friend, and I copped a bit for it too. Even now, when we all should be grown up about it, and in the supposedly gay-friendly Sydney, I get agro from homophobes who just cannot comprehend that someone could associate with gays and not be one themselves.

Oh well, I know who has the richer life 😉

And this is the part where I wipe the tears from my eyes again (only just got over the Pixar video). Awesome post. ‘Nuff said.

Good article and an interesting angle to focus on the impact of homophobia on straight people.

I hope the TEDx audience weren’t as unsympathetic as you feared they might be. I would thought the audience at those events are far more likely to be open minded.