Not exactly a galloping economy

Further evidence today that the Australian economy is not exactly booming.

Not exactly a galloping economy. Further evidence today that the Australian economy is not exactly booming. Australian Bureau of Statistics balance of payments figures for the September quarter suggest a deficit of $68 million in the balance on goods and services, a turnaround of $1457 million on the June quarter 2010 surplus, in seasonally adjusted chain volume terms, will detract 0.4 percentage points from GDP growth in the September quarter. 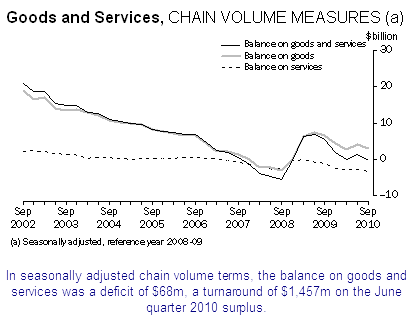 A Green who has learned nothing. It is a difficult thing when you are running for political office to contain your enthusiasm. Optimism is a necessary ingredient to get most people through the months of doorknocking and other campaign drudgery. But hiding that optimism is almost always a necessary part of maximising your vote.

If members of any political party should understand that principle it is the Greens with the regular experience in so many elections of seeing their vote at the ballot box being less than predicted by the pollsters. Victoria last weekend was but the latest example of the phenomenon of how talking up the prospect of victory reduces the prospect of it happening.

NSW Greens MP David Shoebridge, however, has not yet got the message. He was out and about yesterday talking up his party’s prospects at next year’s NSW election. “While it will be tough to win a lower house seat in NSW, if the swings seen in the (state) seat of Melbourne are replicated in Balmain and Marrickville, this will put the Greens ahead in both electorates,” Shoebridge said in a statement. “If replicated in comparable Sydney seats, (it) bodes well for the Greens winning lower house seats in the NSW Legislative Assembly.”

Maybe it does, David, but it is much more likely to be so if you stop saying it.

Advertiser journalist watch. Now that early-morning drinking is deemed newsworthy, I am looking to South Australian politicians to send me regular updates on the social behaviour of Adelaide Advertiser journalists. Not that I can guarantee coverage approaching the over-the-top nature of this morning’s stories about state treasurer Kevin Foley, which dominated pages one, five and six.

Details will be gratefully received care of [email protected]

The European financial uncertainties continue. Bloomberg summarised it this way: Paul Krugman on his blog puts it slightly more colourfully. He reckons it’s like watching a car wreck.

The markets are evidently not reassured. But why should they be?

It’s hard to escape the sense that European policy makers are just completely out of their depth. They know how to deal with liquidity problems, but they cannot come to grips with the reality that this requires more than buying a bit more time. It’s as if we’re having the following dialogue:

The Royal Australian College of General Practitioners has distanced itself from the government's My Health Record roll-out, as the agency responsible for the scheme deals with accusations of defamation.

Coverage of Craig McLachlan's sexual misconduct allegations (or lack thereof) is highlighting the limits of rigour in Adelaide arts journalism.

The Advertiser was printed in Melbourne and driven overnight to South Australia.

Thanks for the graphs. I think I speak for many Crikey readers in saying that good data in a good graph is worth a thousand words. As long as the Y-axis shows full length down to zero, we can compare the heights of the graph here-and-there to draw implications from the facts. We want to read the picture.

Unfortunately, graphic artists seem to assume that most readers are too stupid to study graphs and would prefer a pretty scribble that fills the box available. Journalists, please, check that the Y axis goes way down to zero.

It’s inexplicable why the editor of The Advertiser would devote so much page space to Kevin Foley’s bit of early morning biffo and says much about the egregious standard of the newspaper.