In today's Media Briefs, Julie Posetti is standing by her tweets, NT gives on lucky ready the chance to be editor for the day (must love crocs), The Wall Street Journal refuses to publish WikiLeaks documents, and more....

The tape of the Tweets: Posetti defiant. Julie Posetti is standing by her Twitter coverage of a speech from ex-Australian journo Asa Wahlquist in the face of legal threats from the paper. The journalism academic tells Crikey she has reviewed the tape and, “while I cannot comment on the truth or otherwise of what she said, I stand by the accuracy of the quote I attributed to Asa Wahlquist”.

ABC Online yesterday published a tape of Wahlquist’s comments to a journalism educators’ forum in Sydney last week, which backed Posetti’s recording of events. Crikey has the full recording which can be downloaded here and here (MP3 — approx. 2mb). Watching the panel session on environmental journalism, Posetti tweeted on Thursday:

‘It was absolutely excruciating. It was torture’: Asa Wahlquist on fleeing The Australian after being stymied in covering #climate”

Wahlquist:’Chris Mitchell (Oz Ed) goes down the Eco-Fascist line’ on #climatechange.’ I left because I just couldn’t do it anymore’

Wahlquist: ‘In the lead up to the election the Ed in Chief was increasingly telling me what to write.’ It was prescriptive.

The tape records Wahlquist making each of the statements about the paper and editor-in-chief Chris Mitchell. What’s more, says Posetti: “I consider the quote to have been in relation to a matter of significant public interest concerning journalism and politics and was appropriately the subject of discussion in my tweet.” Mitchell told Crikey last week the claims were “lies” and he had engaged lawyers to sue Posetti for defamation. — Jason Whittaker

Delay in Artz leak case. A video-link snafu has again delayed the committal hearing of Victoria Police officer Simon Artz, accused of leaking information to The Australian‘s Cameron Stewart that allegedly anchored his Walkley-nominated Operation Neath scoop of August last year. The matter was originally listed for the Melbourne Magistrates’ Court on October 19, but postponed until today.

Crikey attended the 10am session before Magistrate Sarah Dawes, however Dawes seemed bemused that the Artz case was appearing before her. Despite the attendance of Artz and his barrister, apparently someone had failed to book a video link to Magistrate Jack Vandersteen, who was 200km away at Sale Magistrates’ Court. The case features 34 witnesses — 12 of which the prosecution wants to deny Artz’s team the ability to cross examine at the committal hearing.

The matter will now (hopefully) resume at 9.15am on December 14. Stewart was present at Ted Baillieu’s inaugural press conference as Victorian Premier-Elect this morning and had to hang up when Crikey called. — Andrew Crook

Editor for the day (must love crocs). “Do you think you can do a better job than the editor?” Crikey‘s favourite newspaper the NT News asks today. Hardly. But damn it, we’d love to give it a shot. And now we can — News Limited’s racy northern beachhead is giving one reader the chance to “experience the ultimate news experience”:

“We’re sacking the Editor for a day and one reader will walk in his shoes, seeing the paper through from morning news to evening press run. You will decide which stories will lead our pages and those that don’t make the grade, and what will go on the front page!

“During the day you will follow a journalist and photographer to see the stories taking shape, get a guided tour of the NT News office, take part in a photo shoot, watch as your paper runs off the press and also take part in a live blog sharing your experience with all the readers.”

Read all about it: a bad Hun typo. That’s Jacinta Allan eyeing the Labor leadership in Victoria, not whoever the “Allen” yesterday’s Herald Sun banner refers to is. 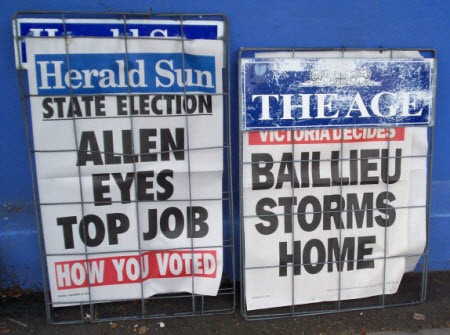 It would have helped a bit if Allan was actually in the race for the plum opposition post, however as Crikey revealed yesterday, her Socialist Left faction is currently pouring most of its resources into its preferred candidate Daniel Andrews. — Andrew Crook

Lance may be on something — but come see him in action. More synchronised ad placement on The Age website… 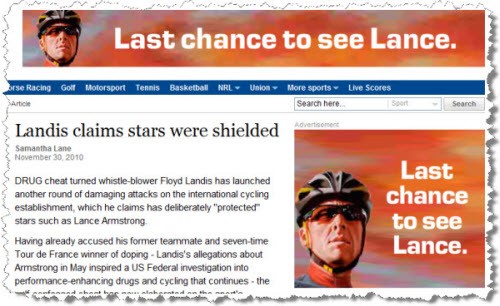 Does the ABC care about ratings or not?

“Yesterday the ABC got into the Ratings Press Release game, with just as much spin as their commercial counterparts. This is disappointing.” — TV Tonight

To publish or not to publish: the WSJ didn’t, and explains why

“An organization has obtained secret documents. They are newsworthy, but they could be damaging as well, to national interests and individuals. Do you publish?” — The Wall Street Journal

Will Murdoch put his politics on the iPad?

“In chasing the iPad audience, Murdoch is making the calculation that there’s space for a product that doesn’t take a side in the predictable left-right cage match. These readers, in this thinking, demand a new brand of journalism, and Murdoch wants to be the guy who supplies it.” — New York Magazine

Brazilians turn to Twitter for news on Rio riots

“A remarkable, improvised real-time news service was being beamed out of the favela, and gathered followers exponentially in a classic ‘viral’ explosion of interest.” — BBC News

P-rn in 3D in your lounge room — enough said

“While a limited amount of 3D p-rnography that can be viewed through red and blue lensed glasses has been available online for a few years, this will be the first time adult movies can be watched in 3D on TV.” — Metro