FOI lifts veil on our ignorance of international pollution action

A lead veil is shielding commentators from the extent of international action on pollution and climate change, writes John Connor, CEO The Climate Institute.

Earlier this year, in the gloomy aftermath of the Copenhagen Climate Summit, then climate change minister Penny Wong signed off on internal government analysis of China’s Copenhagen commitments to significantly improve the carbon pollution intensity of its economy.

The analysis concluded that this commitment “would contribute to satisfying the conditions of Australia’s 25% target”, reducing 2000 levels of total pollution 25% by 2020.

That document, and others obtained under Freedom of Information and released today by The Climate Institute, peel back the “lead veil” that Professor Ross Garnaut has described as falling over the eyes of Australian commentators. 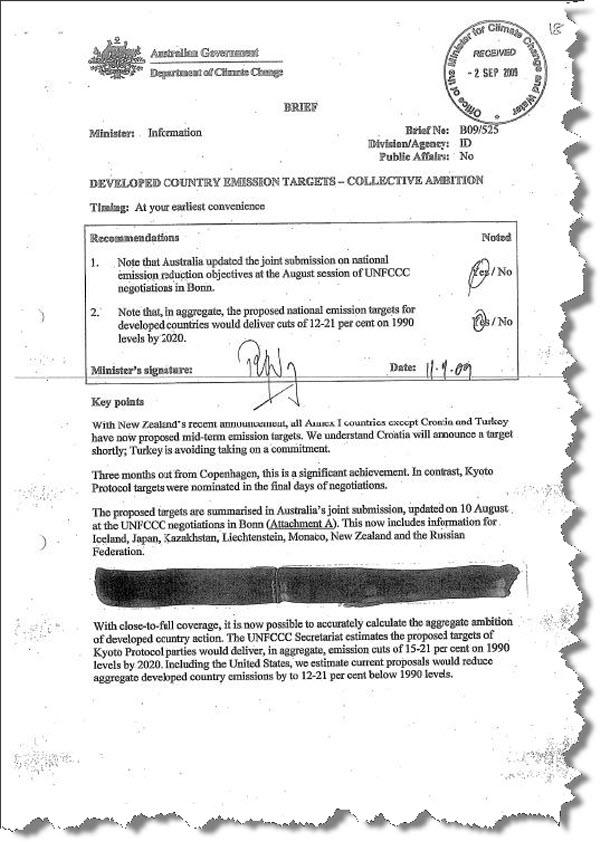 This lead veil is shielding these commentators from the extent of international action on pollution and climate change and allowing them to focus only on the 5% reduction target that has bipartisan backing for Australia’s minimum unilateral action.

Yet both parties still back conditions on international action that would see Australia doing more on pollution reduction, up to that 25% target.

Why do these numbers matter? Last week The Climate Institute released modelling of Treasury analysis that showed that if a pollution price was set at levels for the 5% target but Australia was called on to do more towards a 15% target. It revealed that under this scenario the Budget and taxpayers, householders and business, would have to cough up almost $18 billion to meet the shortfall.

These numbers also matter because Australia, having the highest pollution levels per person, being the largest exporter of coal, and having an economy still adding tens of thousands of tonnes of pollution each year to its more than half a billion tonnes annual belching, has three great risks in addition to the multi billion dollar taxpayer exposure.

Our first great risk is that we are left behind the already emerging global low pollution economy. Global clean energy investments topped $38 billion last year with Australia left far behind.  Peering through the veil at the pollution pricing impact of direct and indirect policies on competitor countries electricity sectors reveals Australia is well behind the efforts of the UK, China and even the US and Japan.

Our second risk is that other countries, particularly those in Asia and Europe will start to penalise Australian exports for our mediocre efforts to address our leading pollution levels.  India already does this to some degree, Europe is increasingly looking at this and China is unlikely to be reluctant if it matches its goals on energy security, pollution reduction and climate change.

The third great risk is, of course, from climate change itself. As the FOI documents clearly and repeatedly comment, it is in Australia’s interests to act decisively at home and helpfully abroad as “Australia is expected to suffer greater harm from unmitigated climate change than most other advanced nations”.

The FOI documents reveal a genuine and intense Australian diplomatic effort to match these concerns before and at Copenhagen. As UN climate talks open in Cancun today, and as we gear up for next year’s national debate on pollution reduction policy, it is important to be clear eyed.

The gloom of Copenhagen lifted to reveal a historic political agreement to avoid global warming of two degrees above pre-industrial levels. There is significant, if still patchy and insufficient, international action on pollution and climate change.  Yet, despite political setbacks in the US and Australia, other countries are pressing on with action.

Other countries commitments mean that Australia faces a pollution reduction effort of at least 10%-15%, possibly 25% by 2020. (Click on the image below for large version.) The government is missing the point today if it is claiming there is no obligation right now to go beyond the 5 per cent minimum as “there is no robust global agreement”. Putting aside the question of whether the Copenhagen Accord is an agreement, the point is that domestic pollution reduction policy to be sorted out next year needs to have flexibility — a point the Department also made in the FOI documents. And yes the CPRS had that flexibility.

We hope for solid progress in Cancun but, whatever the outcome, Australia needs to get cracking to put in place a domestic pollution reduction policy that allows Australia to meet at least the full range of targets its committed to domestically and promised internationally.

This may need to come in stages, and will need action on energy efficiency, clean energy and carbon farming as well as pollution pricing. Above all, our policies need to have major polluters taking responsibility for their pollution and seeing clear limits on Australia’s pollution that stops it rising and has flexibility for strong reductions.

Australia can speak with authority at Durban climate talks

“Australia is expected to suffer greater harm from unmitigated climate change than most other advanced nations”.

And we all know just who in Australia will suffer the most. It will every single person who is not very rich. It will be the kids. It will be our future generations. It will be sooner rather than later and it will be sad.

This is not about supporting a political team, it’s about wanting the best for your own kids.

[“It revealed that under this scenario the Budget and taxpayers, householders and business, would have to cough up almost $18 billion to meet the shortfall.”]
$18 billion, is that all? A pittance. A walk in the park, as we are being assured on a daily basis.

– Barely half the price tag of an NBN which could have been done adequately for $4.7 billion.
– Less than half the price tag of the stimulus plan which could have been done just as well for $10 billion.
– Less than half of this year’s insignificant budget deficit of $41.5 billion
– Only slightly more than the $14.8 billion by which net government debt will increase between now and next financial year (Treasurer’s mid-year economic and fiscal outlook 2010-11, page 49)

$18 billion? For a minute there I was worried you were going to talk about real money.

It would be nice if someone other than the greens took this stuff seriously enough to do something about it……soon.

Thanks, Crikey, for bringing these clear national undertakings to our attention. The politicians have nowhere to hide.

JohnB – unfortunately they have the perfect hiding place, in FULL PUBLIC VIEW, and yet we still allow them to waste oxygen.