What’s the deal with recycled water?

Recycled water. It’s used in a variety of everyday situations -- irrigation, factories, toilets. As one of the driest continents on earth, we’ve become used to it. But what about drinking it? Is it as dangerous as people think? And, with large parts of Australia coming out a big drought, should we be even worrying about it?

Recycled water. It’s used in a variety of everyday situations — irrigation, factories, toilets. As one of the driest continents on earth, we’ve become used to it. But what about drinking it? The mere thought of taking a big swig of recycled effluent is enough to send even the strongest of stomachs rushing to the shops to stock up on Mount Franklin.

But is it as dangerous as people think? And, with large parts of Australia coming out a big drought, should we be even worrying about it?

Where does recycled water come from?

Recycled water comes from a range of different sources. It can come from rain caught on roofs or through water tanks, from stormwater that has been caught after hitting the ground, through grey water from use in the home and through effluent treated from a sewage treatment plant. Currently, most water agencies have water recycling programs in operation.

In Australia, recycled water is being used in many ways that don’t involve drinking, including to water household and municipal gardens, flush household toilets, irrigate recreational parks, in the cooling of power stations and in the irrigation of agriculture and horticulture.

Will we be drinking it soon?

As yet no states are drinking recycled water, although there have been some trials. In south-east Queensland, plans are afoot for recycled water to be introduced into the drinking water supply when dam levels reach the 40% trigger level. At the moment it appears that is unlikely in the foreseeable future, after strong winter rains filled their dams to capacity. In parched towns such as Toowoomba, residents have so far blocked plans to introduced recycled drinking water.

Over in WA, a $50 million trial started today for recycled water to be filtered and stored between 120 and 220 metres underground before being pumped back into the water supply. If that trial is successful, Perth residents could be drinking recycled water as early as 2015.

In microfiltration, the treated used water is passed through fibres that work as microscopic filters. Each fibre can filter out anything above 0.1 microns in size. Reverse osmosis involves applying pressure for water to flow through a membrane, which removes dissolved materials. Finally, the water is passed through an ultraviolet light as a safety back-up to remove any bacteria or viruses left behind.

Under the WA plan, water would not then pumped into the supply, but would instead be stored in bores underground and monitored for its purity.

water supply, based on our own research and similar studies elsewhere, does not appear to impose
any additional risk, and an argument could be posed that the recycled water is of higher quality than
the current conventional water sources.

According to experts from the Advanced Water Management Centre at the University of Queensland, no it’s not.

In a paper released recently they wrote that, “from a scientific standpoint, the addition of purified recycled water to the drinking water supply, based on our own research and similar studies elsewhere, does not appear to impose any additional risk, and an argument could be posed that the recycled water is of higher quality than the current conventional water sources”.

Do they drink it overseas?

There is currently a water recycling project in Orange County, California. In a project similar to the WA trial, municipal waste water is purified then injected into the water table. According to its website, the OC Groundwater Replenishment System has produced more than 50 billion litres of drinking water since it opened in 2008.

Singapore’s water agency currently mixes recycled water (which it has dubbed NEWater) with regular water in the reservoirs before it undergoes conventional treatment at the waterworks for supply to the public for potable use. At the moment about 1% of Singapore’s total daily water consumption is recycled water pumped into reservoirs. That amount is planned to increase to about 2.5% by 2011 next year. 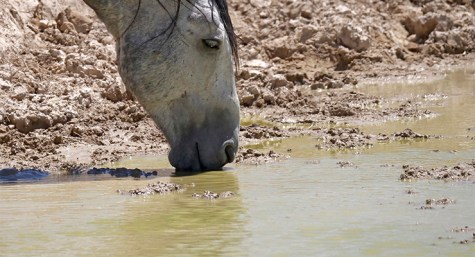 How to survive a megadrought: lessons from America

does Crikey centralise its sub-editng also?

Having just read an article lamenting the loss of subeditors on the Norther Territory News I was wondering where the ultra-violent light treatment of recycled water came from.

Of course it has to be ultra-violent light, otherwise how would it kill all the germs?

Everyone sourcing water from the Murray/Murrumbidgee system below Canberra drinks water that has been through the Lower Molonglo sewage treatment plant. That includes Adelaide.

Is it dangerous if “the system” breaks down?
“Privatisation”. “Profits”. “Records”?

ALL water is re-cycled!!!

it’s just a matter of how many steps removed from the source…
there’s the question. What is acceptable?
no whether it is recycled or not.
the water once captured is lowwer cost to treat than to re-captrue new water

it’s all about efficency, not water conservation!
water is conserved regardless of what humans do

just like energy conservation – it’s about the efficiency not whether it is conserved (which it is!) or not.
basic year 8 science!
the teenagers have been asking this question for 30 years…the answer?
politicians don’t know, and are not serious!
the more things change..