On the Sydney Morning Herald website, an ad for flights to Hawaii beside a story about an Australian man who died flying a plane to Hawaii. Classy. Plus, other media news for the day.

SMH ad blunder. This is truly horrible. On The Sydney Morning Herald website, an ad for flights to Hawaii beside a story about an Australian man who died flying a plane to Hawaii… 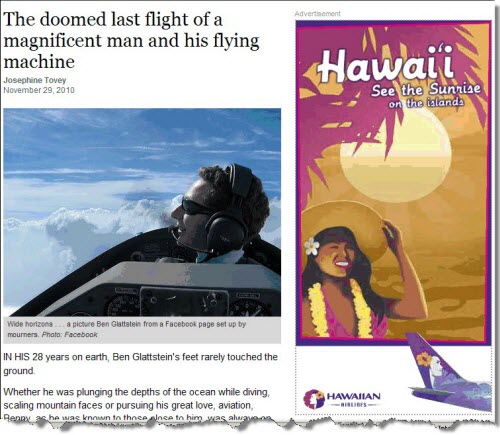 Like mother like daughter. Mining magnate Gina Rinehart was granted a seat on the Ten Network board on Friday — not her daughter Bianca, as The Australian would have you believe…

Why we’re tuning out of political reporting

“Mainstream media coverage of elections is declining and audiences are increasingly tuning out to political reporting. This, according to a book out this week, but which trend came first?” — The Australian

“Amid all the gloom and doom of newspapers limping or folding, there’s a ray of hope in the print media landscape, thanks to innovative thinking and risk taking by publishers and editors who recognize opportunities to be seized at the right time.” — The Huffington Post

“It would be an understatement to say this has been a difficult year for journalists in the subcontinent. In Pakistan at least a dozen media professionals have died in terrorist attacks throughout the country. At least one journalist, Vijay Pratap Singh, has died in India as a result of similar violence.” — The Guardian

“In a report marking his first year at the helm, of the Press Council, Prof Julian Disney signalled that 2011 will see a ‘standards review project’ looking at the organisation’s code of conduct and suggested that ‘serious bloggers’ might be encouraged to join.” — Mumbrella

“Pirate Bay’s co-founders today lost their appeal against convictions for encouraging illegal filesharing, and have had their collective fine increased by $2m (£1.3m) to $6.5m (£4.1m).” — The Guardian

“Canada is to get a conservative all-news TV channel after the CRTC on Friday granted Quebecor Media a license to launch Sun TV News nationwide. The upstart cable channel, dubbed Fox News North by liberal critics, has the go-ahead to launch on January 1, 2011, with the moniker Hard News and Straight Talk.” — The Hollywood Reporter