Walkey Award-winning Today Tonight reporter Tim Noonan has been slapped by police with three infringement notices totalling $3300 after he allegedly supplied liquor to minors in pursuit of a story. Plus, other media news of the day.

Tabloid TV underage grog fine. Walkey Award-winning Today Tonight reporter Tim Noonan has been slapped by police with three infringement notices totalling $3300 after he allegedly supplied liquor to minors in pursuit of a story. According to Police, Noonan allegedly purchased beer and pre-mixed spirits from a local bottle show which was subsequently supplied to children:

“The alleged offences occurred during filming for a story about youth crime in the Tweed Heads/Kingscliff area that aired nationally on a tabloid television program in June this year,” said the NSW Police in a statement. “Yesterday (Wednesday 24 November), police issued the man three infringement notices totalling $3300 for the offence of ‘supply liquor to a minor on other premises when not parent or guardian’.”

The fine comes after Media Watch picked apart a Noonan Today Tonight story about “gangs of kids” who were “terrorising entire neighbourhoods” of the NSW border town of Tweed Heads. According to the program, Noonan had promised alcohol and cigarettes to any kids who agreed to take part in his story. Police decided to investigate, while Today Tonight EP Craig McPherson stood strong, telling Media Watch that “Tim Noonan did not offer or supply alcohol or cigarettes to anyone”.

Channel Seven are standing by Noonan, despite the reprimand, with McPherson telling Crikey he’s “100% supportive” of its reporter: “Tim is yet to receive the infringement notices. If and when they do arrive he will then decide on what course of action to take. The report in question dealt with a number of issues, among them the failings of the local police according to the local residents. The same police have spent months on this matter and have come up with three infringement notices, something akin to a traffic fine.”

McPherson also said that Noonan was “innocent until proven guilty” and that any suggestions of disciplinary action by Seven were “absurd”. — Tom Cowie

Today‘s schoolies ‘wedding’. Schoolies is always a big time for the media, what with all those potential yarns about boozed up teenagers cruising the Gold Coast looking for trouble. So how about this for a feel-good story? 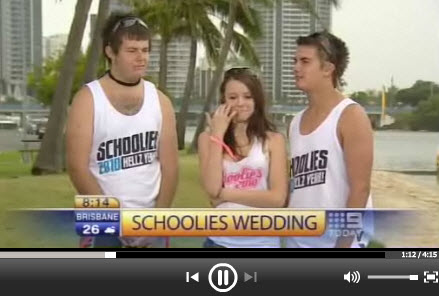 Instead of the typical rampant underage sex narrative the media likes to run with, two kids decided to get married. Host Lisa Wilkinson asked about their vows, whether they would be moving in together and how they got to know each other. She even spoke to the “best man”.

Except they weren’t actually married — they are both 17, which Wilknson handily pointed out halfway through for everyone — and this wasn’t actually a story. — Tom Cowie

AG calls for media to agree to security curb

“For the first time since the Cold War, the federal government has called on the media to agree to a national security protocol for reporting sensitive information.” — The Australian

“In a letter to ABC news director Kate Torney, the group of 43 top correspondents, producers and cinematographers says: ‘We believe that sacking or making locally engaged staff part-time or outsourcing their functions will compromise the safety and security of ABC personnel’.” — The Australian

Paywalls may not be the answer for Fairfax

Now you can use your iPhone to fight cancer

“The phone’s multitudinous user base in Australia now has easy access to up-to-the-minute and location specific advice on UV levels, and when sun protection is necessary.” — The Age