The Liberal Party is set to deny John Brumby his first election victory and seize power in Victoria, according to a Morgan Poll conducted exclusively for Crikey.

The Liberal Party is set to deny John Brumby his first state election victory and seize power in Victoria, according to a Morgan Poll conducted exclusively for Crikey.

As both major parties wrap up their election pitches, and campaign workers settle back to wait for judgement day, the telephone poll of 1,000 voters shows the Ted Baillieu-led Coalition recording a late surge with 51% of the two-party preferred vote compared to Labor’s 49%.

The result, if it was mirrored at the ballot box, could go close to delivering Baillieu the 13 seats he needs to form majority government and end 11 years of ALP rule.

However, both the betting market and poll respondents are bracing for a Labor victory, with 61% saying the ALP “will win” the election compared to just 21% who think the Coalition is poised for glory. Brumby has also prolonged his lead in the preferred premier stakes, with 43.5% (down 4%) favouring him against Baillieu on 39% (up 3.5%).

In the inner north, where the contest is between Labor and the Greens, Morgan says the result is very close, with the combined 2-party preferred vote in Richmond, Brunswick and Northcote having the ALP slightly ahead. In the seat of Melbourne the vote is split at 50/50. Data personally compiled by the Victorian Greens titular head and impressive numbers man Greg Barber also suggests a straight 50-50 divide as voters look deep into their souls following the Liberals decision to preference his party last.

Morgan polling scion Gary Morgan told Crikey that the Baillieu bounce could be partly explained by a voter backlash over rehashed Labor television advertisements that highlighted the Liberal leader’s complicity in a series of real estate sell-offs in the mid-1990s:

“The real change which came in the last week coincides with Labor’s anti-Baillieu ads inferring a Ted Baillieu link to corruption in sales of Government schools many years ago which generated across Victoria a huge amount of publicity, condemnation and public debate via talkback radio about the inappropriate ads; Ted Baillieu now has a higher approval rating  (40%) than John Brumby (34%) whose disapproval is now 46.5%.”

Morgan said the big issues in Victoria remained health, education, crime, public transport and drugs, however government transparency and corruption continued to dog Labor and surprisingly many voters had begun to look to the Coalition on hospitals and schools.

The margin-of-error on the poll, conducted over four nights, is 3.1%, however today’s Galaxy effort also appears to have caught a late Liberal surge, in similar circumstances to Tony Abbott’s  in the final days before the federal election. At the South Australian poll earlier this year, Mike Rann managed to win power with just 48.5% of the vote, suggesting that tomorrow’s result will go down to the wire.

The Age, the Herald-Sun, The Australian and The Australian Financial Review have all stumped for Labor, adding to last week’s endorsement from the Sunday Herald Sun and a fence-sitting effort from The Sunday Age.

Meanwhile, last-ditch campaign literature continues to swamp letterboxes across the state, with some surprising inclusions:

— Ted Baillieu has such a strong anti wind-farm stance that industry spruikers recently took the highly unusual step of purchasing a large colour ad in The Age opposing his policy: 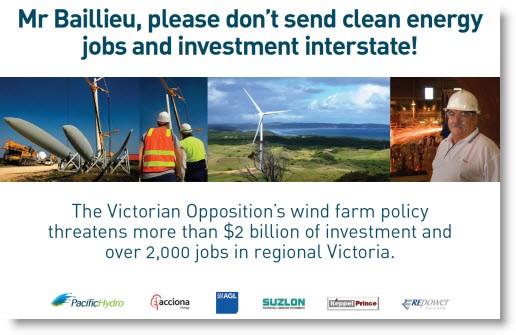 The Clean Energy Council has been outspoken in their opposition to the Libs’ wind stance, saying it would effectively end wind farm development in Victoria and devastate local communities. Interesting then that recent Tory election spam sent to voters featured a prominent photo of the shrines to visual pollution as part of the party’s plans “to reduce emissions”: — The Greens’ s-xual slavery crusader in Richmond Kathleen Maltzahn may have already abandoned her flock if her party’s latest campaign literature is any guide. On the flipside of a recent direct mail offensive sent by the Greens from “former Labor voter” Alison Parkes (remember her?), Maltzahn is listed as the “candidate for Northcote”, displacing the actual candidate Anne Martinelli. This is second Greens flyer SNAFU following its unfortunate suggestion yesterday that the ALP still takes money from Big Tobacco, which prompted a letter to the Victorian Electoral Commission from ALP State Secretary Nick Reece. However, while Labor formally jumped off the cancer stick gravy train in 2004, it still retains very strong links to the industry, as Crikey detailed in August: — Meanwhile, in the actual electorate of Northcote, Labor, under the savvy guidance of dumped party secretary Stephen Newnham, has launched a last ditch effort to kill-off those nasty Greens still reeling from the Libs’ decision to list them last on their how-to-vote cards. Much was made of Newnham’s rogue campaign on behalf of his wife Fiona Richardson a few weeks ago, but the piece de resistance is surely this missive sent to residents this week from “local resident” Clare Burns, who, having “weighed up the choices” at this state election, and “having thought about it”, has decided to back Labor. The only problem being that Burns appears to have made her mind up well before the campaign even began. Way back on August 22, she declared over Twitter that she was “ALP til I die”. And while watching Q&A on August 9, she “blamed the Greens for the disgraceful shut-down of the action Labor tried to take on climate change”. The more things change… It may be that only with the next defeat will Labor have the total collapse it really needs to reconstruct itself.

The lie of the Liberals' claims of liberalism is again laid bare — they scorn the value of anything but power in the name of power itself.

When it comes to winning the Eden-Monaro byelection, the stakes are much higher for Labor than the Coalition.

I will wait for the real poll tomorrow thanks

Very close isn’t it – certainly there has to be the possibility of yet another Hung Parliament – to follow the examples of the ACT, Tasmania and Federally.

I guess it will still all depend on those Inner Melbourne seats and whether the Greens can grab any.

If Bailleau wins it will also be because many former staunch labor voters aren’t game for another four years of disastrous government focus and Brumby arrogance. This reaction may unfortunately prejudice the chances of MPs who have done a sterling job in their local electorate.

Well anyone who believes this is going to happen tomorrow should go and make a killing – flemingtonsportsbet odds are Labor $1-18 Coalition $4-75.

Please do it so Labor’s payout can go up.

I’m with you Davi. Interesting to see what looks like a lot of first time green voters going back to the libs.