NT, the Montara oil spill and the regulatory ‘dog that didn’t bark’

Yesterday Federal Minister for Resources and Energy Martin Ferguson tabled the Report of inquiry into the oil spill at the Montara Wellhead Platform in the Timor Sea in August 2009 -- and gave the NT government the kind of kick in the teeth you'd normally reserve for your political enemies.

Yesterday Federal Minister for Resources and Energy Martin Ferguson tabled the Report of the Montara Commission of Inquiry (the Borthwick report) into the oil spill at the Montara Wellhead Platform in the Timor Sea in August 2009 — and his statement to federal parliament delivered the Northern Territory government the kind of kick in the teeth you’d normally reserve for your enemies — not your (notional) political brethren.

NT Chief Minister Paul Henderson has made much about the NT’s bright and shining future as a resource exploitation hub — most of it based around the once pristine Darwin Harbour. But Borthwick’s report has now raised some very real questions about the competence of Henderson’s minority Labor government and bureaucracy to properly administer even relatively small scale resource projects such as the off-shore drilling program in the Timor Sea — let alone massive projects such as the planned $20 billion Inpex development planned for Darwin Harbour.

Borthwick’s report sheets the primary responsibility for the spill to the company that operated the rig:

“PTTEP Australasia (Ashmore Cartier) Pty Ltd (PTTEPAA) did not observe sensible oilfield practices at the Montara Oilfield. Major shortcomings in the company’s procedures were widespread and systemic, directly leading to the Blowout.”

That is serious enough but Borthwick’s report also damns the regulator of PTTEPAA’s operations — the Northern Territory Department of Resources (the NT DoR):

“Well control practices approved by … the Northern Territory Department of Resources most likely would have been sufficient to prevent the Blowout if PTTEPAA had adhered to them … However, the NT DoR was not a sufficiently diligent regulator: it should not have approved the Phase 1B Drilling Program for the Montara Oilfield in July 2009 as it did not reflect sensible oilfield practice; it also adopted a minimalist approach to its regulatory responsibilities. The way the regulator (the NT DoR) conducted its responsibilities gave it little chance of discovering PTTEPAA’s poor practices. In this case, the regulatory dog did not bark.”

Borthwick’s goes on to examine the circumstances of the blowout and subsequent spill and the reaction of the various players to it. Much of that can wait for another day. For present purposes the report’s comprehensive examination of the litany of failures of the NT DoR to properly administer its responsibilities — Borthwick devotes 73 of the 342 pages of the substantive report to the regulatory regime — is wholly remarkable.

In its submissions to the inquiry the NT government contended that “at all material times prior to the [Blowout], the Territory appropriately administered the licence area within which the Montara Wellhead Platform is located” (emphasis added). Borthwick gives this proposition very short shrift, dismissing it with “no hesitation” and noting that the NT DoR “made a major error when it approved the Phase 1B Drilling Program” two months prior to the blowout of August 2009:

“…none of this was apparent to the NT DoR. It also appears unlikely that the NT DoR would have become aware of most of these deficiencies if this Inquiry had not uncovered them. The NT DoR regarded PTTEPAA as a good operator, although it is impossible to support that conclusion on any objective basis judging by the multiple oversights and failings in the development of the Montara Oilfield. The fact of the matter is that the NT DoR never placed itself in a position so that it could properly inform itself. The relationship between the NT DoR and PTTEPAA had become far too comfortable.”

Perhaps the most damning evidence of the NT DoR’s approach to its role is that it was content to take the operators money for licence and similar fees — but that rather than putting that money into human and technical resources it returned it to general revenue. The NT DoR became a cash cow for the NT government.

The NT government gave evidence that it had great difficulty in attracting suitable staff to monitor operators’ activities because of the significant disparity between the high salaries paid to those working in the private sector and the more modest salaries paid to NT government public servants responsible for the industry’s regulation. NT DoR staff gave evidence that the NT government received significantly more funds from offshore operators that it spent on regulating their activities.

As this table reveals, even in the “normal” years the NT government’s income received from offshore operators far exceeded the amount the NT DoR spent on regulation. Notwithstanding the evidence that the NT government had received — contrary to its submissions — sufficient income to adequately staff and resource the NT DoR as a competent regulatory body, Borthwick has a profound: “…sense of pessimism in relation to whether the Northern Territory will provide the NT DoR with sufficient resources to enable it to ‘punch above its weight’ and effectively regulate operators in its offshore area.”

Predictably the NT opposition has called for Vatskalis’ head. Vatskalis has ignored the call.

The NT Environment Centre has long held serious concerns about the NT government’s competence as an environmental and resource regulator. The centre’s Dr Stuart Blanch told Crikey earlier today that: “Paul Henderson and his government tout the NT as the centre of Australia’s coming resources boom but they have consistently failed to prosecute polluters or to set — and follow — strong legal standards for environmental protection — particularly from the cowboys in the resources sector.”

Crikey asked Vatskalis for comment on the Borthwick report. He did not respond before deadline but yesterday he issued a statement in which he said in part that:

“The Department [NT DoR] should have acted more diligently in its regulatory approach, and following the incident the agency has reviewed all procedures and processes in order to achieve best practice. The Northern Territory government supports moving to a single national regulator of offshore petroleum operations to improve consistency of regulation and improve practice standards. A plan of action agreed to by both the NT Department of Resources and the Federal Department of Energy and Resources has been put in place to improve regulatory monitoring.” 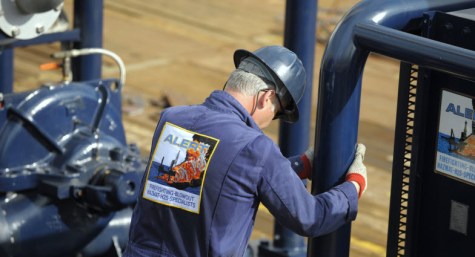 What about our own oil spill shame?

Believe me we in the Top End, drew the short straw with our political people, the old saying if their brains were dynamite, they wouldn’t have enough to blow their hat off.
The territory, has got so much going for it, yet its being squandered, so far they haven’t got anything right, except their salaries

The other interesting point in the government’s response is the fact that, despite the findings of the commission of inquiry pointing to widespread and systemic procedural issues causing the blowout (that is, that there was a culture of cutting corners in PTTEP) … under current legislation the government are only able to issue a ‘show cause’ notice where there has a breach of the act has been identified (point 23) – i.e. they could only revoke the Montara licence, and not the dozen or more other licences PTTEP have in Australian waters.

Given the evidence we’ve no reason to believe that what happened on Montara was an exception, and their other operations might be just a shoddy…

Meanwhile PTTEP aren’t short of money, having forked out $2.28B US overnight to buy shale oil interests in canada.

Who would have thought that “self-regulation” and a government watch-dog overseeing that “regulation” in an industry that government was so “reliant” on, would “flock up”?

man, Ferguson has done PR choreography on this from the start. He put Laurie Oakes onto Senator Siewert for daring to challenge the rate of spillage, and when Oakes finally realised he’d been played, put Bob Brown on to take revenge on Sunday 9.

Ferguson now waits for blanket coverage of a human tragedy to release a report he’d had for “months”, and kept back from the election.

Man, no one expects the NT Govt to be resourced enought to do national regulation. Ferguson knows that. They are just the patsy.

This is oil drilling by international firms in an area sensitive to Indonesia, with a $30 billion project in the balance depending on how the public perceive govt rigour in regulation.

This has been one of the most shockingly, cynical, cold blooded attempts at cover up behind the bodies of 28 miners, that I’ve ever seen in Australian politics.

Ferguson should go. He should go today. He should have gone on day 74. He is a failed minister, and a curr.

It was only the biggest oil spill Australia’s history quite comparable to the Exxon Valdez in volumes spilled. The man is a professional disgrace. And from the tone of his sophistry on abc RN this morning, I would say he actually knows it.

A more pathetic excuse for a politician would be hard to find this century.

AMSA dumped its toxic brew of six different types of dispersants (Slickgone NS, Slickgone LTSW, Ardrox 6120, Tergo E40, Corexit 9500 and Corexit 9527) on the Montara oil slick and Australia’s regulators allow for these dispersants to be applied neat from aircraft or vessels.

The very naïve Martin Ferguson at the time downplayed the size of the spill and said that the negative effects of the catastrophe would be minimal – a not so astonishing declaration by industry’s Yes Man and head of the prankster teams ‘regulating’ Commonwealth waters and from one who is accustomed to duck-shoving his responsibilities onto state ‘regulatory’ agencies.

The saga becomes even more perplexing given that the Montara oil platform is off the coast of WA, yet the NT DoR were the regulatory agency? The tenet of regulation in this country is based on the premise that the ongoing management of safety is the responsibility of the operator and not the regulator. Simply put, the industry is self-regulated, glaringly evident in Texas oil and gas giant’s Apache project on the once pristine Varanus Island in WA and its gas explosion which wiped out a third of WA’s gas supplies in 2008.

Just two inspections of the Varanus pipeline had been carried out in the past 16 years, while there had been no inspection at all by an Intelligent Pig, a standard inspection device which travels along the inside of the pipeline. The Commonwealth’s National Offshore Petroleum Safety Authority found that ineffective anti-corrosion coating on a sales gas pipeline was one of the major causes of the explosion.

An anonymous worker claimed that the “big bang” had occurred because the pipe had corroded “to the thickness of a match stick. ” The preliminary reports say a lot about Martin Ferguson and NOPSA’s inspections and ‘enforcement’ policies, prior to the event. The final report on the explosion, after some 2.5 years, has yet to be released.

And so in response to the Montara report, Mr Ferguson boasts that the “Polluter Pays” principle will now be enforced after future catastrophes. Well hello there Mr Ferguson – the PP principle was written into the Environmental Protection Acts around 1971 while the taxpayer has picked up many of the tabs. Then we have the corrupted Precautionary Principle which makes a complete mockery of the EPA’s brief to protect the environment.

The one certainty that the Australian public can rely upon is that Mr Yes Man Ferguson will remain captured by industry’s grim reapers.