Two days out from a state election in Victoria and the ALP must have been quite chuffed with the puff piece that appears on the front page of today's Ballarat Courier. Plus, other media news of the day.

ALP gets a free kick from The Courier. Two days out from the Victorian state election and, with polls predicting a swing to the Coalition, any kind of positive publicity for the incumbent Labor government is worth its weight in gold. What that in mind, the ALP must have been quite chuffed with the puff piece that appears on the front page of today’s Ballarat Courier lauding Premier John Brumby’s announcement of $30 million in funding for the town’s Eureka Stadium and the prospect of AFL matches at the ground. 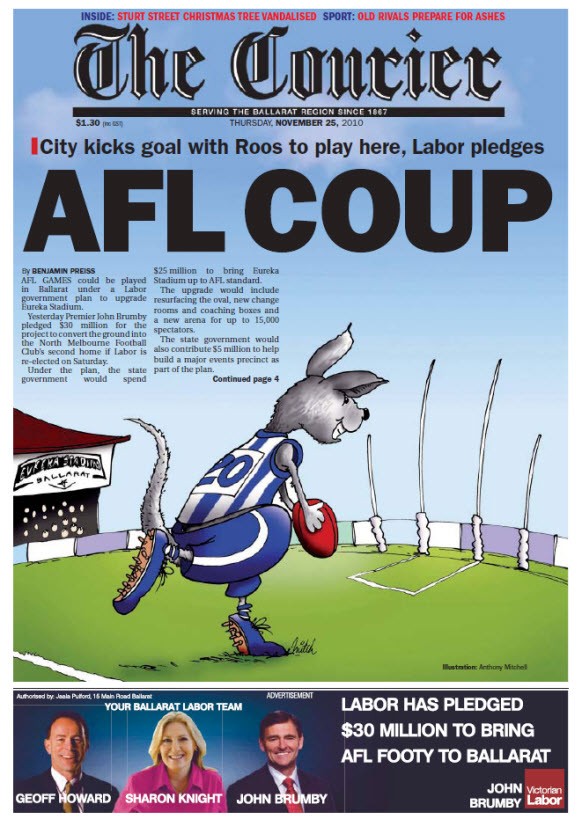 With a circulation of 19,163 and a readership of 77,000, front-page treatment at the Courier is nothing to sneeze at. But, with a corresponding ad for the party directly below the yarn, the line between advertising and editorial at the Fairfax paper certainly seems a little blurred — to say the least. Labor currently holds Ballarat West by 6.5% and Ballarat East by 6.6%. — Tom Cowie

‘Good news’ at The Age. Wraparound ads aren’t new, but if you’re going to run a huge front page ad that creeps over your masthead it is probably a clever idea to consult somewhere along the line with the editorial team. Well, you’d hope that’s what they’re thinking down at The Age this morning, after their front page story about the New Zealand mine tragedy was covered by a giant ad for theme parks. 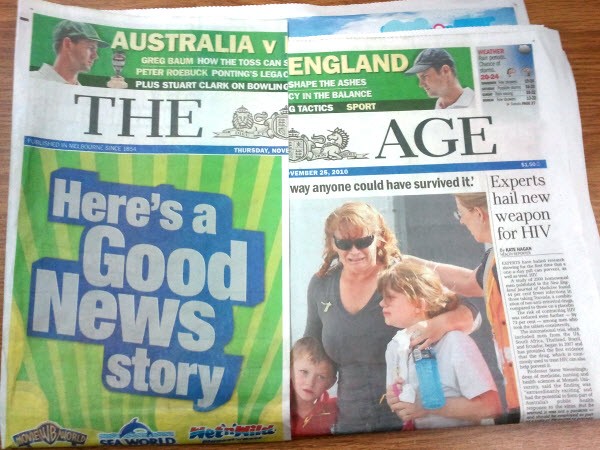 In one of the more spectacular examples of poor ad placement we’ve seen, a moving picture of a grieving woman and her two children is positioned next to the words “Here’s a good news story” — which is referring to discount entry to the Queensland theme parks. Lift off the colourful wraparound and, instead of good news, you’ll find one of the more tragic stories of the year. In all likelihood the theme park ad was probably booked long ago — well before news broke of the Pike River disaster — but it’s times like this when you realise how much precedence advertising takes over news. — Tom Cowie

Tasteful online ads at Fairfax. And another poorly-placed ad from Fairfax, this time from the online team. Yes, it’s a spot thats runs before a Fairfax video news autoplay story about the miners. Yes, that is a person buried in popcorn. 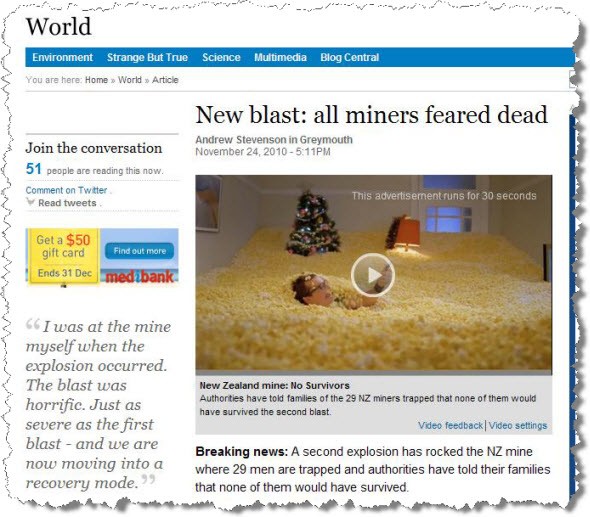 “In a passionate defence of the new online world, Mr. Scott said media organisations like the ABC and The Australian needed to accept that the days they exclusively controlled the news agenda are gone.” — The Australian

US Congress on alert for more WikiLeaks documents

“The US state department has warned Congress it expects a damaging release of sensitive diplomatic documents by the WikiLeaks anti-secrecy website.” — The Guardian

“Host of Freedom Watch on Fox Business Andrew Napolitano was asked in an interview this week for his view on conspiracy theories suggesting the US Government forces were responsible for blowing up the World Trade Center 7.” — Huffington Post

“Richard Branson announced on Wednesday that he plans to unveil an ‘iPad magazine’ in New York next week — a publication that, depending on its frequency — could pose a threat to Murdoch’s so-called ‘Daily’, or, at the very least, take some of the spotlight away from the Australian billionaire’s quest to be first to market.” — The Wrap

“An epic family power struggle is unfolding at the heart of one of Germany’s largest media empires over a father and son’s personal — and public — battle over its future. Alfred Neven DuMont, the 83-year-old patriarch of the media group DuMont Schauberg (MDS), is locked in a row with his son and heir, Konstantin, after the latter called for his father’s resignation.” — The Guardian

“This week, Leno stole a bit for The Tonight Show from a VH1 blogger, got caught and — unlike his years of mugging David Letterman and Howard Stern — was forced to admit it.” — The Wrap

Crikey’s had a busy time spotting errors/typos/ poor placements in
newspapers and their websites, be nice to get a balanced view by doing the same of other online media and their odd mistakes…at least occasionally