The Victorian election gets dirty

The ads are simply a re-edit of ads run at the last state election so we have to contemplate two possibilities:

And finally what was Ted thinking when he issued a writ that won’t be heard until February next year? This has not stopped the ads running, rather than chasing an injunction that could have stopped the ads now. Even if he wins the court case in February if he is still in opposition, so  it will be a hollow victory at best for what will surely by then be a former opposition leader if he is not successful on Saturday.

Pobjie on the monarchy:

Douglas Clifford writes: Re. “Pobjie: Republicanism, like suicide and Peter Garrett, solves nothing” (yesterday, item 5). Thank you, thank you, thank you for Ben Pobjie’s take on the monarchy/republican issue. I have long wanted you to inject some humour back into your site. Now, how about a riposte from the oleaginous David Flint.

Peter Daniliuc writes: Re. “Qantas: no trust without higher thrust”  (yesterday, item 4). Normal service resumes for Qantas. Not only are the A380’s back in the air, but so is the arrogance and rudeness.

I rang the Qantas service centre in Hobart after realising I’d mistakenly booked a return flight from Perth on the same day I arrived. Despite admitting it was my mistake and politely asking for some discretion, I was told bluntly that “… it’s your mistake, you have to pay for it” and “… you can’t expect us to pay for your mistakes”, and better still when I asked to speak with a supervisor “… why can’t you take responsibility for your own actions”.

Barbara no long works at Bankworld, she’s looking to make it big at Qantas!

Shaun Ratcliff, Public Affairs Manager, Victorian Association of Forest Industries, writes: Re. “Give ’em a poll — that might frighten ’em” “Richard Farmer’s chunky bits”  (Monday, item 12). In response to Richard Farmers comments, the Victorian Association of Forest Industries denies using the poll mentioned in the Herald Sun to frighten voters about an increasing Greens vote or any other matter.

The poll was actually commissioned to discover voters’ opinions on forestry policy, with 73 percent supporting current or increased levels of harvesting. This included 49 percent of Greens voters. Of course, we could not dictate how the Herald-Sun used the data we provided, or on which page our involvement was mentioned. We also dispute Mr Farmer’s misguided notion that the sample size was too small and therefore impossible to draw meaningful results from.

If he had any knowledge of statistical analysis, he would know a sample size of 500, if randomly drawn from a population, has a margin of error of between 4-5 percent. The poll was undertaken by Galaxy Research, one of Australia’s foremost polling companies and the sample size in line with a number of other polls regularly commissioned.

Tamas Calderwood writes: Re. “Ask a climate scientist: the Tamas edition” (Monday, item 15). I very much appreciate the responses to the questions I so often (and infuriatingly) raise in this section, however I find them unconvincing.

An answer comes in the response to my other point about the 1860-1880, 1910-1940 and 1975-1998 warming spurts being equal in magnitude. Although she doesn’t directly address their similarity in magnitude, Dr Kelly Halimeda Kilbourne says it’s all due to a coincidence of natural variability. She also adds that “the causes of that variability are currently a very active research topic and there are different competing ideas right now about the causes”.

Let me rephrase that: They don’t know. So if you have no idea what is driving these natural decadal-scale warming/cooling trends, how can you say all the recent warming was man-made? And how can you confidently predict the future if you can’t explain the variability of the past?

Finally, regarding the medieval warm period, Galen McKinley says today’s temperatures have risen by 0.8C since 1880 such that year 2000 was 0.4C above the long term mean as we’ve warmed from the little ice age. Well, that’s kind of my point. Not much is happening.

Dr Cronin adds that looking at the past 8000 years shows lots of climate change and that warming rates during the medieval period “did not exceed recent warming”. Ok, so the rates were about the same then? How do you then leap to saying recent warming can be explained by GHG forcing?  Even if you leave solar and volcanic out, there are still a vast range of factors that can change the environment. Indeed, as Dr Cronin suggests, let’s look at those past 8000 years.

This is a temperature reconstruction from Greenland. The scale is 5 times the normal temperature graphs you see. The past 150 years is about the top half of that upward surge on the far right. 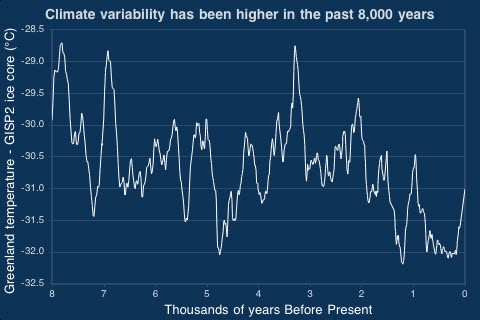 Tamas’s sh_t arguments belong in a peer reviewed environment or a garbage can, not in my face.

Tamas has apparently found a strong linear link between ENSO and climate change. I suggest that he submits this to a peer reviewed journal article, or retracts his comment based on the fact that he’s misunderstood the science.

He also seems to have cherry picked a data source for the Medieval warming period, rather than using the more rigorously acquired data that Dr Cronin used.

“We don’t know” is an acceptable answer to some scientific questions, but alone does not provide falsification for a theory, which I think is what Tamas is suggesting.

Usual delusional gibberish, nothing to see here, move along 🙂

Come on John – why are my arguments wrong? Argue the points please.

The medieval period I selected is quoted from Galen McKinley in his response to my question.

“We don’t know” for natural variability invalidates man made warming because it is most likely natural warming (and not much of it) that we’ve seen. Just like for billions of years in the past.

1. The magnitude of the MWP comes from multiple independent lines of evidence.

But please continue with the delusinal gibberish, it’s a pleasure to watch you make a total idiot of yourself 🙂

Oh yeah, your first point: You claim that a lack of a strong enough ENSO event since 1998 is sufficient to falsify global warming. This demonstrates your total lack of understanding of the theory. ENSO is a phenomenon that redistributes a small proportion of heat on the earth’s surface, it’s quite complex, and the conclusion you draw has no strong theoretical or observational basis.