Swan and the OZ strange bedfellows

Treasurer Wayne Swan cannot be accused of preaching to the converted by taking his thoughts on the future of the Labor Party to the op-ed pages of The Australian.

Worry about the unions, Wayne. Treasurer Wayne Swan cannot be accused of preaching to the converted by taking his thoughts on the future of the Labor Party to the op-ed pages of The Australian. I doubt that there were many potentially faithful Labor Party followers among those readers.  But then again there was probably not much for those of conservative bent who did read it to be frightened about either. It’s pretty easy for politicians of all persuasions to have “prosperity and opportunity” as the two keywords of their belief.

I doubt that the Swan message of “in this debate about our purpose and in this contest for the young, the answer lies not in fringe issues of the far Left but in bread-and-butter idealism that begins with prosperity and opportunity” is going to have Australian youth rushing out to join their local branch. And nor is the attraction that the Greens to idealistic youth that is Labor’s major problem. Far more worrying should be the way that the Greens are encroaching on the very trade union core of the party.

And well she might hide her face! Unless she was just joking, Peta Credlin will have a lot to answer for. My former Crikey colleague Christian Kerr, making one of his rare appearances in his new home The Australian, has written that Credlin in her role as Tony Abbott’s chief-of-staff has written to the coalition frontbench team and senior staff stressing the importance of maintaining pressure on the government throughout the Christmas holiday period. So just when we thought we were going to get a rest from political inanities with the adjournment of federal parliament we are being told it is not to be so.

“We are putting together a media strategy for the Christmas-new year break and want to ensure we have coverage across all portfolios,” says the memo from Credlin.

Opposition spokespeople have been told to inform Abbott of their holiday plans and leave arrangements for press secretaries “so we have a comprehensive contact list”.

We can only hope that Christian has fallen for an elaborate Liberal Party joke. And Credlin does have some form as a humourist as she showed on the campaign trail earlier this year while posing for the cameras at one of her innumerable attendances at a sausage sizzle. 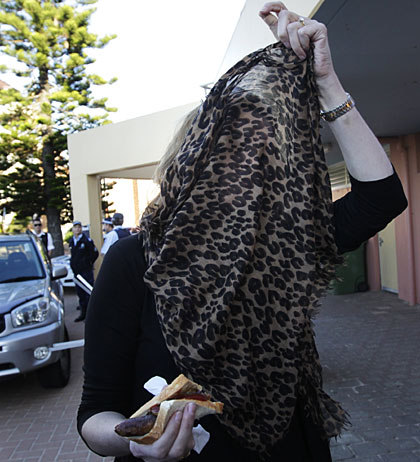 The way the world of political influence works. There’s a wonderful example of the art of lobbying in the current USA Today. The paper outlines how  companies that make the body scanners that are now proliferating US airports go about the business of having government authorities make their products compulsory. 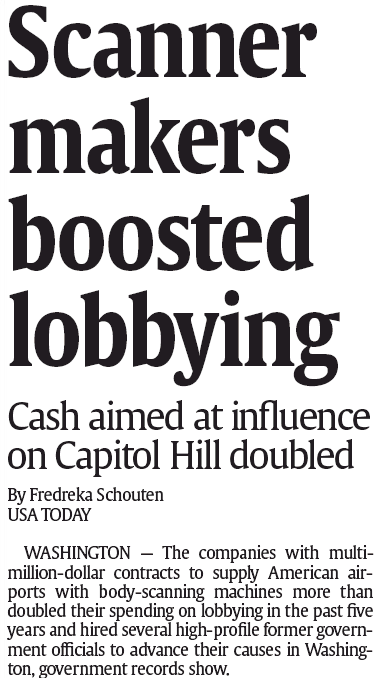 The story records that L-3 Communications, which has sold $39.7 million worth of the machines to the federal government, spent $4.3 million trying to influence Congress and federal agencies during the first nine months of this year, up from $2.1 million in 2005, lobbying data compiled by the Centre for Responsive Politics show. Its lobbyists include Linda Daschle, a former Federal Aviation Administration official.

Rapiscan Systems, meanwhile, has spent $271,500 on lobbying so far this year, compared with $80,000 five years earlier. It has faced criticism for hiring Michael Chertoff, the former Homeland Security secretary, last year. Chertoff has been a prominent proponent of using scanners to foil terrorism. The government has spent $41.2 million with Rapiscan.

“The revolving door provides corporations such as these with a short cut to lawmakers” and other decision-makers, said Sheila Krumholz, of the Centre for Responsive Politics.

Dancing to the White House? First her own reality program on the great Alaskan outdoors. Then a book tour and now Sarah Palin is Dancing with the Stars. Or, at least, making a guest appearance to support her daughter, Bristol, in the great television contest that is topping the American ratings. 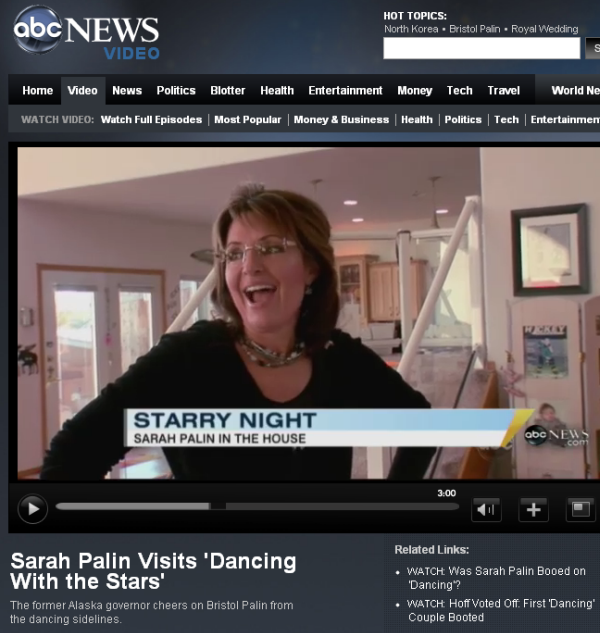 And mum’s popularity isn’t doing Bristol any harm either. She’s getting so many audience votes that some cruel left liberals are alleging there is a Tea Party conspiracy to stack the election!

Peta who? Does she wear Budgie smugs? Ride a bike? Talk with umms and ahhhs and errrs? Have big ears? Certainly talks cr-p.