North Korea attacks: is this war?

Crikey media wrap: In one of the most serious clashes between the bitter enemies in decades, North Korea attacked South Korea yesterday, killing two South Korean soldiers in a shelling spree.

In one of the most serious clashes between the bitter enemies in decades, North Korea attacked South Korea yesterday, killing two South Korean soldiers in a shelling spree.

Around 50 shells were fired by North Korea on to the South Korean island of Yeonpyeong. South Korea immediately fired 80 shells back in retaliation and put fighter planes on alert. The North says the South fired first; the South argues only training shots were fired and not on North territory. CCTV video footage shows residents fleeing and buildings catching fire as the North Korean bombs land.

Yeonpyeong is a contentious island, with North Korea disputing that it sits in South Korean territory and refusing to recognise the island as South Korean. It is along this same maritime border that a South Korean tanker was sunk earlier this year — with evidence that North Korea was responsible, but denials from Pyongyang — killing 46 soldiers on board.

This is the latest battle in a long war, with an interactive map at The Guardian explaining the hows and wheres of over 150 incidents between the two since the “end” of the Korean War (which has never officially ended, a peace armistice was signed). A NY Times timeline shows US involvement in the disagreements.

Is the Kim family trying to prove its military strength, in a country where the military is powerful and critical to power? Kim Jong-un, son of North Korean dictator Kim Jong-il, was appointed as the next leader of North Korea several months ago, paving the way for ascension in the family dynasty. What does this mean for the United States-supported South? Is there more bombings — and deaths — ahead for both nations? Will the Korean borders be changed and finalised?

The White House was quick to condemn the attacks, though no word yet on how it will respond. US senators have called on China — one of the North’s few allies — to condemn North Korea’s actions.

The latest attacks will cause further problems for China — “…the problem of how to manage its Communist neighbor and one-time ally appears to befuddle China’s leaders, who stumble from indulging the North to sending occasional signals of pique, all without making the country adopt a path toward greater openness or stability,” argues Ian Johnson and Michael Wines at the NY Times.

This is typical behaviour from the aggressive — and desperate — North Korea, notes Martin Fackler at the NY Times.

“While the North has sought to send strong, militaristic messages to the United States and its allies in the past, the new provocations have been more forceful and lethal than in recent decades. Analysts say the government may be trying to ensure that the Kim family dynasty continues for a third generation by winning the loyalty of the powerful military with shows of force.

“The escalation may also reflect the increasing insecurity or even desperation of the isolated North, which often has trouble feeding its own population, much less keeping up with the rising technological and military capabilities of the far wealthier South.”

Maritime borders are at the heart of these attacks: “One possible starting point could be talks on the demarcation line in the Yellow Sea,” writes Julian Borger in The Guardian.

Recent developments of the North Korean nuclear program see it being as powerful as Iran’s, say US scientists who toured it earlier this month. Reports say resources are now available for two nuclear bombs to be made per year. And there’s a reason those scientists were allowed into tightly-held country, argues Bill Powell at Time:

“…the timing, with U.S. special envoy Stephen Bosworth in the region, was probably not coincidental. The skirmish comes less than two weeks after North Korea allowed a prominent American nuclear scientist to see a brand-new facility for the production of highly enriched uranium — one of the two possible source materials for producing a nuclear bomb.”

Donald Kirk at the Global Post agreed, noting North Korea is wanting any peace talks on its terms. “It’s as though North Korea had delivered a one-two punch — first showing off its status as a nuclear power and then putting on a display of its skills in conventional warfare.”

A peace deal with the North can be made, if the White House can swallow its pride,  says The Guardian’s Simon Tisdall.

“A deal is doable and desirable, because at heart the Korean issue is not about absolutist ideology or faith or race or even weapons proliferation. It’s a family dispute about money and power — and both are infinitely divisible.”

South Korean newspapers reacted quickly to the attacks, with pages of photos and reports. The front pages of the Dong-A Ilbo newspaper: 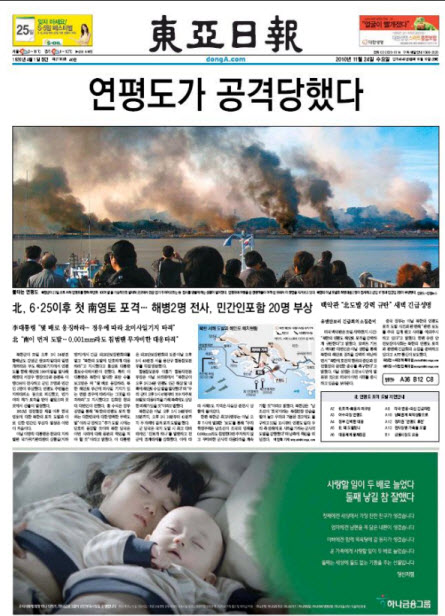 It was a similar story at the South Korean Maeil Business newspaper: For further clarification of exactly what happened, let us zoom in on those infographics. The North Korean government news service is a little behind on the times, with the current lead story “Kim Yong Nam Greets Lebanese President” from November 21. According to reports, North Korea issued a statement saying: “Despite our repeated warnings, South Korea provoked us by firing artillery shells into our territory. Our revolutionary forces countered with stern military actions. It is our traditional military countermeasure to punish perpetrator’s fire with a thunderbolt of fire.”

North Korea is moving towards a nuclear footing and ramping up its aggressive rhetoric. Is it for real? A sham? A danger? Or something in between?

In a new book about what it's like to be the son of Kim Jong-il, Kim Jong-nam, who lives in exile in China, has claimed North Korea's new leader is unprepared and the country will collapse without reforms, reports Andrew Salmon.

Kim Jong-il and Vaclav Havel: a study in contrasts

They died within hours of each other, but North Korean dictator Kim Jong-il and Czech playwright Vaclav Havel were opposites. The key difference: "Kim stood for power without principle; Havel for principle over power," writes Joe Schlesinger.

I don’t know if this is war, but it sure isn’t peace.

That the strike was so blatant is concerning. Unlike the sub attack which could (and is) be explained away with an air of plausible deniability, this is far too direct for comfort. The cynic in me is wondering out loud if we have just found Obama’s Falkland Islands – doesn’t aid any hopes for peace. Thoughts?

(Oh, and can we please phrase our M*A*S*H jokes VERY carefully?)

“…over 150 incidents between the two since the end of the Korean War.” – The Korean War never actually ended. In 1953 the two sides signed an armistice, which is basically an agreement to stop fighting for the time being. The war actually celebrated its 60th birthday in June this year, and by all accounts it is still going strong, with an average of 5 cross-border incidents every 2 years.

Absolutely true Stevo, noted. I have adjusted the copy slightly.