It’s all about the NBN this week…

It’s all about the NBN this week, and interestingly it’s the Shadow Minister who got more coverage than the Minister.

It’s all about the NBN this week, and interestingly it’s the Shadow Minister who got more coverage than the Minister, although that’s not a one week story, Turnbull’s profile has been generally higher since August. Nick Xenophon the other main mover, he and Steve Fielding obviously determined to be key players in the seven months remaining during which their vote matters.

The Victorian election campaign has ever so slowly built up some steam, as some of the polls tighten and the Opposition go back to the old favourite Laura Norder, straight from the Bob Carr playbook on what to do when you don’t have much to say.

The asylum seeker issue seems to be drifting back out of tabloid favour for the moment, with both Chris Bowen and Scott Morrison dropping down the list, and the loyal reader (hi Mum) might notice that six out of the 20 top spots are filled by independent or Green politicians. Sign o’ the times. 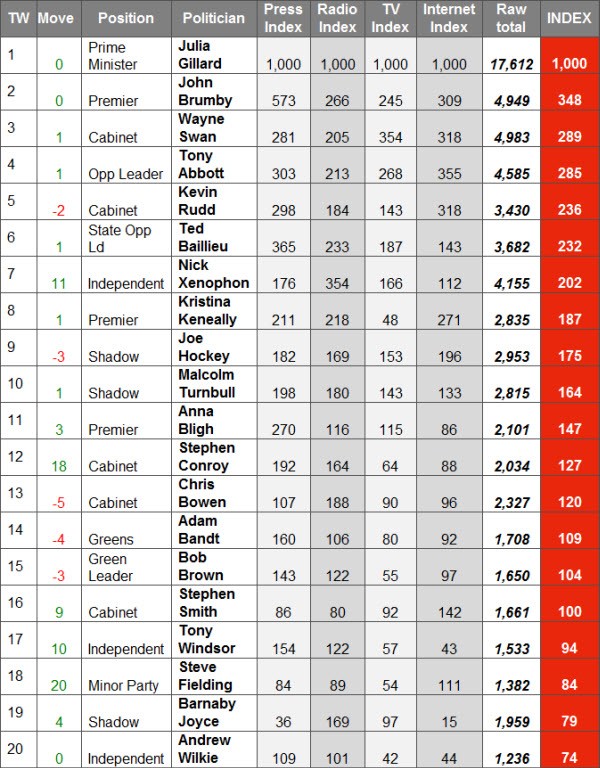 Low volumes continue across talkback, but the Greens remain a boogie man for callers to certain stations.

If I suggested certain parts of the news media are not unhappy to have an excuse to revisit every detail of the Ivan Milat case yet again, that would just be cynical of me, wouldn’t it?