Forget Grog’s Gamut, imagine an entire army of DFAT public servants blogging about foreign policy under their real names (gasp!) while entering into passionate debate with readers. Also, Niki Savva's spray at the PM's appearance and the Herald Sun paragraph so nice they included it twice.

Diplomats should Tweet (maybe not spies). Forget Grog’s Gamut, imagine an entire army of DFAT public servants blogging about foreign policy under their real names (gasp!) while entering into passionate debate with readers. That’s just one of the suggestions being put forward by Lowy Institute fellow Fergus Hanson in a policy brief released today entitled A Digital DFAT: joining the 21st century.

In the report, Hanson argues DFAT needs to embrace “e-diplomacy” before they get left behind by the likes of Canada, the UK and the USA. Because of its incredible popularity, social networking offers interactive engagement with an audience that is “otherwise impossible”, he says. It’s a way of plugging Australia’s exports too, like tertiary education and tourism.

That’s no surprise, considering much of the region are already big users of social media. In Indonesia, a country of 235 million people, 20.8% of internet users are on Twitter. Indonesia also has more than 30 million Facebook users, while Asia boasts more than 90 million users. Currently, DFAT does not have an official presence on Facebook or Twitter. By way of contrast, the US embassy in Jakarta has more than 290,000 Facebook fans.

But it’s not all about Facebook and Twitter. Social networking, Hanson says, is only one limited aspect of e-diplomacy. He also suggested DFAT could better harness the power of digital communication to aid consular work, such as sending warnings to Australians overseas or as a way of communicating with staff in the field. — Tom Cowie

Savva’s sexist spray, or telling it like it is? Niki Savva’s article in The Australian today has certainly reignited the debate about PM Gillard’s appearance — and the appropriateness or otherwise of the media commenting on it. Savva’s article contained advice suggesting a change in leadership style for Gillard, one more aligned to Bob Brown’s. She took on the role of personal trainer…

“A bit of exercise wouldn’t go astray either, a healthy body and a healthy mind and all that.”

And that of personal stylist…

“She should sack her hairdresser (sorry, Tim) get a decent cut and colour, pack up all her clothes and send them to the Smith Family. There are plenty of stylists who can buy her smart clothes that fit her properly. She needs to hire a good one or get the name of the Governor-General’s dressmaker.”

The tweets have been hot to jump on the issue — Savva had hit a “new low” they crowed. “‘Unconventional life choices?’ Is Nikki Savva auditioning to host ‘Ladette to Lady’ or is she genuinely that backward?” asked kanewishart. “Niki Savva ..ask Santa for a 2011 calendar Yours is out of date by a few decades,” said BridgetOFlynn. And as GenderPolitics noted: “According to some, AUS PM Julia Gillard has bad clothes. Do male politicians get articles mocking their fashion sense?” Well, no. — Crikey intern Alison Drew-Forster

Paragraph so nice that included it twice. Was it a case of a simple editing oversight? Or does the Herald Sun really want to make sure Channel 7 gets the message? Whatever the explanation, one paragraph in this important article on the X-Factor finale was deemed important enough to repeat… 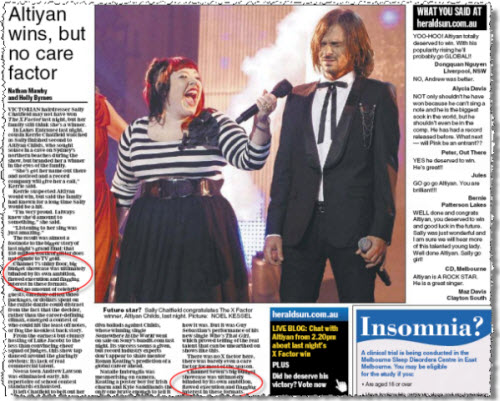 “Our company group is interested in making an investment towards the media business, given its importance to the nation’s future and has selected Channel 10 for this investment.” — The Australian

“Yesterday morning the hard-living 63-year-old Englishman, who wore his white hair in a ponytail and counted the actors Jack Thompson and Michael Caton among his closest friends, was found dead after a suspected heart attack at his apartment.” — The Sydney Morning Herald

National broadcaster to be a pollie-free zone

“Labor is on the verge of winning parliamentary backing to ban former politicians from serving on the ABC and SBS boards.” — The Australian

“From network newscasts to local TV, from newspaper front pages to a blur of web headlines, it seems untold numbers of women are having their breasts touched and untold numbers of men are feeling the intrusive hands of government guards near their packages. Actually, that’s far from true.” — The Daily Beast

President Carter speaks out against the modern media

“The talk shows with Glenn Beck and others on Fox News, I think, have deliberately distorted the news. And it’s become highly competitive. And my Republican friends say that MSNBC might be just as biased on the other side in supporting the Democratic Party, the liberal element.” — TVNewser

“The founders of Path — David Morin, a veteran of Facebook and Apple, and Shawn Fanning, the founder of Napster — say they’re not trying to compete with Facebook. They’re trying to augment it by allowing users to choose a closer circle of friends and perhaps share more intimate details of their life on the Path network than in the broader confines of Facebook.” — Portfolio

“Facebook leads to infidelity, a New Jersey pastor has claimed. To prove his sincere belief in Facebook’s evils, the pastor has even offered to step down over revelations of a past affair that involved a four-way s-xual relationship with his minister wife, a male church assistant and the assistant’s wife.” — CBS News

Actually, male politicians get called out all the time on fashion sense, but it’s usually in fun, and rarely detracts from what they say…

Savvas – give up girlfriend. What’s next? An opinion piece on how you, as a mum, care for the baby, late nights, early mornings, sore body, and the baby’s first word is ‘dad’?