Beaten and bruised: graphic photos of a detention escapee

Crikey has obtained graphic photos of a beaten asylum seeker sent from within an Indonesian detention centre.

Crikey has obtained graphic photos of a beaten asylum seeker sent from within an Indonesian detention centre. The photos, which were taken by a fellow detainee inside Kupang detention centre, have been passed on to the UNHCR and immigration officials in Canberra and Jakarta but so far there has been no official response.

The badly bruised man is an Iraqi asylum seeker, who was apparently bashed for trying to escape from Kupang. A fellow detainee, who has since been released, took the photos and passed them on to refugee advocates. He told advocates that the bashing was not an unusual occurrance. 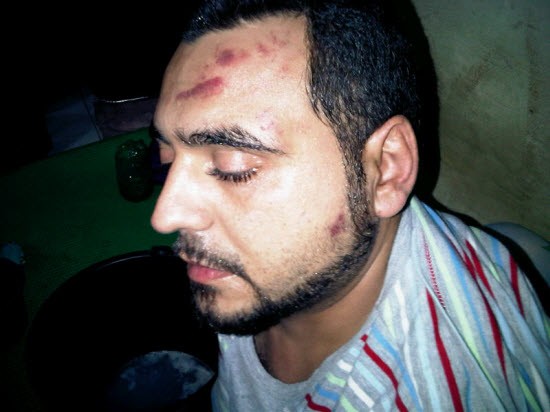 Pamela Curr, a refugee advocate from the Asylum Seeker Resource Centre, says that staff at the detention centre have not been disciplined for the beating, despite Indonesian officials being aware of the photos.

“Australians keep saying over and over ‘why don’t asylum seekers stay in Indonesia?’, well the fact is the conditions there are worse than they used to be,” Curr told Crikey. 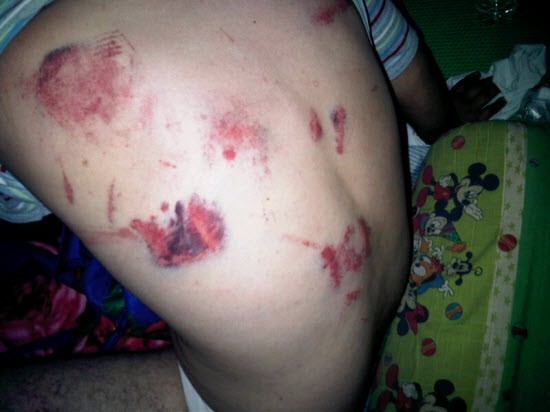 Curr said that, in the past, it was not unusual for detainees to bribe guards at detention centres, who would then “leave the door unlocked”. Guards were still accepting the bribes, she said, but instead were now chasing down the detainees when they tried to escape to prove they were not corrupt. 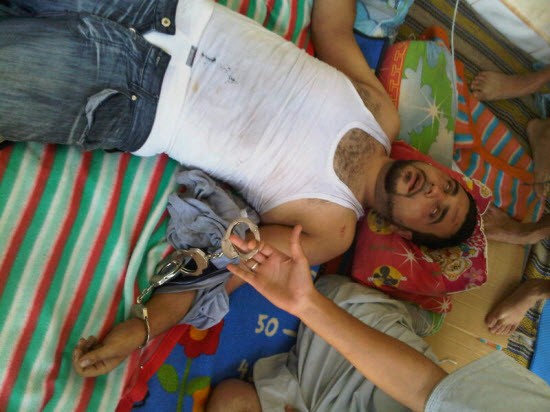 The tough stance from Indonesian officials was a result of political pressure from the Australian government, said Curr. Last year, the Rudd government brokered a deal with the Indonesian government to accept 78 Sri Lankan asylum seekers who refused to disembark from an Australian customs vessel.

The deal, which was backed by millions of dollars in Australian aid, was part of a wide-ranging agreement between the two governments to work in tandem in order seek to discourage people smugglers and detaining asylum seekers.

“Under pressure from this government and the Howard government, the Indonesian government are continuing to detain people to stop the boats,” Curr said. “They keep them locked up even when the UNHCR have recognised people as refugees.”

In an open letter to both federal political parties, Human Rights Watch recently criticised Indonesia for its poor human rights records with respect to their treatment of refugees and asylum seekers. It also held concerns for the apparent use of tasers on detainees in the Australian-built Tanjung Pinang detention centre:

With respect to Indonesia, an independent researcher who visited Australia-funded Indonesian migrant detention facilities reported in November 2009 that “detainees suffer malnutrition, depression, anxiety, skin diseases, vomiting and diarrhoea, and have been subject to violent beatings by Indonesian authorities.” Media reports this June described how Indonesian detention center staff use stun guns on detainees. No apparent effort was made in Indonesia to investigate these reports of ill-treatment or bring the perpetrators to justice. Media accounts have also cited a detainee stating that Indonesian authorities prevented them from meeting with UN High Commissioner for Refugees officials and doctors.

At the recent East Asia Summit, Prime Minister Julia Gillard spoke to President Susilo Bambang Yudhoyono about establishing a new regional processing centre for asylum seekers, despite the fact that Indonesia are not a signatory to the UN refugee convention. Crikey understands that there has been no official response from Jakarta over the photos.

Inside Tanjung Pinang: the future of offshore processing

Inside the Christmas Island detention centre

This is the reality in both Indonesia and Australia and the government are well aware that they are lying – they are just locking up innocent Indonesia fishermen for not people smuggling.

Yet the court transcripts that state “this is not people smuggling” have been available at sievx.com since 2002.

IV. Final provisions
Article 19
Saving clause
1. Nothing in this Protocol shall affect the other rights,
obligations and responsibilities of States and individuals under international
law, including international humanitarian law and international human
rights law and, in particular, where applicable, the 1951 Convention and the
1967 Protocol relating to the Status of Refugees and the principle of nonrefoulement
as contained therein.
2. The measures set forth in this Protocol shall be interpreted and
applied in a way that is not discriminatory to persons on the ground that
they are the object of conduct set forth in article 6 of this Protocol. The
interpretation and application of those measures shall be consistent with
internationally recognized principles of non-discrimination.
UNHCR Summary Position on the Protocol Against the Smuggling of Migrants by Land, Sea and Air and the Protocol to Prevent, Suppress and Punish Trafficking in Persons, Especially Women and Children, Supplementing the UN Convention Against Transnational Organized Crime
1. UNHCR has followed with interest the recent adoption of the UN Convention against Transnational Organized Crime, including the Protocol against the Smuggling of Migrants by Land, Sea and Air (“Protocol against Smuggling”) and the Protocol to Prevent, Suppress and Punish Trafficking in Persons, Especially Women and Children (“Protocol against Trafficking”). The Office is pleased to be present at the High-Level Political Signing Conference held in Palermo, Sicily, from 12 to 15 December 2000.
2. UNHCR shares the concerns raised by many States that criminal and organized smuggling of migrants, on a large scale, may lead to the misuse of national asylum or immigration procedures. However, given an increasing number of obstacles to access safety, asylum-seekers are often compelled to resort to smugglers. UNHCR is also aware of cases of trafficked persons, particularly women and children, who may, under exceptional circumstances, be in need of international protection. The Office therefore participated in the preparatory work of the Ad Hoc Committee in Vienna, supporting its efforts to elaborate international instruments which would enable governments to combat smuggling and trafficking of persons, whilst upholding their international protection responsibilities towards refugees.
3. The Protocol against Smuggling, for instance, contains a number of provisions which may impact on smuggled asylum-seekers. The authorization to intercept vessels on the high seas, the obligation to strengthen border controls and to adopt sanctions for commercial carriers, or the commitment to accept the return of smuggled migrants may indeed affect those who seek international protection. A number of comparable provisions of the Protocol against Trafficking may have a similar effect.
4. During the sessions of the Ad-Hoc Committee, UNHCR therefore emphasized the need to reconcile measures to combat the smuggling of migrants and the trafficking of persons with existing obligations under international refugee law. The Office welcomes the adoption of a saving clause in both Protocols, designed to safeguard the rights of asylum-seekers and refugees under the 1951 Convention and the 1967 Protocol relating to the Status of Refugees, in particular in relation to the principle of non-refoulement.
5. In addition, UNHCR appreciates the adoption of provisions for the protection of smuggled migrants, such as the obligation of States Parties to take appropriate measures to afford smuggled migrants protection against violence and to take into account the special needs of women and children. The Protocol against Smuggling is also clear in that it does not aim at punishing persons for the mere fact of having been smuggled or at penalizing organizations which assist such persons for purely humanitarian reasons. Indonesian fishermen do not deserve to be charged or jailed.
6. In conclusion, UNHCR hopes that States Parties will respect the international legal framework set out by both Protocols through the adoption of similar safeguards in all bilateral or regional agreements or operational arrangements implementing or enhancing the provisions of these Protocols.

The legal and constitutional committee had this pointed out to them by 27 different legal experts in a committee against “people smuggling” this year, they ignored all of it.

Then they rendered poor Hadi Ahmadi to Australia because he translated in Indonesia way back in 2001.

And our ignorant court system found him guilty while the jury were told to ignore treaties and the trifling fact that the refugee convention is part of domestic law.

In reality there are no people smugglers because no-one has to be smuggled, it is their right in law to cross borders and come here.

Yet another indication of the brutal treatment of asylum seekers housed in Indonesian detention centres.

On a related note, there was a remarkable story in The Age/SMH today about a Sri Lankan family caught in Australia’s ‘Kafkaesque’ detention system.

In Human Rights Overboard: Seeking Asylum in Australia, Julian Burnside QC writes: “In 2004, the High Court accepted the government’s argument that it could hold a stateless Palestinian man in detention for the rest of his life.”

Could such a fate befall the Rahavans?

Refugees – the asylum seekers fully adjudicated against UNHCR criteria in Indonesia -have grown in number over the years, hoping that Australia will select them for resettlement and enduring the further suffering which comes with waiting in a country with a poor human rights record and which is not bound by the UN Refugees Convention.

They have registered with UNHCR Jakarta , after a dangerous escape journey thinking this is the right way to seek asylum, to register and get assessed. There was no queue to join at home or closer to home. And they wait and wait. The facts are that Australia has resettled an average of 80 such genuine refugees per year in the past five years. Any wonder that the numbers are growing into the thousands and the “burden ” on our neighbour becomes such that conditions for asylum seekers and refugees deteriorate into that dark pit of horrendous human rights abuse?
And we the taxpayers foot the bill for a large percentage of the UNHCR operation, the jails, the fast boats, the detention centres and God knows what else.

But Fred, the Indonesians are only responsible for the slaughtere of 183,000 Timorese while we watched, the actual ongoing genocide in West Papua while we find ways to make the refugees stay home and die, they are torturing them and filming it for god’s sake.

We have this lovely system going here.

We use the excuse of our voluntary resettlement program to beat up and abuse asylum seekers who arrive by sea via Indonesia – and let’s be clear here. – they are from Afghanistan (only 1:300 have been rejected), Iran, Iraq, Kuwait, Palestine, Pakistan, Yemen and other places where we have no embassies and they cannot apply anyway – even though they have a legal right to come here.

We import Afghans from Washington, London, Paris, Berlin and other rich nations and ignore those we have jailed in Indonesia and Malaysia.

QON’s on the estimates website shows the perfidy of this system.

Anyway we use the voluntary program to try and deny the rights of the very people covered by the refugee convention yet when it comes to those in Indonesia or Malaysia we claim that resettlement is not a right and let them rot.

QUESTION TAKEN ON NOTICE
BUDGET ESTIMATES HEARING: 26 MAY 2010
IMMIGRATION AND CITIZENSHIP PORTFOLIO
(38) Program: Internal Product
Senator Humphries (L&C 74) asked:
Can you tell me how many Afghans Australia has issued visas to in 2009-10 to date
and from which overseas posts?
Answer:
In the 2009-10 program year to date (31 May), a total of 1,549 visas were granted to
Afghan nationals.
The overseas network granted 1,155 of these visas across 19 posts with the
remainder processed onshore.
Amman 3
Auckland 12
Bangkok 1
Beirut 1
Berlin 37
Dili 1
Dubai 851
Islamabad 141
Jakarta 2
Kuala Lumpur 3
London 11
New Delhi 8
Ottawa 6
Paris 1
Phnom Penh 3
Seoul 14
Shanghai 1
Tehran 42
Washington 17
Total 1,155

So we granted visas for exactly 1,155 of the 2.9 million Afghan refugees yet we torture the few who arrive here and we take more from Washington than from Jakarta or KL.

So much for “regional”.

These categories go beyond our international obligations and have been introduced to enhance our assistance to those in need.