Shamed by the Chinese?

As Australia continues to dither about dealing with CO2 emissions, there are reports that China is preparing to take action by introducing a cap-and-trade system.

Shamed by the Chinese? As Australia continues to dither about dealing with CO2 emissions, there are reports that China is preparing to take action by introducing a cap-and-trade system. Zhang Junkuo, head of development strategy at the State Council’s development research center, told reporters in Beijing yesterday that government may set emissions quotas for large enterprises and a certain portion of them may be traded. The cap-and-trade study is still in the early stages and is being considered among other options including a carbon tax, Zhang said.

Recession? Cutting 100,000 jobs a year? You’ve never had it so good. The Lord Young of Graffham was a most successful property developer in his years before entering politics, where he served Margaret Thatcher both as an adviser and a minister before retiring as Deputy Chairman of the Conservative Party on her resignation as Prime Minister.

But you cannot keep a good economic dry down and the latest Conservative Prime Minister, David Cameron has resurrected the influence of this former member of the Management Board of the Centre for Policy Studies — the think tank Mrs Thatcher founded to put a bit of toughness into her party’s policy making. Earlier this year Lord Young completed a review of health and safety laws for the government finding that businesses now operate their health and safety policies in a climate of fear because sensible rules that apply to hazardous occupations have been applied across all occupations.

According to the Wikipedia summary, the excessive “enthusiasm with which often unqualified health and safety consultants have tried to eliminate all risk rather than apply the test in the Act of a ‘reasonably practicable’ approach.”

Now in a more general advisory role to Prime Minister Cameron, Lord Young yesterday gave the London Daily Telegraph the benefit of his views on the state of Britain and declared that the vast majority of Britons have “never had it so good” because of the low interest rates during the recession. As to the loss of about 100,000 public-sector jobs a year, well that was described as being within “the margin of error” in the context of the 30 million-strong job market as a whole.

He told The Daily Telegraph from his office in Downing Street:

“For the vast majority of people in the country today they have never had it so good ever since this recession — this so-called recession — started, because anybody, most people with a mortgage who were paying a lot of money each month, suddenly started paying very little each month. That could make three, four, five, six hundred pounds a month difference, free of tax. That is why the retail sales have kept very good all the way through.”

The views of the 2.45 million unemployed (7.7% of the workforce) were not asked to comment.

Picking on the foreigners. Xenophobia is taking a new form in the Netherlands. The country’s Justice Minister Ivo Opstelten said yesterday that in the future, only residents of Dutch cities will be allowed to purchase cannabis. “Not tourists. We don’t like that,” he said on state television in remarks broadcast on Wednesday. The Opstelten proposal marks another step back from the liberal policies of Dutch tradition.

The Minister’s spokesman The London Telegraph reported Wim van der Weegen saying Mr Opstelten intended to “give a political signal.” Details of the plan are still being worked out and it will be presented to parliament sometime next year. “This Cabinet wants to bring marijuana cafés back to what they were once intended to be: for people who live in the immediate area, not large-scale criminal trade and not tourism,” he said.

Safe as a bank. If you are wondering why the European Union and the International Monetary Fund are pushing billions of aid so a reluctant Irish Government has the necessary funds to help out its country’s banks if — or probably that should be when — they run into further trouble, have a read of the views of Morgan Kelly, Professor of Economics at University College Dublin.

Earlier this month in the Irish Times he outlined how the government bill to bail out the banks will reach 70 billion euro, a figure that dwarfs the 15 billion euro in spending cuts now agonised over, and reduces the necessary cuts in government spending to an exercise in futility. He wrote:

What is the point of rearranging the spending deckchairs, when the iceberg of bank losses is going to sink us anyway?

What is driving our bond yields to record levels is not the Government deficit, but the bank bailout. Without the banks, our national debt could be stabilised in four years at a level not much worse than where France, with its triple A rating in the bond markets, is now. 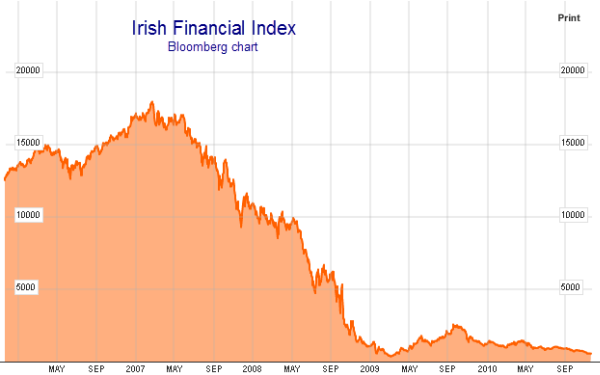 But if things are as grim as Professor Kelly paints them, why are the European Central Bank and the IMF throwing good money after bad? As best I can work out they are just hoping that something will turn up because the prospect of collapse is too horrible to contemplate as it is the solvency of the German and French banks, which will suffer if the Irish go under, that concerns them most.

The front page headline in the International Herald Tribune suggests that the contagion is spreading: Government, media rewrite history to attack Labor for being too soft — or is it too hard — on China

So the four biggest Irish banks are broke. Tough luck for those who loaned them all that credit.

Why that debt would suddenly and totally become owed by the Irish public, instead of the banks and only the banks, I have no idea.

What’s wrong with simply stepping to one side and watching the hulk settle?

The government may well choose to stand by the deposits of their countryfolk… OK, how much will that cost?

As for property loans and so forth, the Government may offer to do a Fanny Mae and take these loans over… or not. Why get too excited?

Is there some immutable law of the universe that dictates that banks are a special breed of institution, immortal and above all earthly cares?

Come on, economists and journalists, justify your starting position, which appears to be that all banks are sacred.

I know this is a simplistic question but…after the GFC, all this debt is now owed all over the world (except for Australia, thank you Kevin, Swanny, Labor and Treasury), so can anyone tell me, who exactly ended up with all the money?

JohnB – re the Irish gov taking on the debts of Anglo Irish, it is generally accepted here that, on the day they actually failed, St Patricks (ya couldn’t/wouldn/’t make it up)most of the Cabinet was at a knees-up with the AI board, The Taoiseach (PM) Cowen, commonly known as Biffo, realised that if it went down the directors would sing like the proverbial canaries when being examined by bankruptcy proceedings and the complicity of the aforesaid Cabinet and the entire corrupt (usually no big deal but they are also wildly incompetent) maaates would have their collars felt, by Inspector O’Knacker so everything, every rotten, speculative, jerry built shopping centre, skyscrapper and ghost gated community and housing estate throughout the land is now owned by NAMA at FACE VALUE, thanks to the blanket guarantee.
Krudd only guaranteed private deposits – commercial loans required a fee.