We’re a winner as second-worst

The global risk advisory firm Maplecroft has ranked Australia second among six countries it ranks as "extreme risk" on the basis of their high CO2 emissions from energy use.

Australia among the winners — the world’s second worst CO2 polluter. The global risk advisory firm Maplecroft has ranked Australia second among six countries it ranks as “extreme risk” on the basis of their high CO2 emissions from energy use. 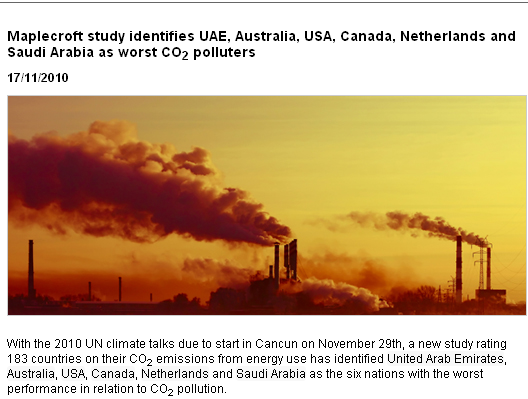 The firm’s CO2 Emissions from Energy Use Index (CEEI) is produced “to raise awareness and help companies identify their risk exposures. It also helps to identify those countries which may be subject to future regulation of CO2 emissions or pressure from public interest groups to address emissions”. Don’t cry for Gary. Poor little Gary Gray. When he left a senior executive position at Woodside Petroleum to enter Parliament in 2007, his pay was cut from $675,000 a year to about $130,000. What a sacrifice he made to enter political life.

But hang on a minute. That $675,000 he enjoyed during the years at Woodside. Didn’t he get that as a result of his prior political life? Wasn’t the only reason he qualified for the big bucks because as a former federal secretary of the ALP he was thought capable of opening a few doors and solving a few problems with governments?

Hopefully, he was able to put a few dollars way to tide him over for the times when the pay was cut to a dismal $130,000 but I wonder what the workers think about his lament that politicians are underpaid? The Australian Bureau of Statistics told us this morning that full-time adult ordinary-time earnings in August reached $1257.20 a week — about half Gary’s starting salary three years ago before taking into account the lurks and perks that politicians qualify for on top.

I doubt that the workers will be crying for the Special Minister of State but I reckon there would be many who would be very happy to swap places.

Having fun in Nairobi. I hope Ms Gita Kamath was able to make it down to Nairobi for this week’s vital meeting of a UNESCO Intergovernmental Committee considering the important task of recognising worthy additions to the world’s representative list of the Intangible Cultural Heritage.

I am sure that the contribution of our permanent delegate to UNESCO to this task would have made it worthwhile leaving Paris for a few days to have a say on whether the gastronomic meal of the French really should have qualified for the list.

What I am not so sure about is whether Kamath would have been as qualified to make a decision on Turkey’s Kırkpınar oil wrestling festival but being a good diplomat I’m sure she took expert advice.

(You will find more on this important work of UNESCO on Crikey’s The Stump.)

Starting to get serious. This Sarah Palin for President business is starting to get serious. The former Alaskan Governor has expanded from just appearing on her Fox News spiritual home and given a lengthy interview to ABC News’ Barbara Walters that will air early in December as part of Walters’ “10 Most Fascinating People” of 2010. ABC ran a short extract from the interview overnight: In the extract Sarah Palin says she is seriously considering a run for the White House, and she believes she could beat President Obama in 2012.

“I’m looking at the lay of the land now, and … trying to figure that out, if it’s a good thing for the country, for the discourse, for my family, if it’s a good thing,” Palin said in an interview scheduled to air in full Dec. 9 on ABC as part of Walters’ “10 Most Fascinating People” of 2010.

Asked Walters: “If you ran for president, could you beat Barack Obama?”

“I believe so,” Palin said.

The heat’s too hot. Not before dinner, thank you. Beyonce’s first television advertisement for her new fragrance Heat has been ruled unsuitable for children. I’m intrigued to find out what Crikey readers’ standards are. A prudent or prudish decision by the British watchdog?

Guardian Australia has turned a profit for the first time since its 2013 launch.

The only band that matters isn’t a band anymore

Kendrick Lamar's Pulitzer win seemed surprising to many. But, when you think about the state of popular music, it makes total sense.

Young women no longer see feminism as a social justice movement of value -- and who can blame them?

How about we just ignore all advertising? Restructure how we do things? Given that won’t happen, the ad is no better nor worse than any other fragrance ad. If it’s that awful, put it on after 9:30pm.

Another “Palin-drone”?
How would the rest of the Tea Party and “Rupublicans”, with their professed morality, view a candidate looking to “The Lay of The Land” (whoever she is) for “a sign”?
Unless she can see “Mary Magdalene” too, from Alaska?

Zut – because that would be crass.

Regarding the first topic and our disgusting 2nd place, 350 are trying to organise art which can be seen from space to broadcast to the conference at Cancun. Thom Yorke of Radiohead has joined in with this quote: “Our Leaders and much of the lobby groups for oil and energy companies are arriving in Cancun at the end of the month, still under the illusion that we can carry on burning energy to feed a global financial model that now no longer represents the needs of the rest of us and the dire situation we face.They are still labouring under the assumption that they can turn the tide of mother nature. The future of the planet and all living creatures is secondary to their own system of belief. They hide behind meaningless procedure. False science and smear campaigns are paid for and quoted to undermine the overwhelming evidence of global warming. Enough of this shit. There is no more time.”
Couldn’t have put it better myself. Somehow I think if Palin becomes prez we’ll be more doomed than we already are….. 🙁