Victorian electioneering gets the coverage

I’m finding it hard to understand all the angst in the Labor Party over the gay marriage issue.

Call me young-fashioned, but I’m finding it hard to understand all the angst in the Labor Party over the gay marriage issue. It’s clearly not an issue that’s up there with interest rates, health or education in terms of bringing swinging voters down on side or the other (pardon the pathetic pun).

It’s also something where the Labor Party can clearly differentiate themselves from the Liberals at a time when everyone’s calling them Tweedledumber, it’s something the clear majority of people have no problem with and (clearly the least important issue to those at the top…) it’s something that most members of the ALP support.

Kevin Rudd up another spot as various people bring out various books pushing their own version of recent history and some in the Press Gallery fall in line with the Sussex Street fantasy the election result was solely determined by the second week leaks.

Talk about not seeing the forest for the trees. Meanwhile Tony Abbott sneaks ahead of his shadow treasurer for the first time in three weeks. 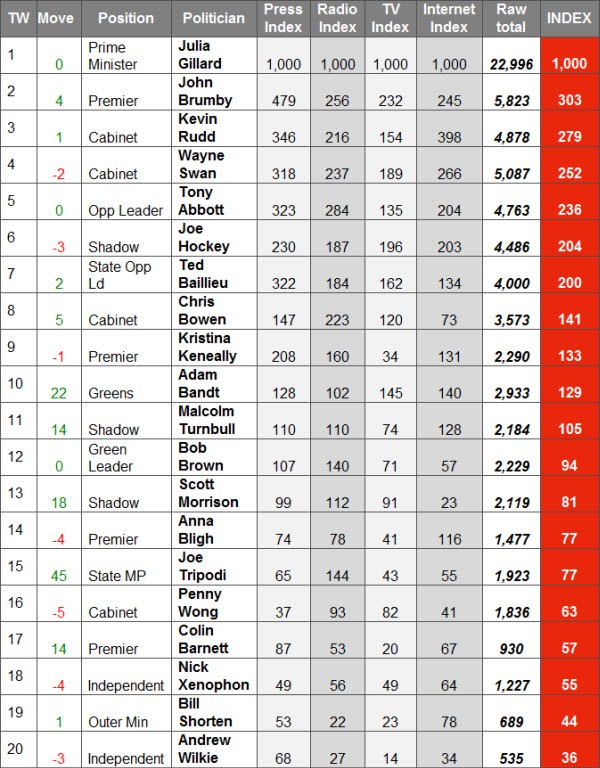 Low volumes again this week for the politicians on talkback. It seems the banks are taking most of the heat directly.

More than a small amount of pressure on the man holding the most important position in Australia on the eve of the Ashes. Good luck punter, and let’s hope you don’t need it.

Re Gay marriage and Labor. You need to understand that it doesn’t matter what Labor members think, what does matter is what the right wing powerbrokers think. It is the SDA and Joe De Bruyn and the AWU and Bill Ludwig who decide these matters. The nexus between the ALP right and the catholic church are the reason for the policy, nothing else.