Crikey media wrap: The biggest story in the world right now? A royal engagement. We waded through the British media as they froth at the mouth so you don't have to.

Contain yourselves. The biggest story in the world right now? Do we even need to say it? Finally Waity Katie, also known as Kate Middleton, is engaged to heir-to-throne William Windsor and we offer our heartiest Crikey congratulations. He is the balding one if you can’t tell your princes apart.

If ever there was a time for Fleet Street to shine, this is it. The UK tabloids are in royal-watcher heaven, analysing (and over-analysing) all the minute details of the engagement, wedding and future king and queen. We’ve waded through the dross so you don’t have to. You can thank us later.

For starters, watch the post-engagement announcement interview with Will and Kate, where they talk about how they got engaged and their hopes for the future.

Which reminds us of that other post-engagement interview.

Dad Charles stuck his foot in it slightly, as always, saying “They have been practising long enough”. Step-mum Camilla Parker Bowles gave a lovely plug to the musical she just watched: “As she left the Apollo Victoria where she met the cast of the stage show Wicked, Camilla said: ‘It’s the most brilliant news. I’m just so happy and so are they. It’s wicked.”

PM David Cameron — who apparently slept out on the street in anticipation of the Chuck and Di nuptials — got into a right royal fit, says the London Evening Standard:

The Prime Minister was passed a note revealing the engagement while he was chairing this morning’s weekly Cabinet meeting. He immediately announced it to his ministers, who banged the table noisily to show their delight.

If you’re wondering, Kate is expected to become Queen Catherine, while Will shall be bestowed with a Dukedom.

“With this, my mother’s ring, I will thee wed” declares the Daily Mail website, because if you haven’t already heard, Will proposed with Diana’s famous sapphire and diamond ring. 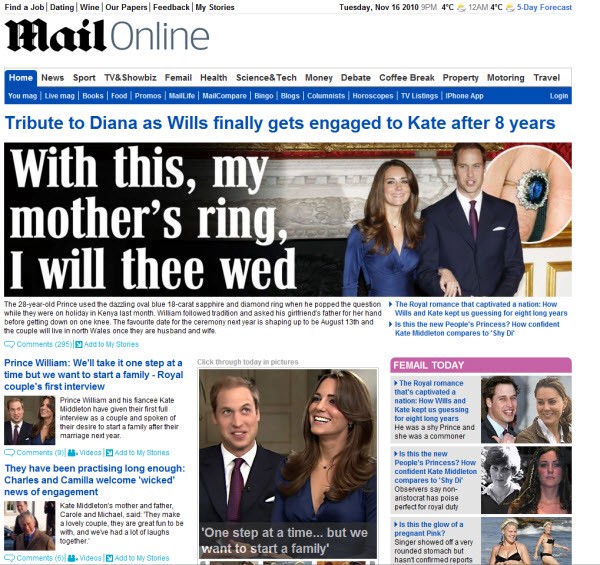 You’ll be struggling to find a non-Wills and Kate Daily Mail story today, with all angles covered from “Prince William: We’ll take it one step at a time but we want to start a family – Royal couple’s first interview“, “They have been practising long enough: Charles and Camilla welcome ‘wicked’ news of engagement“, “The biggest royal wedding since Charles and Diana: How Kate and Wills will bring the world to a standstill” plus meatier stories of “Prince William and Kate Middleton will live an ultra-modern – and ultra green – royal fairytale” and “Is this the new People’s Princess? How confident Kate Middleton compares to ‘Shy Di'”.

Plus, the big one: “The dress that will inspire a thousand imitations: What Kate’s wedding dress will look like” (for those who are wondering, experts expect traditional with a modern edge in lace).

The Daily Mail isn’t alone in fretting about the frock. The Washington Post joins in the fashion fun: “It seems almost certain that Middleton will choose a British designer for this historic dress,” while an article in The Guardian expects it to be “classic, demure”.

Celebrities are joining in on the hi-jinks, offering up what wedding gifts they would give the happy couple. Stephen Fry suggested “spelt muesli” while Mark Wahlberg went with the classic “congratulatory marijuana”.

The Guardian is also running a very comprehensive live-blog, with highlights including:

11.55am: Reams of pre-written copy is spewing out of PA, such as this

He reportedly calls her “Babykins”, while he is apparently her “Big Willie”.

1.24pm: Hold the front page, Majesty magazine has been forced into a hasty redesign of its latest issue, according to Helen Pidd.

Majesty, which “gives its readers a colourful insight into the privileged lives of the royal families of the world”, has had to make an eleventh hour change to its December edition. The Queen was due to be the festive cover girl, but has been bumped for a shot of the happy couple, managing editor Joe Little told me.

But while much of the live-blog is tongue-in-cheek, The Guardian also has royalists among its writers, from the article about how Will became so well-adjusted to an in depth profile of the commoner Queen-to-be. Republicans should at least find a way to enjoy the whole affair — since they are footing the bill, notes Michael White.

Politics.co.uk declares the GFC-depressed country in need of a good party:

It’s been nearly three decades since the last big-budget, no-expense-spared outpouring of national delight. The circumstances are strikingly similar: tricky economic times, serious levels of unrest brewing at home. The nation needed cheering up then. It does now, too.

Slate also offers up a wonderful Explainer for all those difficult royal questions who don’t dare to ask, including “If the queen really didn’t like Kate Middleton, could she stop the wedding?”

It’s not just the international media jumping — all the colony’s papers are leading with the engagement on their websites. The Australian is running a photo gallery of Kate and Will throughout their relationship (lots of tweed and hats) as well as a story of how Kate won Will’s heart, while AP put together a handy timeline from when they first met in September 2001, currently up on PerthNow.

Blogger Mia Freedman from Mamamia pens her thoughts on the engagement:

The fact William gave Kate his mother’s engagement ring? Torn about this one. In a way it’s romantic and beautiful and closes a circle and connects him with his mum. But it’s hardly a happy symbol of love and good times. Bad omen?

The Australian Republic Movement quickly released a press release, noting it was a “quintessential British moment” but chair Mike Keating added, “On a human level, it is certainly an announcement worthy of our congratulations — but so is the happy engagement of all young couples on the verge of the next big stage of their lives.”

As for purchasing a special something to mark this happy day, if you’re too impatient to wait for the Franklin Mint collection, check out Gawker’s round-up of commemorative souvenirs.

Why stop at paying back the reno? Here are a few more bills for the Sussexes

What a snide, snarky little rant from Amber. What’s the matter dear, disappointed that it wasn’t you? Get over it – you’re still a princess in daddy’s eyes.

Of course, given that this is Crikey, if Prince William had announced that he was getting engaged to Daniel Radcliffe, it would have been unalloyed, unironic cheers.

You’re pathetic. Just be happy that two people found each other to love.

@peter Phelps
What’s to be happy about? The British Royal Family, which makes the Russian oligarchs look like charity workers, is about to be perpetuated.

Anything less than a respectful regurgitation of a press release just won’t do.

Peter, yes I am terribly disappointed that it wasn’t me.

David Flint is disappointed it wasn’t him, too.