Continuing on with our look at election coverage, this week we'll start looking at opinion columnists, writes Jason Wilson, lecturer in journalism at the University of Canberra.

Continuing on with our look at election coverage, this week we’ll start looking at opinion columnists.

This will show how the techniques we’re using allow us to begin talking about the specific issue agendas that particular news outlets, writers and political actors promote.

There’s a pretty stark example available in the shape of Herald-Sun columnist Andrew Bolt’s work during the election. His work is badged as opinion, so we wouldn’t of course expect him to be offering fair and unbiased coverage. But the technology lets us see precisely which associations he’s creating, and the issues he’s trying to promote.

When we run his column between the 24th of June and the 21st of August through Leximancer we get something like this: 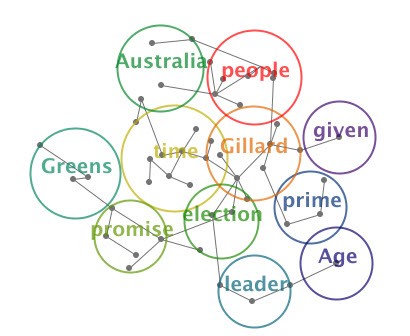 Big, warm themes here include “Gillard” and “people” — they’re the most relevant themes covered in his column. “People” sounds like a nice cuddly thing to be talking about, but if we dial up the visibility of subsidiary concepts, we get a better idea of the “people” Bolt is discussing — the kind who come in boats. (Boat people is the preferred terminology, naturally, rather than “refugees” or “asylum seekers”). If we zoom back and look at the closest associations for the concept, “Gillard”, we get a pretty good idea of the way the Prime Minister was being talked about in Bolt’s column — over on the right there you’ll see a list of names including “Rudd, Labor, Government, Abbott, Age…”, then below, the words she’s associated with. The compound concept “boat people” is the strongest association. Gillard was mentioned 16 times in association with boat people during the period in question in Bolt’s column. This was a closer association than any other “word” concept — Bolt hammered the issue of the East Timor detention centre. A lot of it came in one excoriating column, but it crops up throughout the length of the campaign.

There’s also a strong association between “Gillard” and “Rudd”. They’re mentioned together eleven times, and these are all either by way of comparison, or mentioning that she deposed Rudd. The comparison is only favourable once, where he allows that Gillard has a stronger “sense of mission” than Rudd early on. But this soon sours — she’s either just as bad, or beholden to the factional warlords who helped depose Rudd for most of the rest of the mentions.

In any case, we can see that the issue of asylum seekers was far more prominent in Bolt’s coverage than it was in the Queensland newspapers we looked at the other week, where it barely figured. Along with the Prime Minister’s failings, this was the issue he thought the most important in the election campaign.

*There’s a lot of media out there. How to keep up with the messages our politicians, papers and pundits are trying to sell us? Every fortnight Jason Wilson will feed another dimension of media coverage through a tool called Leximancer, which automates a lot of the hard graft of content analysis. Unlike word maps such as Wordle, Leximancer doesn’t just count the frequency of words, it derives themes and concepts from large chunks of text, showing their prevalence, their importance, and the relationships between them. The pretty pictures are great, but they also serve as a way into interpretative analysis…

Paul Barry and Matthew Knott look back at the main players in the Night of the Long Knives: where are they now?

The latest Essential Research is in, with one particular graph showing when voters decided who they were voting for in last year's election, reports William Bowe.

The Bracks-Faulkner-Carr post-election review into the current state of the Labor Party will recommend radical revamps to the party's rapidly congealing internal structure, including multiple direct election proposals to belatedly re-energise the grassroots.

Do you reckon ABC’s “Insiders” would become more relevant, and rate better, if it wasn’t used to show-case the “talents” of Andrew Blot and such? If it could attract a few real journo’s and not “hacks with sacks” to give us their opinions on what was “happening”?

Any chance of a comparison of Bolt’s whinging under Labor and a similar timeframe during the Howard/Costello regime? I suspect the associations may be different…

As my original entry was deleted by the moderator, obviously because one shoudn’t be too nasty and hurt dear Mr Bolts feelings here on Crikey. Suffice to say Bolt continues to lie and twist figures to suit his point of view. He continues to use the term boat people, rather than the ‘LEGAL” term Asylum Seekers, to denigrate these people even more. He is a disgrace and a cancerous growth invading decent journalism.

How about running Crikey through the Leximancer ?