Forget dating, the act of simply talking to the opposite sex has become a commercial enterprise and, if last Saturday's Sydney Morning Herald is any guide, business is booming, thank you very much. Plus, other media news of the day.

Pick up more than a copy of the SMH. Forget dating, the act of simply talking to the opposite s-x has become a commercial enterprise and, if last Saturday’s Sydney Morning Herald is any guide, business is booming, thank you very much. Take SMH journalist Rachel Olding’s page three yarn about male pick-up artists — otherwise known as “PUAs” — teaching other men how to roam Sydney’s bars and charm women:

“I am standing at the Ivy sipping lemon, lime and bitters when I become aware of an entire species of male I’d never encountered.”

It’s probably no surprise that Olding cites the Ivy as a bit of a pick-up joint — the multilevel bar has a reputation for being a shrine to singledom — but was it worth mentioning the venue three times?

Well yes it was actually, when you consider Fairfax-owned dating site RSVP was running a “Summer Sessions Singles Party” at the Ivy the following day. 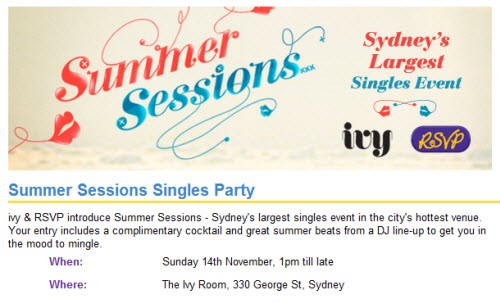 For just $20, single punters receive a complimentary cocktail and “just maybe Mr or Mrs Right”. No word on whether a copy of the newspaper of the year was thrown in gratis as well. — Tom Cowie

Epic fail at the Tele. The Daily Telegraph online is channeling its inner Gen-Y this morning, with the extract of a story about Nazis contained the words “epic fail”. Confused? According to Urban Dictionary, the source for all things internet speak, an epic fail is “when something can be seen to be a total failure”. Seems appropriate. “Facebook launched a real messaging service today, replacing its clunky messaging system with something that foments a direct, head-to-head battle with Google for dominance of the internet. The new Facebook system consists of three fundamental innovations: It unifies instant messages, SMS texts, and email into one in box.” — Daily Beast

An app a day keeps the printers away

“Sales of newspaper apps for devices like the Apple iPad are cannibalizing sales of physical newspapers, James Murdoch, head of News Corp’s operations in Europe and Asia, said on Friday.” — Reuters

“Apple Inc. is preparing to announce that its iTunes Store will soon start carrying music by the Beatles, according to people familiar with the situation, a move that would fill in a glaring gap in the collection of the world’s largest music retailer.” — Wall Street Journal

“New social network Path launches today, and it limits you to your nearest and dearest 50 friends. Path’s limit is in keeping with the work of evolutionary anthropologist Robin Dunbar, who famously theorized that you can only maintain close relationships with 150 people — and of those, you probably only trust 50 of them.” — Newser

“BBC Worldwide has sold its 50% share in its global TV channels joint venture with Discovery for $156m (£97.1m). Today’s sale comes nearly a year after a BBC Trust review said the corporation’s commercial arm should sell its non-BBC branded international channels such as Animal Planet, one of two jointly owned Discovery channels along with Latin American entertainment channel Liv.” — The Guardian

“In an unprecedented giveaway, VB has pledged to ‘Shout the Nation’ if the Aussies win the series. Every adult will be eligible to receive a free 375ml can or stubby with complimentary tokens to be found in the Herald Sun. As a major sponsor of the team, VB is hoping the entire nation will toast victory if Australia wins the series.” — Herald Sun

ROTFL. Sorry Rupert. Not even for the (vague) chance of a free beer, will I buy a copy of the Herald Scum. 😀