Cuba, on the hunt for Hemingway

Grounded by a hurricane in Habana, Cuba, we fuel up on mojitos and go in search of Ernest Hemingway and his own slice of history.

Hurricane Paula was somewhere between the Yucatan Peninsula and the Cuban state of Pinar del Rio, which is another way of saying in the middle of my flight path, which is why my plane to Cancún was grounded and I was forced to spend three more days in Havana.

It was strange to be driving back into the city, past the faded murals entreating me to defend the Revolution and honour the memories of Camilo and Che, at once thrilling and kind of worrying. On the one hand, I hadn’t wanted to leave: Havana had won me over very quickly, and there were a few things I hadn’t been able to do that I’d now maybe have a chance to. On the other, I probably wouldn’t have a chance to, as the reason I had not been able to do those things in the first place was a lack of adequate funds. As the taxi rounded the Plaza de la Revolución, I still had no idea how I was going pay for three more nights of accommodation, food and mojitos. On Wednesday morning, the morning of my flight, I’d had just enough money to get to the airport and to pay the steep departure tax. Now I was spending the latter sum on my cab ride back into the city. By the time I arrived at the door of Casa Miriam in Havana Centro, I was completely broke.

My first stop after the pension, where my hosts agreed to set up a rolling tab until some money could be sent from home, was El Floridita Restaurant and Bar. El Floridita was one of Hemingway’s haunts and, while it is unlikely he would make much of it now, with tourists comprising the vast majority of the clientele, its walls remain plastered with photographs to prove his many years of patronage. (There are also a couple that prove he was good friends with Fidel Castro, whose overthrow of the Batista regime Hemingway told The New York Times he was delighted with.) I had met the head bartender, Abel, on my second night in the city and we had become fast friends over conversations about Cuban politics and the World Baseball Championship. We also discussed the bar’s famous regular, whose work I was surprised to hear he’d never read. “Not even The Old Man and the Sea?” I had asked.  “I have been told a lot about it,” he replied. “I know, for example, that it is about the human condition.”

“I have a copy with me,” I had said. “I finished it yesterday afternoon on my balcony. I can bring it in for you if you’d like.”

He shook his head. “I can read English but don’t always understand it. And I cannot find a copy in Spanish.”

A few days later, I found a copy of El Viejo y el Mar at a stall on the Plaza de Armas, not far from the Hotel Ambos Mundos, where, in Room 511, Hemingway finished Death in the Afternoon and Green Hills of Africa. It was an Argentinean edition, published in 2003 to mark the 50th anniversary of its original publication, and was well-hidden among the various second-hand copies of Che’s famous diaries and the collected works of José Martí. (Later that day I found a copy of the first Cuban edition of El Viejo y el Mar, but it cost twenty convertible pesos, which struck me as a ludicrous amount given its relatively scrappy condition. In any case, by that stage I’d already purchased the other, cheaper edition.)

I had gone back to El Floridita three days in a row, but was told each time that Abel would not be in until mañana, tomorrow. Eventually mañana meant Wednesday, which was the day I had originally been scheduled to leave. I asked my cab driver to make a detour to the bar on the morning of my flight, but it was closed and we continued to the airport, the book still in my bag. When Hurricane Paula grounded my flight, it seemed like a good excuse to make another visit to the bar, and when I presented Abel with the book he was so pleased he plied me with three free daiquiris in quick succession. When I visited him one final time, the evening before I was again scheduled to depart, he told me he had started reading the book the previous evening during the storm.  “I have been told so much about this book,” he said. “Pero yo no entendía hasta ahora. The old man in the book is like me.”

El Floridita is the linchpin in Havana’s cottage Hemingway industry: in addition to the aforementioned photographs on its walls, there is also a bronze statue of the bearded, barrel-chested author leaning at the far left-hand side of the bar, which busloads of tourists file in to be photographed with before filing out again without having ordered a drink.

A more impressive, slightly less-visited site is to be found ten kilometres to the east of the city: Hemingway’s house in San Francisco de Paula, Finca Vigía, where he lived from 1939 to 1960 and wrote For Whom the Bell Tolls and The Old Man and the Sea. To my regret, I had not visited the house before my initial departure date, and now that I had been given a second chance I was adamant I would do so before my rescheduled one. “You must go before you leave,” Abel agreed the day I presented him with the book, before adding that he’d never visited it, either. I didn’t tell him that I couldn’t afford to pay the bill at my pension, let alone the cab fare there and back.

On Thursday, Hurricane Paula, by now a mere tropical depression, finally made her way to Havana, the rain coming in off the Caribbean, over the Malecón and into the streets of Havana Centro, in driving, seemingly horizontal sheets. While Abel started reading El Viejo y el Mar, I was holed up in Casa Miriam, reading Fidel Castro’s book of interviews with Ignacio Ramonet, One Hundred Hours with Fidel, and trying unsuccessfully to write. The light in the room had never been very conducive to either of these activities, but with the storm overhead they were almost impossible, the sunroof clouding over grey and my eyes growing ever wearier from squinting.

There were puddles in the street the next morning and money in my bank account. Within moments of the machine spitting out a small flip-book of convertible pesos, I was in a cab tracing the south side of the bay in the direction of San Francisco de Paula. My three-peso ticket stub from Hemingway’s house sits before me on the desk as I write.

Finca Vigía is beautiful and sad, with vintage bullfighting posters and hunting trophies on the walls—with a buffalo’s head looming large above a writing desk and a cheetah’s pelt draped lazily across the couch, a house for animal rights activists it is not—and some nine thousand books precisely as he left them, almost untouched, lining miles of shelves. (Almost untouched, but not completely. Every year, a few items are removed and displayed behind glass in the writer’s old hotel room in town.) The house and its contents are too fragile for people to be allowed inside: visitors instead have to look in through the windows and doors, which are left open, a cool breeze wafting through the spacious rooms and over the half-full liquor bottles that still sit by the armchair. At times it feels as though the writer went out for milk one afternoon and simply neglected to ever come back. His war correspondent’s jacket from Spain still hangs freshly-pressed in the walk-in wardrobe.

If one gets the sense that the house has been forgotten, that’s because, in a way, it has been. The US government’s increasingly controversial economic embargo—in place for more than forty years and widely considered a relic of another era—prohibits American groups from collaborating with the Cuban government to restore the building, open it up to visitors properly, and preserve the thousands of manuscripts and documents that it currently houses. The embargo’s effects are felt elsewhere, too, such as in my aforementioned pension, which was represented online by HostelWorld until recently, when the site was purchased by an American company and had to stop working with its Cuban clients.

“Now we operate through HostelFinders,” my hostess told me one morning. “We’re really hoping they don’t get bought out, too.”

As we made the twenty-minute drive back to Havana Vieja, I struggled to express to my driver the effect that the house had on me. I spent a good ten minutes miming sad clown faces until he finally nodded and said in perfectly good English: “Sad.” I asked him to drop me at the Hotel Sevilla, just off the Paseo de Prado. Having been sufficiently moved by Havana’s Hemingway connection, I still had one literature-themed stop to make.

Havana’s Graham Greene industry is less well-developed than its Hemingway one. There’s a photo of the man in the foyer of the Hotel Sevilla, where Wormwood meets Hawthorne in Our Man in Havana, but that’s about it. (There’s also a photo of Al Capone, who once hired out an entire floor of the hotel.) I sat in the courtyard drinking mojitos and keeping my eye a group of US tourists I had come across earlier at El Floridita.

Perhaps it was the influence of Greene, or perhaps it was that of the Havana Club, but it occurred to me not long after they arrived to give these Americans a bit of a fright. Technically, US citizens like this lot—on holiday, one of them had told me earlier, from Georgia—are not allowed to visit Cuba, though their government is rarely any the wiser seeing as Cuban immigration officials don’t stamp tourists’ passports on their way in and out of the country. I decided to watch them at a distance, staring over the rim of my glass with an intensity belied by the sweetness of its contents. When eye contact was made, recognition was not forthcoming. When the group went to pay, I went to pay, too, and it wasn’t long before they were scurrying into the nearest elevator in an attempt to lose the fellow whose outline was just visible through the leaves of one of the foyer’s pot plants. I ordered another mojito, drank to Greene’s memory, and headed back to my pension fully content with the execution of my ruse. Actually, they probably thought me a pervert.

The next morning, as I sipped on three-year-old rum somewhere above the Yucatan Channel, I started Hemingway’s To Have and Have Not. It is by no means one of the writer’s best books—Hawkes’ film, with a screenplay by William Faulkner, is in many respects superior—but I was reading it to allay withdrawal symptoms and to that extent it was working well. “You know how it is there,” its first sentence began, “early in the morning in Havana …”

Letter from Havana: a Kool new year in Cuba 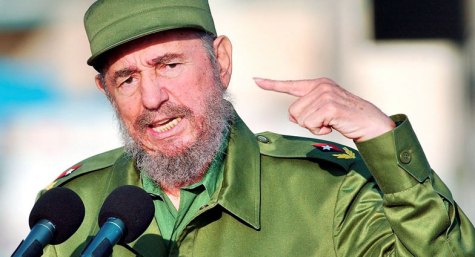 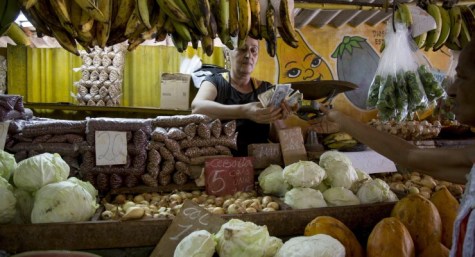 When food is power: how cheap chicken and beans stopped protests in Cuba