The newspaper and magazine sales audits are out and publications are crowing about their success. Or at least those few who have anything to crow about. Also, Ray Hadley's job for life, Rupert's lunch and other tasty media morsels.

Readers ‘vote for The Oz‘ — with no preference allocation. The newspaper and magazine sales audits are out and publications are crowing about their success. Or at least those few who have anything to crow about. The Australian declares “Readers voting for us” — its weekday sales in the three months to the end of September rose a commendable 1.6% given the alarming falls at other papers. 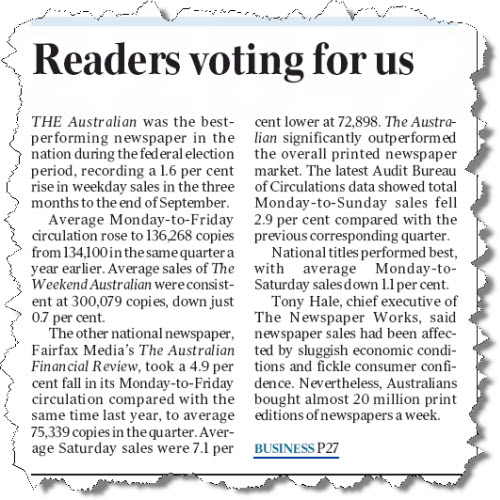 There was good news at ACP Magazine’s Australian Women’s Weekly, too, as editor Helen McCabe trumpeted on Twitter:

But the response elsewhere was unsurprisingly muted as they lick their wounds from a horror survey (Margaret Simons has the spin-free version of events elsewhere in today’s edition). The best Lloyd Whish-Wilson, chief executive of Sydney publishing for Fairfax Media, could offer was that “we are confident we are over the worst for the foreseeable future”. There were 1.8% falls on weekdays and 4.7% on Saturday for The Sydney Morning Herald.

A News Limited press release, meanwhile, declared The Sunday Telegraph had “increased its leadership” with a meager 0.64% rise, while the Saturday Daily Telegraph now sells more than The SMH — when you exclude “bundled, event, education, accommodation and airlines distribution”, that is. — Jason Whittaker

That’s another decade of Hadley, Harbour City listeners — at the very least — pushing the 56-year-old rugby league caller and top-rating talkback shock jock well into retirement age. But that still makes him a spring chicken on the Sydney airwaves: 2GB breakfast lead-in Alan Jones just celebrated 25 years on the air at the ripe old age of 67-69 (Wikipedia isn’t exactly sure; his exact age seems to be a closely-guarded secret), while none other than the golden dentures himself, John Laws, is mounting a comeback at low-rating 2SM in Sydney next February — at 75 years young.

And people say the AM dial is for geriatrics… — Jason Whittaker

Dining with the enemy: Rupert and Media Matters do lunch

“The New York Times has announced that it will begin publishing bestseller lists for fiction and non-fiction e-books early next year.” — TechNewsDaily

Simpsons mark 23 years — no butts about it

“…Fox has renewed The Simpsons for a 23rd season of animated adventures, taking it through its landmark 500th episode (specifically, it takes the show up to episode 515). …Fox has gotten more prudish about cartoon obscenity over the years: For example, they can no longer show Homer’s bare rear end.” — New York Magazine

“According to months of data from leading media-research company Experian Simmons, viewers who vote Republican and identify themselves as conservative are more likely than Democrats to love the biggest hits on TV. Of the top 10 broadcast shows on TV in the spring, nine were ranked more favorably by viewers who identify themselves as Republican.” — The Hollywood Reporter

“Stephen Fry took just minutes to reiterate his offer to pay the fine of Paul Chambers, the 27-year-old man convicted of “menace” following a Twitter joke about blowing up an airport.” — The Guardian

“Europe will run out of capacity for new internet addresses by early next year, potentially cutting the UK off from the rest of the world online, one of the founding fathers of the communications network warned today.” — The Guardian