Latest newspaper circulation figures: not a nice set of numbers

Only a fool would say that circulation figures don’t lie, given all we have learned in recent times. But even so, these numbers tell us the dead tree ship is sinking.

The quarterly newspaper circulation figures are out, and not even the industry association can do much with spin, because they are almost universally bad, with drops Monday to Saturday of around three percent for all titles combined. This follows a previous decline in the June quarter of a similar size.

That’s bad enough by itself, but remember that the circulation figures cover a quarter in which there was an election campaign – which traditionally puts on circulation.

Consider, also, that population is increasing. The combined result tells us that print newspaper reading is a habit for a rapidly declining number of Australians, even when there are things happening that they might want to know about.

And that’s before the impact of the tens of thousands of copies that are dumped on campuses and schools are taken into account – the educational circulation scandal that Crikey has reported on before and which is currently the subject of a review by the Australian Bureau of Circulations.

Here are the circulation figures: 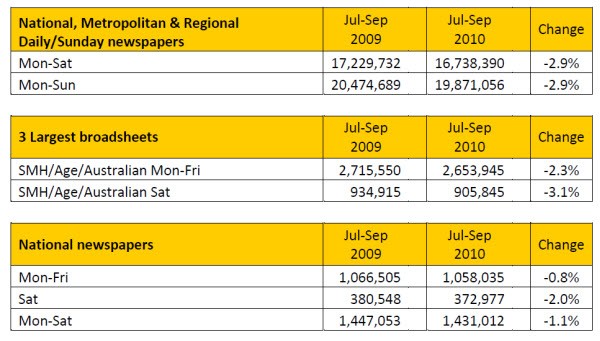 Nor do the Roy Morgan readership figures, also released yesterday, offer any room for comfort. There are more minus signs everywhere.

Look here for readership for the 12 months to September.

The only bright spots are the Monday to Friday sales of The Australian, which effectively held steady, although Roy Morgan would have you believe that readership dropped.

The Age in Melbourne — supposedly Australia’s fastest growing city — has dropped to just 650,000 readers of the weekday edition. Dismal indeed, particularly given the first class investigative journalism that paper has been publishing. Not enough to draw the readers, apparently, which has to raise the question of whether anything would.

The Sydney Morning Herald’s drop is also depressing. There are no ups in the metro dailies, but the city tabloids are not as bad as the broadsheets.

The Daily Telegraph was also a bright spot (someone remind me what the giveaway was to achieve that result) and comparatively so were The Sunday Age and Saturday Australian. The Australian Financial Review is bleeding with a weekday drop of 4.9 percent, and Saturday down 7 per cent.

Quite a few regional newspapers did worse than their city cousins. What gives with the Lismore Northern Star, or the Tweed Heads Daily! And nothing seems to work at The Canberra Times. The bad figures put into context the anticipated moves by both News Limited and Fairfax to move towards delivery on mobile devices. One would have called it visionary if it had happened three years ago. Now it is a matter of necessity, with only the management and the timing at issue. The shift is on, no doubt about it. Nobody will be buying or building new printing presses.

Not that success online is guaranteed. Far from it.

Only a fool would say that circulation figures don’t lie, given all we have learned in recent times. But even so, these numbers tell us the dead tree ship is sinking.

You ask ‘What gives with the … Tweed Heads Daily!’

It has been crap for many years but is still the sole daily paper in the area. It is basically a vehicle for real estate agent boosting (many supposed ‘news’ stories that are complete media releases including prices and contact details) and views of National Party councillors.

But about 2 years ago the free Tweed Echo (a sister to the longer established Byron Echo) came on the scene and provided a very distinct left/green approach and good journalism to boot. It is only weekly but, being free and having good distribution and a very thankful readership, it is now seen as the best source of actual news in the Tweed.

A couple of major environmental issues – holding a leg of the World Rally Car Championship through sensitive environmental reserves, and Council plans to push ahead with a dam in the most biodiverse valley in the Tweed – that the Echo has campaigned on in opposition to the Tweed Daily, have further delineated the two.

The circulation figures really should be coupled with population growth figures. The West Australian showed an increase, but I’m thinking it may be negligible when put alongside population growth.

The figures are better than expected but it is sad to see The Australian doing so badly. Those at the helm of News Corp are doing themselves no favours by their open and sometimes covert support for the Coalition.

Once the trust of readers is lost and cannot be regained these days.

” Dead Tree ship is sinking ” Hope the captain goes down with his ship. Have seen free copies of QLD ‘s Couriermail at the Greenbank RSL public bar/ gaming den. I only read Free papers and there is one good one ” The Epoch Times ” its a World paper. Its only every fortnight at the local shopping mall/Plaza. I don’t like my money flowing to Rupert and use the Library for my mags.

Fascinating that the Illawarra Mercury (Saturday) is the only paper to show an increase in circulation. OMG we’re all ruined. Help.