Well so much for the booming employment market. Australian Bureau of Statistics figures out this morning show the seasonally adjusted unemployment rate was higher in October than it was back in January -

Not much of a boom. Well so much for the booming employment market. Australian Bureau of Statistics figures out this morning show the seasonally adjusted unemployment rate was higher in October than it was back in January — 5.4% now and 5.3% back then.

The so-called boom in employment that this month panicked the Reserve Bank into another interest rate rise has not even created enough jobs to account for the growth in the work-force! 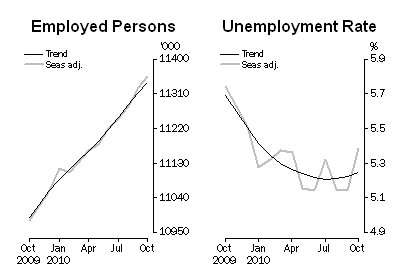 Another reason for Nauru. Watch for the pressure to mount on the Labor Government to reinstate the Pacific Island solution for the processing of boat people.

This morning’s High Court decision in favour of two asylum seekers has already provoked a strong response from Liberal elder “statesman” and former Attorney General and Immigration Minister Philip Ruddock. Describing it as it a “diabolical” decision, Mr Ruddock said the courts will struggle to cope with the number of cases.

In case you are worried about global warming. Never fear. God is here. As God said in a post-Flood promise to Noah in Genesis 8:21:

And how do I know this text means that that global warming is not a threat because God has promised not to destroy the Earth? Well, as the London Telegraph reports, a Republican Congressman who is putting himself forward as chairman of a powerful committee that deals with energy policy and its effect on the environment has told us so.

Reading from God’s post-Flood promise to Noah in Genesis 8:21, he said: “Never again will I curse the ground because of man, even though all inclinations of his heart are evil from childhood and never again will I destroy all living creatures as I have done.”

Mr Shimkus added: “I believe that’s the infallible word of God, and that’s the way it’s going to be for his creation.

“The Earth will end only when God declares it’s time to be over. Man will not destroy this Earth. This Earth will not be destroyed by a Flood. I do believe that God’s word is infallible, unchanging, perfect.”

It’s not just cricket. We punters are well aware of the home ground advantage when it comes to sporting contests but I had never thought of the consequences of playing in your own country and playing away when it comes to the success of a cricketing career.

It has taken two economists from the International Monetary Fund, of all people, to alert me to the consequences of where a Test player makes his debut appearance. Shekhar Aiyar and Rodney Ramcharan examined all international test cricketers who debuted between 1950 and 1985.

“We present evidence,” they write, “that a player’s debut performance is strongly affected by an exogenous source of variation: whether the debut series is played at home or abroad. This allows us to identify the role of luck – factors unrelated to ability — in shaping future career outcomes. We find that players lucky enough to debut at home perform significantly better on debut. Moreover, debut performance has a large and persistent impact on long run career outcomes.”

And before you start wondering what the point of such a cricketing study being made on the money of the world’s taxpayers, I should point out that there was a serious point to it all. Aiyar and Ramcharan were endeavouring to evaluate the importance on future prospects in any form of employment of the first job a person gains.

And their conclusion to that important question: “We also make headway in empirically distinguishing between competing explanations for why exogenous initial conditions exercise a persistent impact on career performance.”

In 10 years Japan will cut coal's 33% share of its energy production to 26%. That's one seriously big crisis for Australian coal exporters.

Genesis 8:21: “Never again will I curse the ground because of man, even though all inclinations of his heart are evil from childhood and never again will I destroy all living creatures as I have done.”

Richard, my theological reading is a tad under par therefore the above passage was unfamiliar and it was an enormous relief to see it quoted today. But the glee was short-lived further into the article when –

“Mr Shimkus added:… “ The Earth will end only when God declares it’s time to be over.”

Struth, talk about vague, that could be anytime He decides, on a whim, to spit the dummy. Now I’m back to being precisely where I started the day.