My Bulletin … the Tele’s spin …

The Gold Coast Bulletin was positively giddy today about the region's sparkling new "centre of excellence": a new Myer store. What a surprise that Myer is a major advertiser of the paper! Plus other media news of the day.

My store, my paper. The Gold Coast Bulletin was positively giddy today about the region’s sparkling new “centre of excellence” — a new Myer store, that is, at Robina Town Centre. There’s stories, lots of glamorous shots of Jennifer Hawkins, Myer’s taut public face, and breathless opinion: “Dazzle with a whiff of class”. 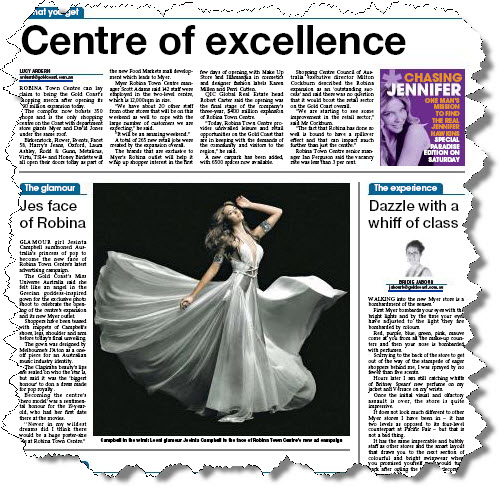 The Bulletin has been eagerly anticipating open day. As our Coast media watcher reports: “This puff, which looks like it’s been lifted straight from a press release, follows several fawning stories since late last year when the same shopping centre underwent an expansion. There were several prominently placed stories, talking about what a terrific addition this new and improved centre was to the Gold Coast.”

As they note, it’s probably a mere coincidence that Myer has pumped tens of thousands of dollars into News Limited coffers in the lead-up to the store’s launch. Take the October 28 edition for example … Crikey has probed the cosy relationship between the Bulletin and the world of spin before, including coverage of the V8 Supercar race and lobbyist-turned-columnist Graham Staerk. We’ll leave the final word to our local spy: “I accept we live in a world of media partnerships and stories such as these are a reality of modern print journalism. However, I have never experienced it anywhere as bad, as unsubtle and as insidious as the Bulletin.” — Jason Whittaker

Daily Tele cloudy on the facts. Speaking of puff, this little snippet popped up in our inbox yesterday: a “story” dedicated entirely to a Sydney restaurant and a wine company having a birthday. It included a delightfully in-depth menu description: “On offer is an exquisite sea food sharing plate and smaller plates including Sydney Rock oysters, tempura zucchini flowers filled with ricotta and pinot braised Veal cheek with Celeriac hash.” How deliciously word-count filling. Perhaps we’re being too harsh, but it’s difficult to feel part of the birthday festivities for one of “Australia’s acclaimed vineyards” from behind a computer desk. It’s especially hard when the vineyard being celebrated is actually in New Zealand. Not to worry, fact checking is tricky for the best of journos after a few glasses of Cloudy Bay. — Crikey intern Cat Wall

Diggers before poofs. Victorian Opposition leader Ted Baillieu, in the thick of a state election, was scheduled to chat to Doug Pollard this morning on Joy FM, Melbourne’s pink-hued radio station. But Baillieu stood him up, citing Remembrance Day. Not surprising, Pollard told his listeners, as “digger comes before poofter in the Liberal dictionary”.

Bitter much, Advertiser? The Geelong Advertiser loves its AFL team. Loves ’em. When former coach Mark “Bomber” Thomson quit, citing “burn out”,  in early October, the front page of the Addy mourned: “IT’S NOT YOU, IT’S ME”. The following day it had a double-page spread to thank its outgoing coach.

Fast forward to today. Yesterday, Thomson announced he’ll be signing on as an assistant coach for rival Essendon. The Advertiser is not happy … “The boss of Fairfax Digital’s media sales operation has defended the company’s use of autoplay videos, saying the majority of users prefer them to start automatically and have the option to stop them, rather than the other way round.” — Mumbrella

“A second wave of BBC strikes planned for Monday and Tuesday could be called off after the corporation said it was prepared to hold fresh talks on controversial pension proposals if the threat of industrial action is lifted.” — The Guardian

“The New York Times cultivates an image as the preferred read of the intellectual elite, but at least one of the paper’s higher-ups seems to think its customers aren’t all that bright.” — Forbes

Disgraced cyclist Lance Armstrong is finally making a public statement. Well, sort of. He's getting the Oprah treatment, having given his first interview since the doping scandal allegations to the influential talk show queen. Plus other media news.

Which pollie has a tatt of paw prints on their chest? ... Axe falls at Gold Coast Bully ... SingStar strikes at office Xmas party ...