Springvale Botanical Cemetery in Melbourne is melting down crematorium memorials for people who died as recently as 13 years ago, writes Swinburne journalism student Aliyah Stotyn. 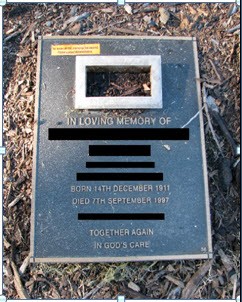 Springvale Botanical Cemetery in Melbourne is melting down crematorium memorials  for people who died as recently as 13 years ago. Orange stickers are placed on the memorials, stating, “The tenure on this memorial has expired. Please contact Administration.”

The reason is that the plots were purchased and reserved with a 25-year tenure — but the clock on that starts from the day the space is reserved, not the day a person dies, which can be years later.

The cemetery has placed the same orange sticker on some reserved cremation memorial sites that haven’t even been used.

The Necropolis Springvale annual report states that in the past eight months of the 2008/09 financial year they removed 1527 cremation memorials and Springvale Botanical Cemetery’s CEO, Russ Allison, said there are still 25,000 memorials that are expired.

Allison told Crikey that historically, the tenure started with the insertion of the ashes or earlier if the memorial space had been reserved: “You could have purchased it, it expired and it hadn’t been used.”

Cremation memorials that are purchased or reserved under the limited form of tenure are removed 25 years later if the next of kin or whoever reserved the space can’t be contacted.

If the relatives are contacted, they can decide what happens to the cremation memorial, including renewing the tenure or transferring it into perpetuity. If the memorial is disestablished, the plaque is photographed and melted down. If a relative wishes to keep the photograph of the memorial space, it is available to buy for $10.

All cremation memorials at Springvale were offered in perpetuity until this was replaced by a 25- or 50-year tenure system in the mid-’50s, according to Allison. However, there are memorials dated as far back as 1952 that have orange stickers on them.

Perpetuity was not reintroduced until 1998. At that time only 25 years and perpetuity were offered because the 50-year option had been phased out in the mid-’70s.

A source, who does not wish to be identified, told Crikey: “Personally I find it distressing that during the period (when temporary memorials were mandatory), families did not have a choice. I have knowledge of one case where the recorded next of kin was not contacted despite living at the same address as recorded in the cemetery’s records.”

Allison is unable to confirm whether or not people were aware when purchasing the tenure that, if they were unable to be contacted, the memorial would be removed after 25 years. He admitted the cemetery may also make mistakes in cases where cremation memorials purchased in perpetuity have tenure expired stickers on them.

“It’s possible … especially when you’re dealing with old records. If you make mistakes, you fix them,” he said.

Some families who are contacted choose to transfer the tenure into perpetuity, however, almost 80% of letters come back “address unknown”.

Melbourne General Cemetery, which also offers the limited tenure, is yet to remove any expired memorials, according to Gina Webling, the memorial sales consultant for Melbourne and St Kilda cemeteries.

Pastor Charles Lazaro, of Dandenong Baptist Church, believes a better option may be an extended tenure. He said, “a hundred years would cover two generations. For people who go overseas, if they come back, what happens then?”

Lazaro also suggested that the ashes of those whose families can’t be contacted could be kept in a vault or in storage somewhere.

“Subject to this Act, cremated human remains … if interred in a public cemetery may be interred for perpetuity; or for a limited tenure not exceeding 25 years in accordance with a right of interment.”

The 25-year tenure will eventually be available in all cemeteries under the new Southern Metropolitan Cemetery Trust, but Allison said “it’s not in a short-term objective, there are more important things to do”. If you care about CO2 emmissions, dont get cremated. Get buried. And in an environmentally friendly container that rots quickly.

I read in an Age article a year or two back, that cremation is one of the most CO2 producing things you can do in your lifetime. It is the final act of indifference to a world that is already struggling with chronic pollution levels.

@Jim: To carry the environmentally friendly bit further, you should look at the practicality of how cemeteries are used. Putting them in inner-city and continually re-using is probably wrong, one should use a fallow field out on a farm somewhere. And rotate crops…