Karl Bitar may be in total denial, but Julia Gillard's speech in Adelaide yesterday served as a sign the prime minister and her team have finally worked out that they need to start explaining to voters exactly what they want to do in power.

Karl Bitar may be in total denial, but Julia Gillard’s speech in Adelaide yesterday served as a sign the prime minister and her team have finally worked out they need to start explaining to voters exactly what they want to do in power. As Bernard Keane writes today:

“It’s a critical step, one that must be taken over and over over again until voters have the same sense of where Julia Gillard wants to take Australia as they had about John Howard, Paul Keating and Bob Hawke.”

“Australians are really asking me three related questions: What drives me, personally, in politics –- why do I do it, what gets me out of bed every day? What’s the government’s vision for Australia –- what do we want Australia to look like in five years, ten years? And what’s the government actually doing? What are the goals which make that vision real?”

All of which ties very neatly into Taking Back Our Politics — the theme for a Crikey conversation with former prime minister Malcolm Fraser, professor Geoff Gallop, Keane and Crikey editor Sophie Black this afternoon.

Join us at 3pm today for the chance to throw questions at our panellists about the 2010 election and its extraordinary outcome. Taking Back our Politics will explore how and if contemporary politics is up to the challenge of re-engaging the electorate, driving a new wave of reform and providing genuine leadership. 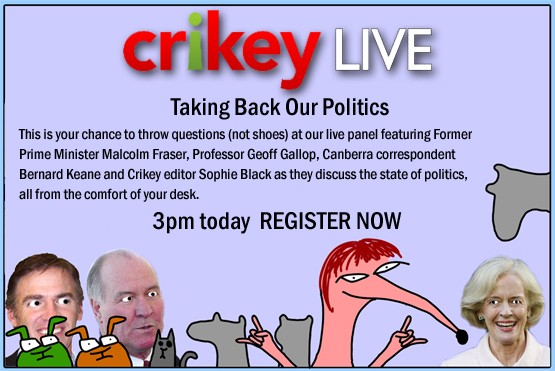