As the beleaguered Murray Darling Basin Authority sinks further into the public relations mire following its disastrous run of community consultations last month, the other side of the debate had a powerful ally in prominent spin doctors Socom.

As the beleaguered Murray-Darling Basin Authority sank deep into the public relations mire following its disastrous run of community consultations last month, the other side of the debate had a powerful ally in prominent spin doctors Socom.

Socom, a team of crisis management experts headed by veteran spinner David Hawkins, has emerged as a crucial player in amplifying grassroots discontent in regional Victoria, running a series of community meetings in parallel with the disastrous shouting matches auspiced by the MDBA.

The firm, operating on a fee-for-service arrangement and representing the Murray River Group of Councils and the Greater Shepparton City Council, has organised nine community meetings in the basin and has drafted form letters with rent-a-quotes from local mayors. It has also liaised with newspaper editors and news crews to secure positive coverage for their clients’ plight.

And while irrigators have enjoyed a dream run thanks partly to Socom’s savvy ahead-of-the-curve tactics, the MDBA appears to have been lagging in the spin war.

Speaking on ABC Radio National’s Bush Telegraph program two weeks ago, veteran PR practitioner Noel Turnbull claimed the authority’s message had been “hijacked” by the format of the community events, which had seen those with loudest voiceboxes dominating discussion. While Socom has been on the front foot, the MDBA, without an external firm on board, has suffered a string of humiliating defeats.

In a series of identical media releases distributed across regional Victoria, Socom argued that irrigators’ livelihoods were threatened over the planned boost to environmental flows, despite the changes being mooted for years.

“It was clear to us from reading the Guide to the Murray-Darling Basin Plan that the Murray-Darling Basin Authority had not considered the drastic effects its cuts to the water allocations would have on our communities; judging from the large groups that have been attending the Authority’s consultations, we weren’t the only ones who felt this way,” one release reads, with the quote attributed to “Cr XX”, the “Mayor of XX”: 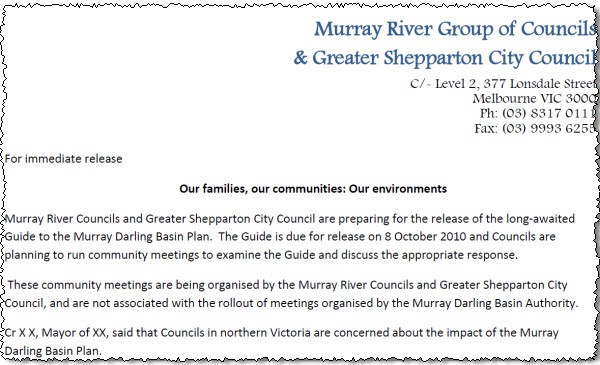 Although not playing a direct role in the ugly scenes at Shepparton, where MDBA bureaucrat Mike Taylor was assailed by mobs, Hawkins said he had successfully secured media interviews for Shepparton mayor Geoff Dobson. The group followed up the fiery meeting with two community events the following week at Mooroopna and a Shepparton TAFE.

Hawkins is a veteran of the PR scene, emerging as a crisis management expert after he successfully handled the Mars/Snickers extortion attempts in 2005 in which a mystery figure claimed to have poisoned chocolate bars across New South Wales. He told Crikey the Murray-Darling gig had spun out of Socom’s existing work with Regional Cities Victoria.

But his firm’s work has been the tip of the iceberg. As Bernard Keane reported two weeks ago, the NSW Irrigators Council and the Australian Environment Foundation have been keen players in the engineering of an RSPT-style campaign to stir up anger. In early October, irrigators’ council president Andrew Gregson was forced to defend its website, basinplan.com.au, from allegations that it was designed to mislead the public into thinking it was an official publication.

At the Griffith MDBA meeting, irate farmers burnt copies of the authority’s draft plan, although sources have told Crikey that the bonfire was kept alight by television news crews.

Hawkins denied Socom was drumming up dissent beyond organic levels: “I’m absolutely flattered that some people talk about our reach…but it’s really nothing like that.”

“A PR company cannot orchestrate this level of response…historically I’ve worked on a lot of issues and you just can’t do it. We tried to do it in terms of smaller campaigns at Deer Park where we wanted to underground the road under the railway station. And it completely fell flat.”

“It terms of the groups that are likely to do it, you’ve got Danny O’Brien from the National Irrigators’ Council, the cotton growers and the National Farmers Federation. But even then, if there isn’t genuine anger, you’re just not going to able to generate the response.”

Hawkins slammed the MDBA’s processes that led to the meltdowns in Shepparton and Griffith, saying that the format of the meetings were flawed. “How can you actually have a meaningful meeting with 4,000 people on the other end?”

Asked how Socom became involved, Hawkins said that “Phil Pearce from Shepparton (council CEO) gave us a call and said ‘can you give us a hand with this?’ and we had a teleconference and away we went.”

Hawkins said he already worked with local councils on a range of different issues and that the current work was “a natural extension”.

“We’re assisting the seven councils who are quite concerned about the plan…it certainly doesn’t recognise the social and economic impact…the bunnies left to pick up the pieces are local government.”

Socom will present the findings of its community meetings to the government at the end of November, with the submissions then used as evidence in Windsor’s parliamentary inquiry. “When we do the report it will contain the views of up 3-400 people so it should stack up as a credible piece of research,” Hawkins said. The firm is currently working on a plan to involve all 114 councils across the MDBA basin in the Canberra convoy before parliament adjourns for summer.

Meanwhile, a MDBA spokesperson confirmed that it was running all its PR internally: “The Authority is implementing its own stakeholder engagement process. The Authority has not employed a public relations company to run the consultation for the Guide to the Proposed Basin Plan or to create a media strategy.” However, the Authority did say it employed an internal engagement team of “less than 15” people to assist with pre-planning and logistics.

The popular Socom meetings will continue tonight at the Yarrawonga Community Hall. Local Moira mayor and beef and hay farmer Ed Cox told Crikey that there was a “lot of community angst about the whole plan” and that local submissions will be collected and sent to Canberra.

“We’ll all be singing off the same hymn sheet on that,” he said.

Good morning, early birds. Water Minister Keith Pitt will reportedly announce the end of environmental water buybacks, and insolvency firms are preparing for thousands of companies going broke by the end of September. It's the news you need to know, with Chris Woods

Good morning, early birds. Bill Shorten has claimed responsibility for the Labor Party's shock federal election loss, and the government addresses claims of water hoarding in the Murray-Darling basin. It's the news you need to know, with Rachel Withers.

Australia has waited too long for treaty

Crikey readers discuss the need for a First Nations treaty, the Murray-Darling crisis and the Crown scandal.

In the long run it does not matter how angry any organisation, political entity or individual gets, be it real or feigned, about their real or imagined needs or rights to a particular share of the water we have available to us at a particular time, because the total of the water available to us is determined by the state of health of the world’s atmosphere. The best available scientific evidence tells us that it is highly probable that the south east of Australia will have less water falling from the sky than that to which we have been accustomed. The sooner we stop the squabbles and work out how all our needs can best be met the better.
Under the Howard government there was partisan agreement on how that might be done was for an independent body to do the spade work, using all available material and for the Federal Parliament to make final decisions. There is a long road to travel so let’s all calm down so the work can proceed.
In the meantime we could get moving on our contribution to making the atmosphere healthy.

Carefully thought-through approaches to water policy have rarely been able to match emotive arguments. Policies have changed from time to time, but they tended to have changed because dominant emotive positions changed, rather than on grounds which relied on cold analysis of available data.

The Keepit Dam in NSW was initiated without the planners knowing what they were going to do with the water — all sides accepted dams were “good” in those days, so build them. The Ord River Scheme was approved despite both sides of Federal Parliament knowing it was economically unsound — their was a Senate Half Election coming up, and both sides knew could be a close thing in W.A. More recently, despite it being clear Melbourne would have a growing water supply problem in the years ahead, the new emotive tendency among so many swinging voters to be “green”, meant the most significant remaining potential dam site near Melbourne was placed in a park — in a close election the votes it bought might save the day, even if furthere down the track it causes Melbourne to run short on water.

The Murray/Darling Basin is bigger issue than any of its predecessors, so naturally you don’t want it bubbling over until after your election; and then ALL sides know it’s usually more effective to rely on propoganda rather than facts. It’s not easy to remain an optimist?

Crisis management sounds macho but it rarly involves physical realty as distinct from perceptions & spin.
It’s a sound, but too oft ignored, rule “after the Revolution, first shoot all lawyers.” I’m inclined to include PR flacks’n’hacks in the first wall liners.
It’d be pointless to waste bullets on economists as, left to their own beliefs, they’d quickly starve waiting for the invisible hand of the market to feed them.