Film success no blockbuster. Ben Eltham is spot on with his analysis (in Crikey Friday) of the New Zealand government subsidising The Hobbit. Hollywood Studios ruthlessly mine governments for subsidy and the benefits are short term and ephemeral. The notion that workers on a film are not employees but independent contractors is an absolute nonsense and fails […]

Film success no blockbuster. Ben Eltham is spot on with his analysis (in Crikey Friday) of the New Zealand government subsidising The Hobbit. Hollywood Studios ruthlessly mine governments for subsidy and the benefits are short term and ephemeral. The notion that workers on a film are not employees but independent contractors is an absolute nonsense and fails the most basic legal precedents at common law. The benefits will be completely short term until the next studio comes knocking seeking even greater concessions.

Meanwhile, Australia’s ‘offshore’ or ‘runaway’ production has been killed by the strength of the Australian dollar, like all our manufacturing industries, but it too is clamouring for further subsidy. The Americans used to call Australian crews ‘Mexicans with mobiles’. But there are always countries that are cheaper and as capable in the race to the bottom line. Now the Americans have gone and government subsidised film studios sit under utilised on the Gold Coast, Docklands and the biggest folly, Fox Studios, 22 hectares of publicly owned land.

A recent foreign correspondent writes: Richard Farmer yet again reveals his ignorance over foreign broadcast bureaus. The burning priority of any decent correspondent is to spend as much time as possible in the field gathering original material. That is what justifies having Australian journalists overseas. The reason ABC reporters are increasingly staying in the office and voicing agency pictures is not because they are lazy, cut-and-pasters as Farmer happily admits he was. It’s because short-sighted executives are cutting bureau staff and budgets while demanding constant filing for TV, radio, ABC Online, Australian Network and now News 24. To compare today’s hard-working, overstretched, under-funded correspondents with the shirkers of Farmer’s generation is as offensive as it’s inaccurate.

A punt on racing writers. So which Herald Sun racing journos will get the flick, as Crikey reported on Friday? Rod Nicholson would have to be the first — editor Simon Pristel has been trying to get rid of him for years.

Minchin for dinner. This turned up in my email inbox today. I have no idea who or what is behind it, but I could take a wild guess. So what does he have to say…? 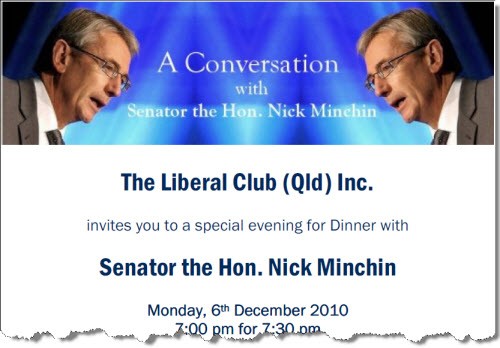 Religious leanings for Liberal candidate. There’s another Opus Dei politician for the state of NSW. Dominic Perrotet has won Liberal pre-selection for the third-safest Liberal seat in NSW, Castle Hill. A former student of the Opus Dei High School, Redfield, he also lived at the NSW University college run by Opus Dei — Warrane. David Clarke will be able to hold flagellation sessions in Macquarie Street come March next year.