Qantas will not be able to argue that there was no warning about the engine damage that sent its Flight QF32 limping back to Singapore yesterday.

Further repetitive inspections. Qantas will not be able to argue that there was no warning about the engine damage that sent its Flight QF32 limping back to Singapore yesterday. It was only three months ago that the European Aviation Safety Authority warned of the danger of just the kind of incident that occurred over Indonesia. 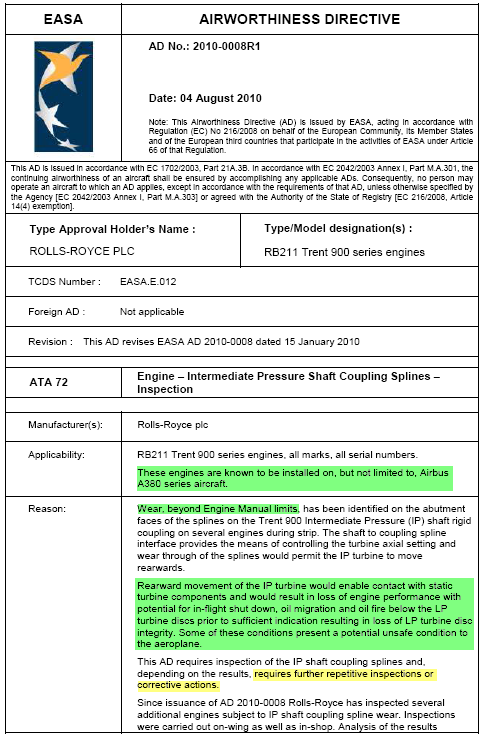 London’s Daily Telegraph reports this morning that in August a Lufthansa superjumbo flying from Tokyo to Frankfurt was forced to shut down one of its four Trent 900 engines shortly before landing, after crew detected a change in oil pressure. They did so as a precaution, rather than risk further damage to the engine which was later replaced. In September last year a Singapore Airlines A380 was forced to turn back two hours and 45 minutes after leaving Paris on a flight to the Far East, because of an engine malfunction.

No doubt Australia’s Civil Aviation Safety Authority will be questioned about how diligently they ensured that Qantas carried out all the steps necessary to comply with the EASA directive.

A zoophilia defender. In these days when politicians fall over themselves to show they are on the stern side of the law and order debate it was something of a surprise to hear the Australian Capital Territory”s Chief Minister John Stanhope advocating clemency for a Canberra Raider rugby league player accused of practising a little zoophilia at the club’s Mad Monday celebrations.

Apparently the practice depicted on a photo circulating on the internet — John Stanhope said he had not actually seen it and I have no intention of doing so — is not a criminal offence in the ACT.

The local RSPCA, though, wants it made one but given what the Chief Minister said on local ABC radio it would be rather strange if he agreed to do so. He thinks the player should not even be dismissed from the Raiders which, if his advice is accepted by the club, should lead to some interesting sledging next season about dog lovers.

A small victory for smokers. The seemingly never ending persecution of tobacco smokers has at last had one small set back. In the Netherlands the government has this week agreed to amend the anti-smoking law to allow smokers to light up again in small owner-operated bars which are less than 70 square metres in size and which have no other staff. It makes an old puffer like me want to move to Amsterdam!

Fond memories as a foreign correspondent. I well understand the anger of ABC journalists about moves to cut back the size of its overseas bureaus — see Jason Whitaker’s piece in Crikey on Tuesday and one in The Australian this morning: My months in London for the Australian Financial Review many long years ago were a delight. Into the office by eight, a quick rewrite combining a few pars from each of the Financial Times, The Times and the Telegraph (I became something of an expert at disguising plagiarism) and off to Twinings for tea with Peter Bowers by 11am. I never had so much fun as a journalist nor did so little real work neither. It was a real doddle and most of the reports I now see and listen to from ABC correspondents in far flung places are little more than electronic versions of the old cut-and-paste life.

The  big problem is that these days it is so easy for readers and listeners (let alone bosses) to know that there is very little that an Australian paid correspondent actually contributes. The dreaded internet has exposed things in a way that did not happen when foreign papers arrived days late by mail and teleprinters chattered out the words. And if you want an Aussie accent it is just as easy to do a voice over from Sydney, Melbourne or Canberra as it is from London, Los Angeles or Tokyo.

Alas I must admit my head tells me that the ABC cost cutters are correct. Scarce resources should be spent in places like Afghanistan where there is currently little or no coverage of the Australian war effort because there is no source to knock-off.

Pick a Republican. Just because those mid-term elections are out of the way we don’t have to suffer American election withdrawal symptoms. It is not too early to start thinking about the 2012 Presidential race. The markets are already off and running and it’s the early punter who can get the value. Herewith the Crikey 2012 Republican Presidential Candidate indicator giving the current probability of victory for the big field.

You will find details of all the Crikey Election Indicators for Australian, American and other election contests at The Stump blog here.

The 2017 Crikeys: the best and worst of Aussie business

As I watch Insiders on ‘our’ ABC I want to know who specifically finances Gerard Henderson’s Sydney Institute?

Tom – I have no idea. The best I can do is repeat what is on the Institute’s website:
The Sydney Institute receives support from the Australian business community. Nicholas Johnson is the Institute’s chairman, Rob Ferguson is deputy chairman and Paul Murnane is treasurer. However, supporters of the Institute extend well beyond the business community and include academics, public servants, editors, journalists, commentators, writers and members of the professions – as well as other Australians who recognise the importance of debate and discussion.