In today's Media Briefs, ABC outlines bureau changes, Quest launches new Sunshine papers, Channel Seven almost gets a Wankley for their Packed to the Rafters coverage, the government is listening to social media and more...

ABC outlines bureau changes. ABC journalists who’ve expressed anger over being left in the dark over changes to international reporting finally have some answers today, with an email from ABC news director Kate Torney detailing the changes to foreign bureaus and cuts to office staff. Torney says a “series of misleading reports” forced her to outline the changes before staff briefings have been completed and ahead of a meeting with a concerned union scheduled for next Tuesday.

The email confirms ABC bureaus in Jerusalem, London and Moscow will close and self-contained office space will be rented from APTN, the television arm of Associated Press. The bureau in Bangkok will be remodelled and shared with APTN, which will also provide “some technical, infrastructure and administrative support” to ABC bureaus. Camera operators in Jerusalem and London will be employed by ATPN, meaning a “potential reduction in the number of support staff employed locally”.

“There are no plans to extend these agency arrangements to other cities where we have bureaux,” Torney wrote. “Importantly, there are also no plans to ‘outsource’ any of our journalism. No producer or reporter roles will be taken over by APTN as part of these administrative and technical arrangements.”

As revealed yesterday, Middle East correspondent Anne Barker has been recalled from Jerusalem, with that post to be staffed by a single correspondent (Ben Knight) and producer. Barker will eventually take up residence in New Delhi, replacing Sally Sara who will open a new bureau in Kabul, Afghanistan early next year. The ABC has maintained there will be no net loss in correspondent positions, however producer positions or hours will be cut in Tokyo, Bangkok and Moscow.

“Having carefully reviewed our coverage and the editorial requirements, we believe the appropriate staffing for the Middle East bureau is a single correspondent and a camera operator/editor, augmented when the news agenda requires with back-up resources from other bureaux or from Australia… We are also reviewing the administrative and support functions of the ABC office in Amman,” said Torney.

Savings are being invested in the new Kabul newsroom and a plan to “examine ways to expand our coverage of the Pacific”. More money will be invested in travel assignments, training domestic journalists to “supplement” correspondents in the field and to “augment” the 24/7 international production desk in Sydney to “better manage the demand on correspondents”. “As a result of this review,” Torney said, “ABC News will have journalists in more places overseas; our correspondents will travel more and have the chance to do more original reporting. There will also be more opportunities for ABC staff to work overseas on short-term assignments.” — Jason Whittaker

Quest launch new Sunshine papers. What’s this? Somebody is starting a brand-new newspaper? Two, in fact? In this day and age? A brave move by Quest Newspapers, the Queensland community paper division of News Limited, with the launch today of the Caloundra Journal and Maroochy Journal, joining the Noosa Journal in serving the booming Sunshine Coast region.

David Crossen is editor-in-chief across the three titles, and will directly edit the Maroochy Journal. Nathan Evans has been appointed editor of the existing Noosa title, while Candice Holznagel will lead the Caloundra paper.

Both new papers launched with big scoops today: Holznagel reports for the Maroochy Journal on the mother of a Bali Nine prisoner who went bankrupt funding her son’s use of drugs in Kerobokan jail, while the Caloundra title has an interview with former federal MP Mal Brough declaring war on sitting Fisher representative and parliamentary deputy speaker Peter Slipper. Canberra hacks are now on the case… — Jason Whittaker

Not quite Wankley-worthy, but it’s close. After 2.3 million people watched soapie character Mel Rafter die in a car crash on Tuesday, it’s no surprise that Channel Seven has been cashing in on the juggernaut success of Packed To The Rafters. 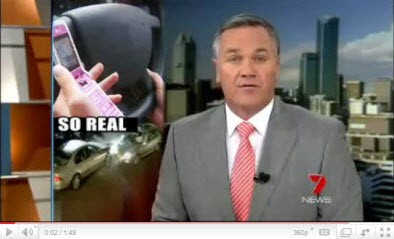 But a news story on why the death scene was ‘so real’? It’s no wonder Channel Seven News is the most-watched in Melbourne. — Tom Cowie

“The chief executive of Ten Network Holdings’ television business, Grant Blackley, could be elevated to the board. He could also become the network’s new managing director if a peace deal with dissident shareholders James Packer and Lachlan Murdoch can be achieved.” — The Australian

“When the Department of Human Services began talking to customers on Twitter and Facebook, general manager Hank Jongen said the agency decided to adapt its talkback radio strategy to the new medium.” — ZDNet

“Responding to complaints from American and British officials, YouTube on Wednesday removed from its site some of the hundreds of videos featuring calls to jihad by Anwar al-Awlaki, an American-born cleric based in Yemen who has been blamed for radicalizing Muslims involved in a string of terrorist attacks.” — New York Times

BBC journos to strive over pensions

“The BBC faces a news blackout tomorrow across its main TV and radio news programmes, including Radio 4’s Today, BBC1’s 10pm bulletin and Newsnight, as star presenters including Fiona Bruce and Kirsty Wark join a 48-hour strike over pensions.” — The Guardian

I have some further questions about ABC bureaux changes. If the ABC owns that building in W1, then it is worth a fortune these days as it is in the heart of London. The sale of this building would be enough to finance half a dozen ABC bureaux around the world. Could somebody tell me if this building is owned or rented by the ABC, and if it is owned by the corporation, where will the money go? And secondly, as a former Intake Editor at APTN, I am interested to know why has the ABC agreed that London’s camera operator should be “employed through APTN” if s/he will “work exclusively for the ABC”? Seems to me that this is letting go of a major resource and camera operators are always snaffled the instant a big story breaks.

The Mal Brough story is hardly a scoop, Crikey. Similar story in Sunshine Coast Daily, which has been leading the charge on the Peter Slipper story, days earlier, followed then by Seven Local News, Courier-Mail, and ABC. Nice PR for News Ltd though….