Who said we were the lucky country that escaped the impact of the global financial crisis? Australians with a mortgage are clearly paying a high price for its impact!

The creeping margin increase. At the end of the 1990s Reserve Bank figures show that the standard mortgage rate for Australian banks was 1.75 percentage points higher than the Reserve’s official interest rate.

Since then the upwards margin creep has gathered pace with the latest gap between the Commonwealth Bank’s standard rate and the Reserve’s official rate now at 3.05 percentage points. 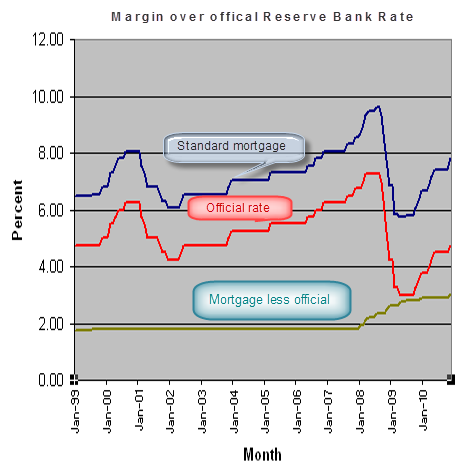 Who said we were the lucky country that escaped the impact of the global financial crisis? Australians with a mortgage are clearly paying a high price for its impact!

The advantage of incumbency. Shadow Treasurer Joe Hockey is about to learn that the more successful you are in opposition — when an election is a long time away — the less likely you are to benefit from it.

Governments have that wonderful capacity to pinch your ideas if you succeed in damaging it with them. That is clearly about to happen with competition policy and the banks. Treasurer Wayne Swan might really prefer to do nothing other than give lectures to the banks about their home mortgage and small business lending rates but Jovial Joe has had sufficient impact to force him to adopt at least some of his proposals however irrelevant they eventually turn out to be.

This Labor Government is as opinion poll driven as any I have known and will go as far as is necessary to stop being bashed along with the bankers.

The danger for the banks is that it all gets out of hand and action is actually taken that affects their future profitability.

They think you really know. Perhaps it was the recent memory of the fawning reception given by the investment community  to James Packer and Lachlan Murdoch with their buying into television Channel 10 but the death overnight of Jerry Bock had these words running through my mind:

The most important men in town
will come to fawn on me
They will ask me to advise them
like a Solomon the wise
“If you please, Reb Tevye
Pardon me, Reb Tevye”
Posing problems that would cross
the Rabbi’s eyes 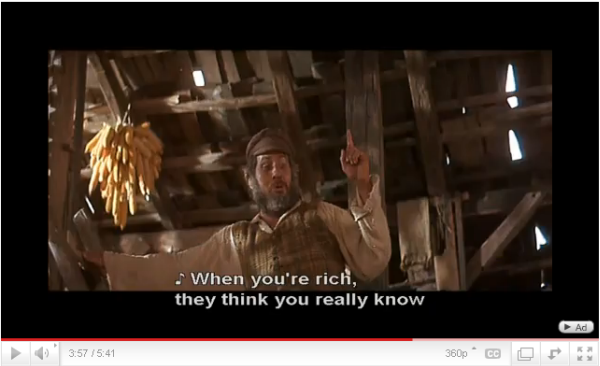 The simple message from Fiddler on the Roof, for which Jerry Brock wrote the music for the stories about a Jewish family in 1905 Russia, just seems so applicable to modern Australian life. How better to explain the reverence with which the two rich young sons of media barons who knocked off those hundreds on millions of shareholder’s money on their last joint venture than to realise “it won’t make one difference if I answer right or wrong, When you’re rich they think you really know.”

A very small quantity of easing. With the next lot of unemployment figures in the United States expected to show a rate of 9.6% or so and with the new Congress now having a majority clearly opposed to any stimulus by way of increased government spending it was not surprising that the Federal Reserve decided yesterday it had better do something about easing monetary policy.

The big problem with interest rates already virtually at zero was how to do it. Hence the reliance on the so-called quantitative easing – the printing of dollars to inject more liquidity into the system.

To implement this Federal Reserve’s new policy of quantitative easing, the New York Fed plans to buy $850 billion to $900 billion in Treasury notes over the next five months, including $600 billion in new purchases and about $250 billion to $300 billion to reinvest the proceeds of maturing mortgage-backed securities. The average duration of Treasurys purchased by the Fed will be five to six years.

That reads like a lot of dollars but, as Californian economist Brad De Jong points out, the five-year note carries an interest rate of 1.17% per year.

“The Federal Reserve is thus,” he writes, “changing the supply of assets by taking onto its own balance sheet… wait for it… wait for it… duration risk that the market is currently willing to pay $7 billion a year to avoid. To take $7 billion a year of duration risk off of the private sector’s books in a global economy that still has more than $60 trillion of financial assets is a change in “credit conditions” equivalent to what would be achieved in normal times by a coordinated one basis point reduction in short-term interest rates by the world’s central bankers.”

the junior counsel for rich and keeling in the one tel case gave a talk recently and noted that james was sharp as a tack talking with the legal team, then quoted the judge on how many time young packer failed his memory in the witness box.

lachlan similar crisis of memory, didn’t say whether he was otherwise mercurial out of the witness box.

and the upshot of the talk was that ASIC’s legal performance was a debacle. grim