News Limited likes to preach transparency, but its first-quarter financial report has slashed the already limited amount of information about the performance of its Australian newspapers. Plus, the Press Council adjudicates, Croc Watch and the Port Douglas and Mossman Gazette's victory lap.

Apples and oranges in News profit. News Limited likes to preach transparency, but its first-quarter financial report released overnight has slashed the already limited amount of information about the performance of its US, UK and Australian newspapers.

This is now a company where nearly 60% of operating income (of $US1.15 billion) in the quarter came from the Fox cable news and pay TV businesses in the US — it had an operating income of $US659 million in the quarter, far away the biggest contributor and up a huge $US146 million over the same period in 2009. That was a rise of 28.4%. Clearly being right-wing and anti-Obama pays for Murdoch.

On top of the cut in information about newspapers, News Corp seems to have restructured this division by including in it the integrated marketing business, which was not included in the publishing business back in September 2009 figures, or the full 2010 figures. This further clouds the sketchy details of the division’s performance. That’s the division where News had to pay half a billion in damages to a competitor over claims of anti-competitive behaviour that were supported by the American courts.

Perhaps the change was to use the tax losses, perhaps it’s to cut costs, but there was no explanation at all. For that reason the reported lift in profit contribution is not strictly comparable. — Glenn Dyer

Press Council adjudications get a run. “Sam the Koala” and a video of a puppy-throwing woman are at the centre of the latest adjudications by Australian Press Council, as a number of complaints against News Limited’s biggest tabloids, the Daily Telegraph and Herald Sun, were published by the two papers today.

Two stories about “Sam the Koala” — a victim of the Black Saturday bushfires — and the efforts of a Mary-Ann Martinek to trademark the marsupial’s image and name were at the centre of one complaint, as the Council considered that the Herald Sun had made an inaccurate and unfair reference to Martinek’s time in the military and that she had not been given a right of reply to the story.

Martinek also took umbrage with the Herald Sun’s focus on her withdrawal of sexual assault allegations, however the Council did not uphold that aspect of the complaint. 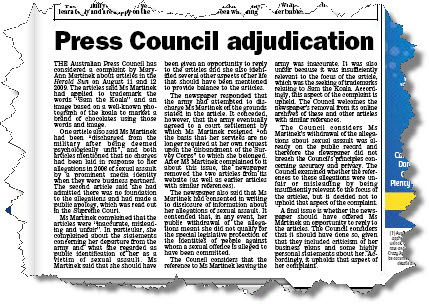 The Daily Telegraph online edition was pulled up for their use of a video of a woman throwing puppies into a river, after a complaint was made to the Council that the video was distressing that she had been mistreated by the newspaper’s staff. After an initial complaint to the Tele‘s newsroom, a warning was placed above the video that the footage “contained animal cruelty and may be offensive to some viewers”.

In considering the complaint, the Council decided that a warning should have been included above the video in the first place. They also decided that the newspaper was not obliged to provide a public apology to complainants. — Tom Cowie

Croc watch #1: Another day, another croc chase from the NT News. But this was a real scoop — photographic evidence of a real live attack… But hang on a minute… Croc watch #2: Our other favourite newspaper, the Port Douglas and Mossman Gazette, has a croc scoop of its own — a massive reptile dubbed Fat Albert embroiled in a conspiracy theory… We’d like to thank Derek the Dugong… The Gazette is also crowing about its … ummm … prestigious News Award, named the best community newspaper among Rupert Murdoch’s Australian stable. Who are they to argue?

Here at Crikey, we’re convinced the award was bestowed at least partly due to their star columnist — Derek the Angry Dugong (we present, once again, a full-sized version for your reading pleasure). Miranda Devine, eat your heart out… Gyngell gets his fingers dirty on print

“The new head of PBL Media David Gyngell says he is looking forward to stepping out of his comfort zone and improving the magazine business.” — The Australian

What if Steve Jobs ran newspapers?

“The Chicago Tribune is probably not on Jobs’ acquisition list, but the following blueprint is how he might strategize its metamorphosis — and since new thinking is what newspapers need, what better choice than to think outside the Apple.” — Editor & Publisher

They named names, and now they must close

“A Ugandan newspaper that published names and pictures of what it said were homos-xuals in Uganda and called on authorities to hang them has been ordered to cease publishing, a gay rights leader said Monday.” — Reuters

“A court in Croatia has convicted six men for the mafia-style murder of high-profile journalist Ivo Pukanic. Mr Pukanic, the editor of Nacional magazine, was killed by a car bomb in October 2008, alongside his marketing manager, Niko Franjic.” — BBC News

The size if the head of the croc in the NT news photo suggests that either:

(a) the crock was much bigger than 80cm.

or (b) that the croc was crock.

Thankyou. It may be seen as unfair factually not to include in this STK article about Ms Martinek that there was an ‘Addendum to the adjudication’ which reads:

“Addendum to the adjudication:
http://www.presscouncil.org.au/pcsite/adj/1483.html

Ms Martinek also complained that that an accompanying graphic on the first article misled readers about how the proposed chocolates would appear and that by saying she was unavailable for comment the second article wrongly implied that she was shirking an opportunity to respond to the allegations.

The Council does not consider that these matters conveyed inaccurate or unfair meanings of the kind she described. Accordingly these aspects of her complaint are dismissed.”

Ms Martinek’s complaint to the Council also alleged a criminal offence by the newspaper relating to disclosure of personal information. The Council advised her that if she wished to pursue this allegation she should do so through the criminal justice system as it was beyond the remit of the Council.”