Plenty of movement this week as the Victorian election campaign kicks off.

Plenty of movement this week as the Victorian election campaign kicks off. The coverage so far has been interesting, as it seems a comfortable win for John Brumby’s Labor government but everyone knows that there’s no such thing as comfortable wins any more in Australian politics, so the pundits are desperately trying to sift the tea leaves and come up with something clever.

Joe Hockey starting to feel he might have pulled the right lever as his colleagues fall in behind him the way they definitely didn’t last week, while Nick Xenophon and the Greens have definitely joined that bandwagon and some bank bosses clearly ignore their PR people once again — well why would you listen to someone who earns 1/100th of what you do? 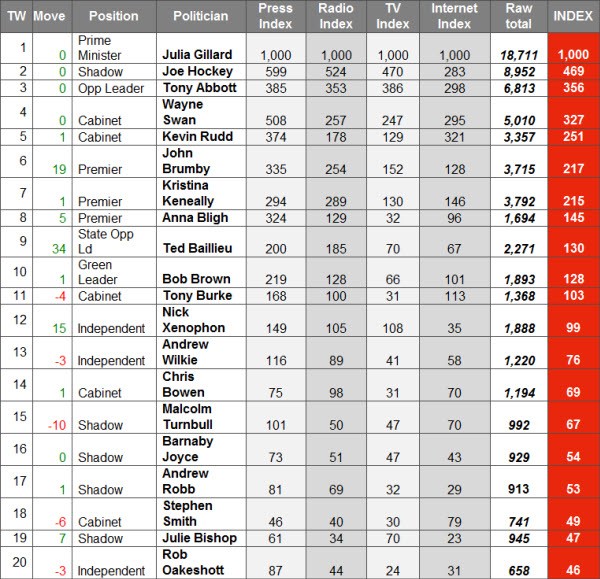 Kristina Keneally hits the top of the pile after her battle with Julia and the death of the solar feed-in tariff after less than a year, but overall the numbers remain low.

He may not have won that 13th Cup, but he was clearly the major celebrity of the past seven days and it took an unprecedented French-Australian-American collaboration to beat him.

All eyes on the racing game