No change has ended up the favourite way for those predicting what the Reserve Bank board will announce before its members settle down to see how they fare in their Melbourne Cup sweep.

The 2.30pm winner. No change has ended up the favourite way for those predicting what the Reserve Bank board will announce before its members settle down to see how they fare in their Melbourne Cup sweep. 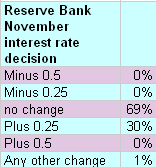 Going with the sheikh. Any man who can con the bankers of the world into losing billions on fantasy building constructions in Dubai but still maintain his personal wealth so he can fly his horses and himself around the world to race meetings has got to have something going for him. Hence I hope I draw Holberg in the Crikey office sweep.

The Rudd style gets even weirder. The management style of Kevin Rudd seems even stranger after this morning’s report by Phillip Coorey in the Sydney Morning Herald telling of the then Prime Minister and his two senior ministers being so suspicious of Lindsay Tanner that they used to hold fake pre-budget meetings to ensure their plans did not leak. What is truly frightening if the story as told is true is that Julia Gillard and her now deputy Wayne Swan were party to such nonsense.

A nice little war will do the trick. And you thought the Australian press had some nutters as commentators. How about that once great paper the Washington Post where its Pulitzer Prize winning political columnist David Broder has called on Barack Obama to bomb Iran to get the economy moving. Broder, often called the Dean of the Washington Press corps, argues that if Obama cannot spur economic growth by 2012, he is unlikely to be reelected. He asks if Obama can harness the forces that might spur new growth says that one of those forces is the power of the business cycle.

What else might affect the economy? The answer is obvious, but its implications are frightening. War and peace influence the economy.

Look back at FDR and the Great Depression. What finally resolved that economic crisis? World War II.

Here is where Obama is likely to prevail. With strong Republican support in Congress for challenging Iran’s ambition to become a nuclear power, he can spend much of 2011 and 2012 orchestrating a showdown with the mullahs. This will help him politically because the opposition party will be urging him on. And as tensions rise and we accelerate preparations for war, the economy will improve.

When the so-called serious analysts in the United States start speculating in this way we can only hope that Julia Gillard does not believe Australia once again has to go all the way with the USA. It is frightening stuff even when Broder tries to qualify his remarks in this way:

I am not suggesting, of course, that the president incite a war to get reelected. But the nation will rally around Obama because Iran is the greatest threat to the world in the young century. If he can confront this threat and contain Iran’s nuclear ambitions, he will have made the world safer and may be regarded as one of the most successful presidents in history.

Let them drown ‘cos I’m going to miss my connection. A wonderful tale of human nature from the Netherlands newspaper De Telegraaf overnight. Passengers of a luxury cruiser have complained that the ship arrived late in port because it stopped to save two fishermen from drowning. The Eurodam, with 2100 passengers on board, discovered the fishermen at night in a sinking vessel near the Bahamas.

When it became clear the coastguard would not be able to get to the scene on time, the Canadian captain and his Dutch crew changed course and picked up the two Americans with one of the ship’s rescue boats. In spite of going full speed to make up for lost time, the ship arrived one and a half hours late in US port Everglades. There were chaotic scenes as passengers scrambled to collect their luggage, fearing they might miss flights as a result of the delay. A number of passengers complained that the rescue had made them late.

Interesting comment on wars to stimulate the economy, I thought thats why all American wars were fought, apart from the need to make the world safe for American corporations to rape and pillage.