Media heat map: the papers that brought down the ALP in Qld

So why did the ALP draw a blank in the four tropical seats in Queensland after holding three (Leichhardt, Dawson and notionally Herbert) before August 21st? Part of an answer might come from seeing what the papers in the major centres in those electorates were reporting on during the campaign, writes Jason Wilson, lecturer in journalism at the University of Canberra.

There’s a lot of media out there. How to keep up with the messages our politicians, papers and pundits are trying to sell us? In my research, I’ve started using a tool called Leximancer, which automates a lot of the hard graft of content analysis. Unlike word maps such as Wordle, Leximancer doesn’t just count the frequency of words, it derives themes and concepts from large chunks of text, showing their prevalence, their importance, and the relationships between them.

The pretty pictures are great, but they also serve as a way into interpretative analysis, and you can use them to drill down further into the text. The estimable Graham Young uses Leximancer on qualitative polling; I’ve started using it on political speeches, interviews and media coverage. You can get more detail about how the package works elsewhere, but here I’ll try to show you an example, from my own research, of how it can be useful.

One question that hasn’t been given enough consideration post-election is why the ALP drew a blank in the four tropical seats in Queensland after holding three (Leichhardt, Dawson and notionally Herbert) before August 21. Part of an answer might come from seeing what the papers in the major centres in those electorates were reporting on during the campaign.

To dig out the big themes, I went to Factiva and dragged out all election-related coverage — between Gillard’s ascension on the June 23 and election day — from the Cairns Post (Leichhardt), the Townsville Bulletin (Herbert), and the Mackay Daily Mercury (Dawson). (I also included letters to the editor, not least because they make up a fair proportion of the content in regional papers). I cranked the large swathes of text through Leximancer (those interested in the settings I used can find them here — but I really didn’t stray far from the defaults).

The big circles are the overarching themes — major concepts dealt with in the coverage fall within them. They’re heat-mapped — the most central concepts fall towards the “warmer” end of the spectrum. 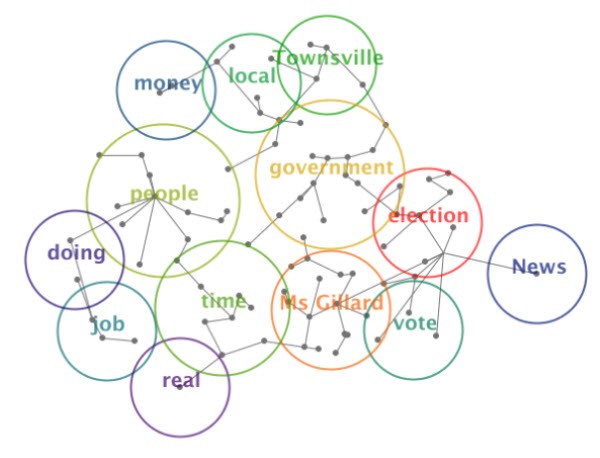 In The Bulletin, “election” is unsurprisingly a strong theme. The other big themes deal mostly with local concerns. But “Ms Gillard” is a major, relatively central theme in the coverage.

If we dial up the visibility of concepts falling under that theme, we see that the Prime Minister’s name was strongly associated with “mining” and “tax”: 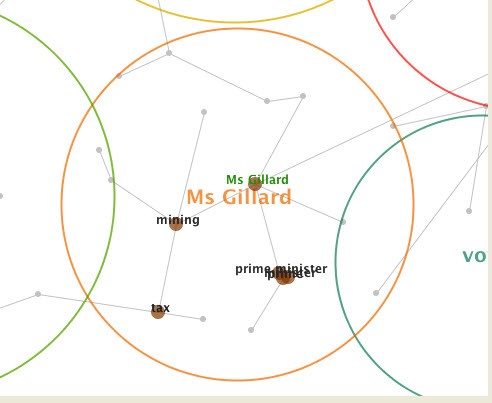 If we drill down, we find that the Bulletin’s coverage associated Gillard more strongly with those concepts and the compound “mining tax” than any other concept. There are 23 occasions in the Bully’s election coverage where Gillard is mentioned together with the tax, and it’s one of the strongest associations in the data. Gillard was pegged with this issue, and when we click through to the coverage it’s pitched to local anxieties. 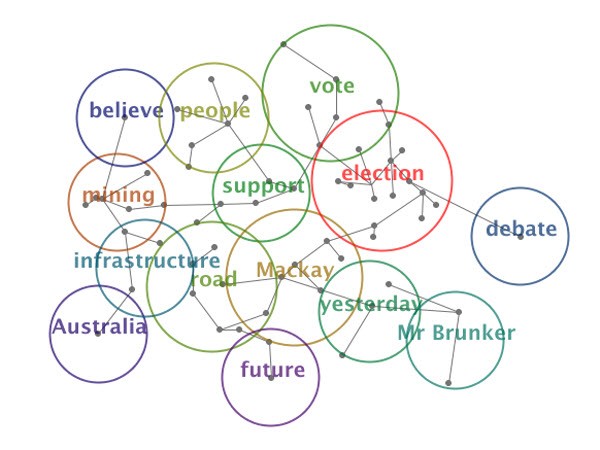 In The Mercury, “mining” is the most central concept apart from “election”. Drilling down, the strongest associations for that concept are telling: “Labor”, “companies”, “industry”, “pay”, “money”, but strongest of all, “tax”. The mining tax received 147 separate mentions in the Mercury’s coverage — more than any other national issue, or any local issue that I can find.

This in a city for whom the coal boom has brought unprecedented prosperity. 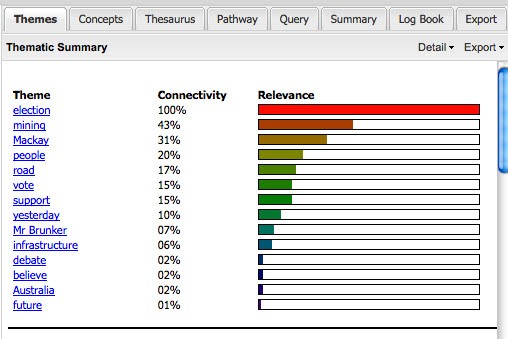 The Cairns Post is a more complicated story, but Cairns is a tourist city. In the centres where the boom in mining and minerals processing has left everyone richer, no other national (as opposed to local) issue really got a look in. Asylum seekers, climate change, the NBN, government spending or Rudd’s axing (or even Rudd himself) are not consistently addressed, and sometimes not addressed at all.

The Minerals Council of Australia unleashed a big, locally targeted ad spend in these papers in the lead-up to the election. I’m not suggesting that directly affected the coverage, but it did help to frame the issue in a way that the coverage was bound to play into.

In communities where newspapers have a reach that metro dailies can only dream about, there’s part of an explanation for two or three seats that would have produced a majority had they fallen otherwise.

The papers brought the ALP down? Really? In the absence of any ‘control’ study (e.g. a look at newspapers outside these electorates), surely the obvious conclusion is that the mining tax proposal itself brought down the ALP.

I didn’t say it brought the ALP down. I said it was the only national issue that received extensive coverage in those electorates. I wouldn’t disagree that the ALP’s handling of the issue contributed to the problem. A paper outside those electorates wouldn’t be a “control” in the strictest sense, and space is limited.

“I didn’t say it brought the ALP down.” No, you didn’t, but the headline (which I presume you didn’t write) did.

In any case, the data still admit the possibility that the mining tax proposal in and of itself worked against Labor, as distinct from the ALP’s ‘handling’ of it. Surely it is unsurprising that this was the case in communities ‘where the boom has brought unprecedented prosperity’, and accordingly featured prominently in their local media coverage.

It’s difficult to separate the issue from the handling of it (timing, consultation, inherent difficulties in selling it), but I don’t think we disagree in essence. It may not be ‘surprising’ that it was featured so prominently, but (a) that was part of the reason for selecting the case – to demonstrate how the technology works by confirming something that makes intuitive sense; (b) it is slightly surprising that other national issues with some relevance to those communities and their prosperity received virtually no coverage at all.

The over-interpretation of Leximancer output has worried me in the past (though not particularly in this case). Could the relationships mapped suggest associations that, at times, aren’t necessarily meaningful?

The old saying that “not everything that’s significant is meaningful” springs to mind.