The Age staff are preparing to abandon their pods on Thursday in solidarity with their Fairfax Community Network comrades, Overington sans knickers and many other media brief treats.

Fair go, Fairfax rally is go. Age staff are preparing to abandon their pods in solidarity with their Fairfax Community Network comrades on Thursday, who are engaged in a bitter battle with the NSW-based Rural Press headkicker-turned Fairfax CEO Brian McCarthy for an adequate share of the company’s profits.

The three week industrial campaign, which was backed last week by senior members of the storied Age House Committee, was sparked by a below inflation wage offer from the media giant that would have seen already-modest journo salaries reverse in real terms. After six months of negotiations, the company also won’t budge on the issue of paid maternity leave and has refused to reimburse hacks with the official Australian Tax Office-sanctioned rate for the use of company cars.

FCN and Age scribes will begin strike action outside the company’s gleaming Media House at 12:30pm Thursday, with insiders suggesting McCarthy could be the target of several humorous chants mocking his $3.163 million salary package, a 52% increase on the last financial year. — Andrew Crook

Overington, sans knickers. In the online edition of The Australian yesterday, as Crikey reported yesterday, this par appeared in Caroline Overington’s gushing account of the News Limited school speech night:

“The awards are the social highlight of the News Limited calendar and there’s a good reason for that: most of the time, it’s tough to get a spare pen around here. Journos famously have to keep a spare pair of knickers in the desk drawer, lest they get called out on an overnight job, because a claim for a new pair won’t get through the bean counters.  But then, once a year, the coffers spill open for finalists in the News Awards.”

That knotted someone’s knickers. When the ink hit the newsprint, it had been cut to:

“The awards are the social highlight of the News Limited calendar as the coffers spill open for finalists for one night every October.” 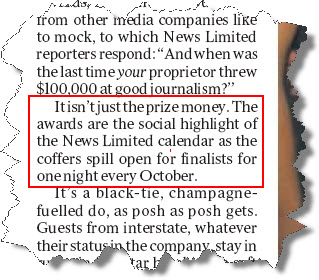 Clearly, nothing must be written that might dim the light of the Sun King’s progress around his southern realm. — radio presenter and Sydney Morning Herald columnist Mike Carlton TV news bloopers. This might be the worst opening to a television news bulletin we’ve seen… Packer, Murdoch and Ten: can’t they all just get along?

“The Ten Network Holdings board and James Packer have held further talks amid hopes that the two sides can come to an agreement.” — The Australian

Watch the ABC — on Channel Seven

“Yahoo!7 has signed a rather surprising deal with the ABC that will see select archival ABC shows made available via PLUS7.” — TV Tonight

“Foreign news coverage in four of the UK’s most widely-read national newspapers has fallen by almost 40% in the past 30 years, according to a report published today.” — The Guardian

Where are US politicians placing their TV ads?

“Dancing With the Stars, where Bristol Palin hopes to fox trot and quick step her way to a disco ball trophy, has the most political ad purchases on prime-time television among both Democratic and Republican media buyers. But the bipartisan consensus on America’s TV habits apparently ends there.” — New York Times

What constitutes success for The Times?

“So, The Times and Sunday Times are about to go public on how many people have signed up to the paywall. That means the numbers can’t be too bad then, even if it remains fairly early days for the great pay-for-general-news experiment. Expect an announcement later this week, although probably not when News unleashes its first quarter numbers on Wednesday.” — The Guardian