In official correspondence to a Canberra primary school student named Christopher, sent on April 15 2003, John Howard lays out the case for the Iraq war in six succinct paragraphs

*This article was originally published on November 2, 2010.

John Howard was blunt when it came to explaining to the younger generation his reasons for backing the US invasion of Iraq in 2003, according to a leaked letter from the former PM’s inner sanctum.

In official correspondence to a Canberra primary school student named Christopher, sent on April 15 2003, Howard lays out the case for war in six succinct paragraphs — a refreshing contrast from his voluminous public statements over the past week as part of promotions for his 512-page door stopper Lazarus Rising, which discusses the rationale for the war at length.

The distraught youngster had written to Howard in the weeks after the bombs rained down on Baghdad in March, expressing his horror over the offensive that resulted in the deaths of more than 100,000 Iraqi civilians. But the unexpected reply from the PMO pulled no punches. 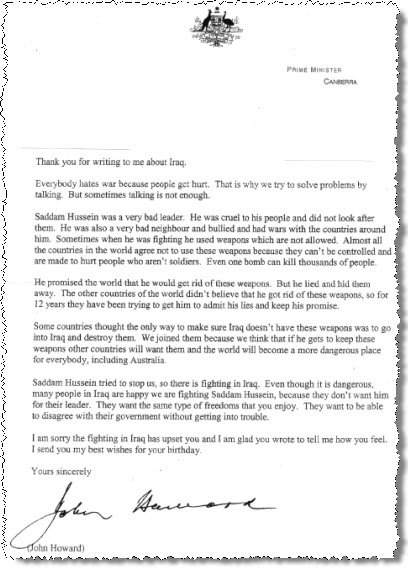 “Everybody hates war because people get hurt,” the one-time member for Bennelong begins. “That is why we try to solve problems by talking. But sometimes talking is not enough.

“Saddam Hussein was a very bad leader. He was cruel to his people and did not look after them. He was also a very bad neighbour and bullied and had wars with the countries around him.”

Rather than expand on the thousands of pages of circuitous legal reasoning drawn up by compromised US and British security services, Howard’s 315-word missive explains the conflict in the starker, more simplistic terms favoured by US President George W Bush.

The loyal deputy sheriff maintains that a cache of weapons of mass destruction were in Saddam’s possession, despite the evidence being thin on the ground:  “Sometimes when he was fighting he used weapons which are not allowed. Almost all the countries in the world agree not to use these weapons because they can’t be controlled and are made to hurt people who aren’t soldiers.

“Even one bomb can kill thousands of people,” Howard adds helpfully, a reference not to the Allied forces’ brutal “shock and awe” campaign, but to Saddam’s apparent fondness for blowing up his own citizens.

A strikingly succinct assessment of the dictator’s intransigence when dealing with UN weapons inspectors is also offered: “The other countries of the world didn’t believe that he got rid of these weapons, so for 12 years they have been trying to get him to admit his lies and keep his promise.”

“Saddam Hussein tried to stop us, so there is fighting in Iraq,” George W Bush’s “man of steel” explains.

The blunt salvo concludes with an expression of regret, rather than an apology, for the war: “I am sorry the fighting in Iraq has upset you and I am glad you wrote to tell me how you feel. I send you my best wishes for your birthday.”

Over the past week, Howard has reiterated his hard-line Iraq stance, dodging shoes on last week’s Q&A program to proclaim that the invasion was “justified on a number of grounds, including the properly entertained belief at the time about weapons of mass destruction”.

Echoing the unrepentant rhetoric of fellow traveller Tony Blair, the keen golfer said the decision to shower the country in shrapnel was “a legitimate act of anticipatory self-defence against future terrorist facilitations by a regime which had a track record of both regional aggressions and support for terrorist activities.”

The authenticity of the letter was confirmed by former Howard government staffers when contacted by Crikey.

“Letters would often be tailored depending on the correspondent”, a senior insider said.

Howard’s former chief-of-staff, Order of Australia winner Arthur Sinodinos, told Crikey the tailoring of letters “reflected a practice of trying to answer every piece of correspondence … John Howard took a lot of interest in the letters he received.”

However, the PM’s starry-eyed stance was not shared by some of his most senior confidants. Former cabinet minister Nick Minchin distanced himself last week from his ex-boss, saying the 2003 attack had led to a “debacle”.

“I regret we were not able to be more successful in persuading the Bush administration to remain focused on Afghanistan rather than open another front in Iraq,” the retiring South Australian Senator admitted as part of a parliamentary debate.

And ‘Yes Virginia, there is a Santa Claus’ too.

“Saddam Hussein tried to stop us, so there is fighting in Iraq,”

Sorry folks, but this sentence does not make any sense, a great chunk seems to be missing ie: the chunk between Saddam Hussein’s behaviour and the allied invasion. I’ve never understood that missing bit – and it appears irrelevant to The Lying Rodent.

“A legitimate act of anticipatory self-defence against future terrorist facilitations” – and heaven knows what Poland had planned for Nazi Germany, before their use of the same sort of “reasoning”.

They lying rodent, the bliar and the smaller shrub should all be in the Hague for their war crimes, instead the strut like bantam cocks pretending they got it right and never, ever mention the dead.

Howard told my 10 year old grand daughters in 2002 that locking up kids had to be done to “protect our borders”, he forgot to mention that most were from Iraq where that very bad leader was in charge.

And did anyone note that the OO is now consulting the Pakistan and Malaysian governments about asylum seekers and noting that they should all stay home?

We did that in 1938 as I read about it. Did wonders for the world didn’t it as we all sat on our putrid hands and let Hitler fry millions of human beings for sport.