And they’re away for the SA ALP Stakes. A Melbourne Cup-like field has emerged for the leadership and deputy leadership of the South Australian ALP. Premier-in-waiting (or So He Thinks) is education minister and poster boy for the Left in SA, Jay Weatherill. The problem is, the dominant Senator Don Farrell-led Right faction of the […]

And they’re away for the SA ALP Stakes. A Melbourne Cup-like field has emerged for the leadership and deputy leadership of the South Australian ALP. Premier-in-waiting (or So He Thinks) is education minister and poster boy for the Left in SA, Jay Weatherill. The problem is, the dominant Senator Don Farrell-led Right faction of the party has handicapped Weatherill at top weight, i.e. they won’t have him.

When Premier Mike Rann steps away in 12-18 months’ time, as most pundits are predicting, Labor hard-heads are hoping some form of ‘dream ticket’ will emerge, with Kevin Foley as premier and speedy Tom Koutsantonis (both from the Right) as his deputy. However, in the eyes of voters that would be akin to digging up Phar Lap and running him in the 2010 Melbourne Cup.

More palatable to punters would be a Left-Right ticket. Could it be promising mare Grace Portolesi from the Left and that serviceable colt John Rau? Who knows? One thing is certain, this won’t be the race that stops the nation.

Pressure mounting at Nine. The pressure is getting to a certain news director in Melbourne as ratings continue to disappoint both him and the top brass in Sydney. He delivered an over-the-top spray to a senior female reporter that had her in tears late last week. It was so nasty another senior female had to step in to stop him going further. Even the executive producer was taken aback.

Churchill won’t cross the picket line. Melbourne’s glorious spring weather last week was kind to Fairfax Community Newspaper employees picketing outside Fairfax’s Media House over the company’s miserly offer of a 2% below inflation wage rise. As FCN employees struggle for a pay increase said to amount to less than $40,000 per annum additional total cost to Fairfax for the entire FCN workforce, Fairfax executives are thin on the ground. The Age‘s managing director Don Churchill, responsible for the lowly offer, has not been seen at Fairfax headquarters over the past few days.

All FCN offices are mulling strike action on Thursday and Friday and the union is also planning a media campaign to encourage people to rally on the steps of Media House. The Age House Committee, helmed by the indefatigable Greg Baum, is slated to consider the issue at its meeting later today.

Newspaper circ watch: Last week I had a renewal notice for my weekend subscription to The Age for $70 for 20 weeks. Coincidentally, I also received an invitation from MyCareer to subscribe to The Age for $52 for weekends for a full year. When I clicked through there was an offer for $99 for a seven-day subscription for a full year. Seems like 20 weekends for $70 was a bit of a dud deal.

All aboard for Melbourne Airport? Is Melbourne Airport getting a rail link? Clearly, the airport thinks it’s on the agenda at some stage in the future, with the recently updated master plan (May 2010) showing a line coming in from the west… 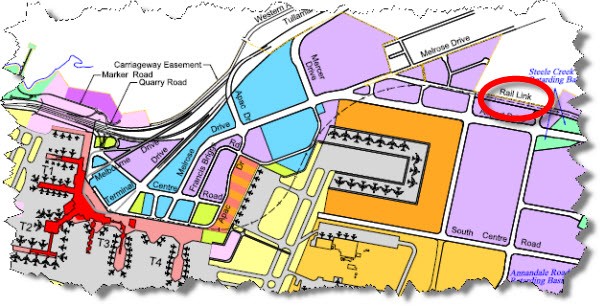