“Has anyone asked the question why Austrade’s senior trade commissioner to Japan needs to maintain separate residences outside of the embassy at tax payers’ expense?”

Austrade’s Senior Trade Commissioner lives in a apartment outside the embassy compound in Tokyo.  This is her only residence and is strictly within agreed guidelines for overseas government officials.

She doesn’t have two houses, as your “Tips and Rumours” of 29th October suggests.

No contested election at Ten as Falloon dodges the vote

Stephen Mayne writes: Re. “James Packer should run the gauntlet of an AGM vote at Ten” (Friday, item 23). Following the publication of this story in Crikey about the Packer-Ten situation, Ten’s general counsel Stephen Partington emailed back to say nominations had already closed for the December 9 AGM so my candidacy won’t stand.

Today Mr Partington has also confirmed that Nick Falloon won’t be standing for election at the AGM despite his three year term as executive chairman expiring.  Seeing as a new independent chairman will be appointed at some point in the future, Mr Falloon is using the exemption from elections that applies to managing directors.

Dave Horsfall writes: Re. Mark McDougall (Friday, comments) who wrote: “The copper lines are the most reliable form of communication in such emergency events. Power can go down but the copper line didn’t used to need 240 volts to keep operative.”

Mark seems to think that copper telephones are powered by fairy-dust or something.  They’re not; they are powered from the local exchange.  When the earthquake hit, a major trunking exchange (Hamilton) went out, and 000 calls could not be made. I was there at the time, providing emergency radio communications to assist the SES in patrolling the streets looking for chimneys about to fall, etc.

David McKelvie writes: Re. “Turnbull v Conroy: how Coalition broadband plan stacks up” (28 October, item 3). 12Mbs or 100 Mbs … something I can only dream of.

I live in Bunbury (supposedly WA’s second city — a major regional centre) and I have a Telstra Turbo Internet stick and am supposed to get 1Mbs, am lucky to get 50kbs and often it runs at around 2 or 3 kbs…. one day it was flat out at 0.6kbs — so whatever happens let’s hope it lives up to its promises.

And while they are at it, it would be nice if the current technologies actually delivered what they promised!

Phil Price writes: Peter McDonell (Friday, comments)  doesn’t seem to acknowledge the quick progression of technology. You might be delighted with 12Mbps now, but 10 years ago we were delighted with 256Kbps.

In another 10 years our bandwidth requirements will have grown beyond what the copper network can provide. To stream Blu-Ray quality HD would require 25-35Mbps, which is something that the existing network just will not support.

Content providers will upgrade their connections as command grows, just as they already have over the past 20 years when we all started on dial-up. Quota allowances will also grow, and ISPs will offer content unmetered as revenues from services such as movie rental-and-streaming replace video rental stores.

To assume that today’s internet services will be status quo for the future is simply short-sighted.

Mick O’Mara  writes: I on’t know if you took in the below article in Saturday’s Oz, “NBN a waste of money, says Japan IT mogul“: 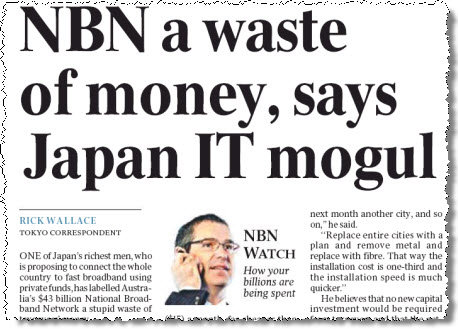 The headline had nothing to do with the article. Masayoshi Son briefly argued that private enterprise could build a fibre national broadband cheaper than governments but was wholeheartedly in support of a glass fibre system.

Another example of Oz bias?

Andrew Stuart writes: Why is The Australian newspaper carrying out such an unrelenting, constant negative attack on the NBN? Can Crikey please tackle this issue — no one else seems to be writing about it.

James Burke writes: Re. “Richard Farmer’s chunky bits”  (Friday, item 14). Richard Farmer wonders why Iraq and Afghanistan have been ignored in the US Congressional election run-up. Well, Richard, take a look at who’s contesting the election — many of the candidates don’t have any familiarity with the US Constitution, even as they stuff photocopies of it into the bands of their ridiculous tricorn hats.

Iraq and Afghanistan mean as much and as little to them as Laban and Melchizedek. As in times past, the Americans will doubtless resolve their issues without resorting to Civil War II.

I’m more worried about Australia. Our gallant PM has just welcomed Rupert Murdoch — whose Fox News channel is a prominent sponsor of the aforesaid loons — into Parliament House, for a chat. What was the chat about? Will we ever know?

If Julia Gillard was doing the right thing by Australia, she would’ve read the riot act to this out-of-control hatemonger, and threatened to snuff his business interests in Australia if he didn’t pull his head in. Does anyone seriously believe she would do that? Or would any other leader of a major party?

If Australian politicians can’t acknowledge the beam, why should Americans worry about the mote?

Rupert and the USA:

Ignaz Amrein writes: So, Rupert Murdoch predicts, that in a very few years it will be possible to have all the energy we want from economic and cheap and small nuclear plants. Is that the same man who predicted that, once Iraq was liberated, the oil price will be $20 per barrel?

Helen W. Dehn writes: Re. “Movement at Meanjin: undervalued journal stuck between old and new” (Friday, item 17). I don’t think that publishing online will devalue the journal or its clams to permanence: after all one can always print the articles one finds interesting and/or useful, but online publication will probably test the editors of the journal, and perhaps the peer review process, because it is doubtful that all articles published will be judged by readers as equally interesting and/or useful.

Ideas don’t die, but they are continually reshaped and refined, often by readers, but if they can’t be successfully put into practice, or incorporated into something different, then perhaps it’s just as well to leave them floating in cyberspace — and journals such as Meanjin were probably thought by some to devalue the book…

As much I wish it to be otherwise, the only way I can see an end to Aboriginal disadvantage and discrimination in Australia is with their participation in the economy on western terms.

Unfortunately history shows that only way to benefit when your culture is so overwhelming dominated by another is to become part of the dominant culture.  The angst felt by Aboriginal people at the loss of their culture is real, but the ongoing machinations that are attempting to retrieve what has been long lost only serves to prolong it.

It is time put aside what has been lost and make the best of what is here now. Australia will be culturally poorer for it, but at least people can move forward hope and purpose and not the heart wrenching hopeless that I see in eyes of so many Aboriginal people I meet.

Tony Crosthwaite writes: Re. “Letter from … Argentina, and a death that stopped the nation” (28 October, item 16). Over the years the Roman Catholic Church in Argentina has made apologies of sorts for its role in the “Dirty War”, the designation given to the thousands of Argentines that were tortured and murdered by the military junta that ruled the country from 1976 to 1983.

In 1982, on the other side of the world, the first ever papal visit to Britain occurred in dramatic circumstances. When the proposed visit was first announced in 1980, no one could have foreseen that the visit would take place in the midst of a war between Britain and Catholic Argentina over some islands in the South Atlantic.

These events provided the Vatican with an enormous dilemma. It regarded the British trip as a significant step towards bringing the Anglican Communion back into its fold. However if the visit was to proceed it risked undermining the Vatican’s base in Latin America, no small consideration when that continent comprised such a large proportion of the world’s Catholic population.

The Vatican’s solution was to hastily arrange a papal visit to Argentina to take place almost immediately after the British visit. This required the cooperation of the murderous military junta then headed by General Galtieri.

Your readers may be interested in a recently published article on this episode of church history. The article contains two photos from the Argentine papal visit which are of particular interest. Both feature Pope John Paul II and the head of the military junta, General Galtieri. One photo shows the Pope nursing Galtieri’s granddaughter while seated on a couch between the General and Mrs Galtieri. The other photo records Galtieri kneeling before the Pope as the pope leans over to embrace and kiss him.

These days the history of institutions that lay claim to moral leadership tends to be scrutinised closely to see if their past conduct supports their claim. So far as the Vatican and the Roman Catholic Church goes, their conduct in relation to the Argentine military junta 1976-83 warrants such scrutiny.

Razer: what have we learned from THAT Meanjin cover?

Re. Argentina – the Vatican going out of its way to support a Fascist government? Who’d have thunk it 😉

Ignaz, Rupert’s biggest mistake was not his prediction of oil prices, but rather thinking that the invasion of Iraq would result in them being ‘liberated’…