The Cup carnival strikes up the brand

Swathes of foreign visitors and corporations inject consumer dollars and marketing investment into the spring racing carnival, proving just what can be achieved when taxpayers aren’t picking up the tab.

The spring racing carnival reaches a crescendo tomorrow with the running of the 150th Melbourne Cup, but it is not merely the horseflesh that draws media attention. With more than 1700 local and foreign accredited media, and swarms of PR and marketing operatives, the carnival has quietly become Australia’s premier branding exercise.

And few do it better than naming sponsor Emirates Airlines, with its luxurious marquee and a swathe of A-list guests, handpicked by event manager Judy Romano (who has looked over the Emirates tent since 1997) and one of Australia’s PR leaders, Anne Morrison, Emirates has almost created its luxury brand in Australia on the back of racing. The $3000-plus per head Emirates marquee dominates Millionaire’s Row in Flemington’s Birdcage enclosure sitting alongside Myer, Tabcorp and Swiss bank UBS, which appears to have rebounded from the perils of the GFC with a styling marquee over-looking the track. On Derby Day, Dubai’s ruler Sheikh Mohammed bin Rashid Al Maktoum visited the Emirates marquee while his uncle, Emirates chairman Sheikh Ahmed bin Saeed Al Maktoum is expected tomorrow

While Lavazza tends to draw a young, international celebrity to its somewhat clustered marquee towards the end of the Birdcage (this year, Kelly Osborne popped in for an hour and in 2003 the then relatively locally unknown Hilton sisters set off a media frenzy while in 2008 an under-dressed Snoop Dog made a fleeting appearance), it is Emirates, Myer, Lexus and Mumm that tend to draw the biggest names in business and entertainment. In the Spanish-themed Emirates enclosure on Derby Day were stars of Packed to the Rafters, City Homicide, Melbourne’s “it” couple of Andy Lee and Megan Gale as well as ubiquitous MasterChef judge Matt Preston.

The Lexus enclosure played host to the Channel Nine team, including the team from Today and Erica Packer (wife of James) while Ten’s team huddled in the Myer tent, alongside Jennifer Hawkins and former young chef of the year and Coda co-owner Adam D’Sylva. (One notable absentee from Birdcage is the struggling Foster’s, the former major sponsor has a low profile, especially compared with Pernod Ricard’s Mumm (Pernod has been mooted as a possible buyer of Foster’s) and Yellowglen champagne and Lion Nathan’s James Boag, which maintain high-profile marquees).

The benefits of the marquees are difficult to quantify. The branding and public relations exposure generated by Millionaire’s Row has the symbiotic benefit of giving journalists entertaining copy (few articles fail to mention Emirates’ plumbed toilets and tapas bar) and reaching a target market far more effectively than more traditional advertising. Unlike the grand prix, which has struggled in recent years to generate corporate or mainstream attention and last year lost more than $49 million, the Victorian Racing Club operates the spring racing carnival with virtually no taxpayer assistance (other than benefiting from a Victorian public holiday on Cup day and generous water allowances, which were not necessary this year). The grand prix also required a further $7.2 million in capital works at its Albert Park location, despite the Auditor-General finding the event created no economic benefit to Victoria.

Few public events can lay claim to genuinely spinning off economic benefits. While the Victorian Major Events Company allege that $1.4 billion in “economic benefits” is generated annually from the likes of the Australian Open Tennis and grand prix, many of those so-called benefits are merely a redistribution of discretionary spending. Instead if going to the theatre or a show or purchasing cable television, if someone decides to go to the tennis or grand prix, that spending does not create any economic benefit, rather, redistributes money to another recipient.

The spring racing carnival does appear to be a rare exception to that rule. Swathes of foreign visitors and corporations inject consumer dollars and marketing investment in the event, proving just what can be achieved when taxpayers aren’t picking up the tab.

A Birdcage flutter: how the boldly rich and beautiful spend Cup day 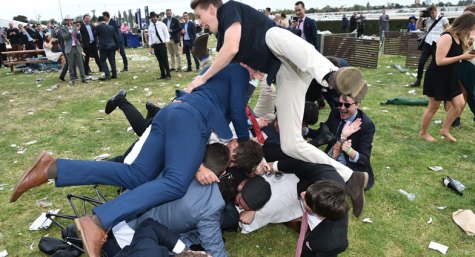 What the wait staff see at the Spring Racing Carnival

Adam Schwab’s article on the cup carnival shows Melbourne’s major events are only successful if the government does not run them!

The Grand Prix has cost taxpayers hundreds of millions of dollars – much more than the published losses, which are calculated after the government subsidies are paid in. Also, the Victoria Auditor-General’s economic study in 2007 (a proper cost benefit analysis) found it was an economic loser for Victoria.

These government announcements that lump all major events together are pure spin because the grand prix’s losses are hidden under the successful events that have honest attendance figures, honest TV ratings, are run by experts and are part of Melbourne’s sporting and arts culture.

It’s about time Victoria’s two major parties realised what the rest of us already know – the Grand Prix is a failed business model because of three things: Bernie Ecclestone’s secret contract, the annual temporary set up and pull down and the dishonesty. All successful events are run in proper, well planned venues by competent and successful Melbournians, with little or no government subsidies.
Peter Logan, Save Albert Park media