Crikey says: if we amplify everything we hear nothing

Jon Stewart and Stephen Colbert's Rally to Restore Sanity gifted the world some very eloquent protest posters over the weekend.

Jon Stewart and Stephen Colbert’s Rally to Restore Sanity gifted the world some very eloquent protest posters over the weekend. 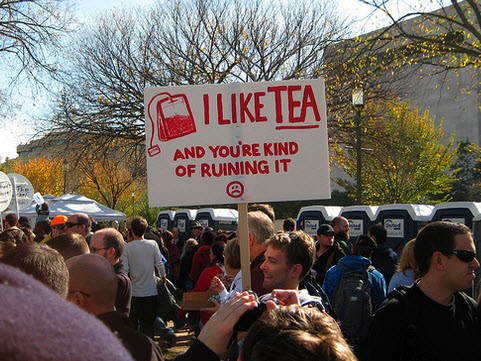 But that might be about it, Guy Rundle writes today. He reports from Washington:

“It was exciting, it was wild, it was a mad carnival — and, it has to be said, something of a fizzer. It was all a little bit nothing, a little bit meh, it was something that had to be great to be good, and was just all right. It was odd and underdone and half-assed. It was a perfect expression of American progressivism today.”

So what to take out of all of it?

Never mind the Tea Baggers, Stewart saved his best for the media machine, all of which can be boiled down to the same themes that we’ve been hashing over back here in the wake of the election:

“The country’s 24-hour political pundit perpetual panic conflictinator did not cause our problems but its existence makes solving them that much harder. The press can hold its magnifying up to our problems bringing them into focus, illuminating issues heretofore unseen or they can use that magnifying glass to light ants on fire and then perhaps host a week of shows on the sudden, unexpected dangerous flaming ant epidemic.

“If we amplify everything we hear nothing.  There are terrorists and racists and Stalinists and theocrats but those are titles that must be earned. You must have the resume. Not being able to distinguish between real racists and Tea Partiers or real bigots and Juan Williams and Rick Sanchez is an insult, not only to those people but to the racists themselves who have put in the exhausting effort it takes to hate — just as the inability to distinguish terrorists from Muslims makes us less safe not more. The press is our immune system. If we overreact to everything we actually get sicker — and perhaps eczema.”

Rundle’s right, Stewart doesn’t exactly reach a zinger of a conclusion; there’s no call to arms. But it took a satirist to get more than 150,000 people to show, with their presence and their piss-take posters, that the: “…image of Americans that is reflected back to us by our political and media process is false. It is us through a fun house mirror, and not the good kind that makes you look slim in the waist and maybe taller, but the kind where you have a giant forehead and an ass shaped like a month-old pumpkin and one eyeball.”

Meanwhile, the father of Fox News makes an appearance in this week’s Essential Report on attitudes towards the media. When asked:

“Rupert Murdoch owns most of Australia’s metropolitan newspapers including The Australian, Herald Sun, The Telegraph and The Courier Mail. Should the government allow one company to own the majority of Australia’s major newspapers?”

If you’re looking for an issue that transcends the insanity of party politics, look no further.

Tweet this: it’s time for journalists to listen and learn — and dump aggressive hot takes

2020 was a record year for journo job losses. What comes next?

The Sanity rally “gifted” the world some memorable posters? Gifted? Is there something wrong with saying it gave the world the posters? I heart Crikey, but ….

Have you read Death Sentence? The Death of the English Language? Weasel Words? Have you read any Orwell, Burchfield … oh, never mind. We’ll all be back grunting soon.

Kim we are back to grunting. Dillard is running around Asia trying to pretend she can stop refugees in their tracks and demanding other countries do it for us. The media never report that this is law breaking on a grand scale and Dillard is so dumb she doesn’t care so long as she can pander to the ignorant grunters.

And the ABC is still wrongly reporting that stopping said refugees is “breaking up a people smuggling ring” when in reality it is breaking the law, denying them their legal rights and jailing them at our expense in another country.

It’s amazing to me that our media in this country are even more worthless than the US, but the US at least have NPR to tell the truth. We have a bunch of nobodies all whining the same drivel.

And the OZ must be choking today after granting Klan an award for his drivelling stories and lies about the BER because the next report shows great value for money, economic stimulus and all round good work and results.

The quote from Rundle: “It was exciting, it was wild, it was a mad carnival — and, it has to be said, something of a fizzer. It was all a little bit nothing, a little bit meh, it was something that had to be great to be good, and was just all right. It was odd and underdone and half-assed.’ Could have been about himself.

Now that is scary.