Voters in marginal inner-city ALP seats under threat from the Greens are rebelling on the question of education, with Fiona Richardson's wobbly seat of Northcote the most militant in the state when it comes to backing blackboards, according to exclusive Roy Morgan research commissioned for Crikey.

Voters in marginal inner-city ALP seats under threat from the Greens are rebelling on the question of education, with Fiona Richardson’s wobbly seat of Northcote the most militant in the state when it comes to backing blackboards, according to exclusive Roy Morgan research commissioned for Crikey.

As one in five Victorians signal their intention to vote Green at next month’s state poll, more than a quarter of Richardson’s constituents nominated schools as a key concern, with the issue second only to climate change as the district’s top vote puller, according to thousands of phone interviews conducted between January 2007 and August 2010.

The burning issue of a better education was mirrored around the inner ring of marginal seats poised to abandon Labor, with voters in Brunswick (24.2%), Melbourne (22.8%) and Richmond (17.8%) among the most virulent agitators on the issue.

In Brunswick, where 24.2% of voters identified education as a priority, potential candidate Phil Cleary has staked his candidacy on the delivery of a new high school in Coburg while school activists are threatening to run their own candidates further north in Pascoe Vale if the state government doesn’t deliver.

Education minister Bronwyn Pike’s seat of Melbourne was the eighth most education obsessed electorate in Victoria which, despite a witty Labor campaign mirroring Dwight Eisenhower’s 1952 presidential pitch, is almost certain to be snagged by Brian Walters SC on November 27.

And significant numbers of voters in formerly-safe ALP seats that are now marginal, including Albert Park (17.5%) and Prahran (24.4%), also said improving education was a sure-fire vote winner. However the issue paled in the country and outer suburbs, with fewer than 10% of voters in the regional outposts of Bellarine, Swan Hill and Carrum rating the issue as important. 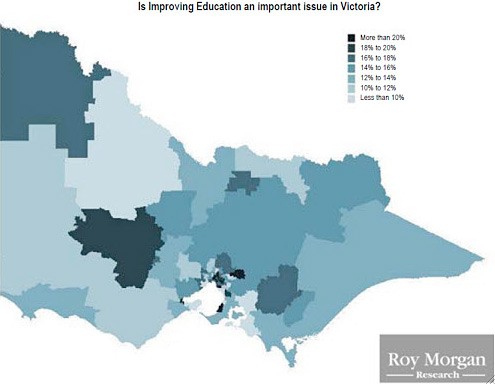 Yesterday’s Newspoll showed the Greens commanding nearly a fifth of the state-wide first preferences and the party has pledged to put pressure on the government to bolster public education if it emerges with the balance of power.

Morgan chief Gary Morgan told Crikey that education resonated with working families keen to advance their offspring’s life chances: “If you ask families about what matters, one area that is most concern is the quality of education at the primary and secondary school level.

“Education is also a concern in the western suburbs of Melbourne where voters consistently say that those in private education get a better education than those that get a public education.”

The latest two-party preferred polling released by Morgan last night has the ALP at 52% — up 2.5% since June 2010 — compared to 48% for the Coalition, according to phone queries carried out over the past two weeks.

The result, which would leave Labor with a slender five-seat majority, was identical to the Newspoll numbers in yesterday’s Australian. The Greens have been gaining ground in both polls despite its Morgan result of 13% tracking lower than Newspoll’s record-setting 19%.

The war over the impending Greenslide kicked up a notch yesterday, with former premier Jeff Kennett using his 3AW slot to slam federal senator and arch factional enemy Helen Kroger’s extraordinary anti-Greens sledge on the front page of the Herald Sun. In a sequence of events strongly reminiscent of the odious injecting room scare tactics pursued by the paper under the editorship of Peter Blunden and backed by Fiona Richardson’s husband, dumped ALP state secretary Stephen Newnham, Kennett suggested Labor apparatchiks had written the piece in order to shore up the party’s vote in the inner-north.

Kroger said the Liberals would be foolish to follow the tradition of placing Labor last — a strategy she backed as state secretary of the party in 2002 — and called on Liberal leader Ted Baillieu to instead relegate the Greens to avoid their “radical” policies which were “fundamentally opposed to Liberal beliefs”.

But Kennett, sporting the beginnings of a moustache for Movember, was scathing: “She’s not helping Ted and doing it quite deliberately unfortunately … for her to be coming out now saying we shouldn’t be doing it is just hypocritical. I don’t mind the Greens … they’ve got every right to put their hand up and they’ve got every right to be supported if people are silly enough to support them.

“Our opponents are the Labor Party, not the Greens, we have had a policy for many many years … where the Liberal Party in Victoria and in Canberra put the Greens ahead of Labor … I wouldn’t change it, I would leave it exactly as it is.”

It remains debatable whether Kroger’s strategy would lead to Liberal gains. Although a more left-wing parliament could result if the Greens gained ground on Coalition preferences in the inner north, a decision to run an open ticket in marginals such as Mitcham, Mordialloc, Bentleigh, Burwood and Prahran could actually help the Coalition claw back some of the 13 seats needed for Ted Baillieu to secure an outright majority.

*Over the past week Crikey has profiled the pertinent issues exercising Victorian voters’ minds on the eve of the state election campaign — read previous surveys on crime and open and honest government , the economy, climate change and health

Murdoch, Baillieu and Morgan: a story of old Melbourne families