The New South Wales state Labor Government is now being ranked by the pollsters as the most unpopular in polling history.

Good news at last for federal Labor. The New South Wales state Labor Government is now being ranked  by the pollsters as the most unpopular in polling history and Julia Gillard should be delighted.

An absolute thumping in March next year for Kristina Keneally and her team is just what the Prime Minister needs. A couple of years with the Liberals in Macquarie Street will get rid of the anger at an incompetent state administration which clearly hurt Ms Gillard at the last federal poll.

The next best thing after the defeat in NSW would be for state Labor in Queensland to be beaten as well.

Does Tony even want state governments? Perhaps it is because Tony Abbott realises that state Liberal governments will be no help to his ambitions that he keeps making policy suggestions that just about makes states redundant.

Last night in outlining some policy plans for the future he joined schools to hospitals as areas where state bureaucrats should be bypassed. Public schools, like public hospitals, he argued should become community controlled.

”There is no cure-all for the problems of public schools and public hospitals, which will always have to juggle limited funds against virtually unlimited potential demand for services, but making decision-makers accountable to local boards would help,” he said.

Getting serious for Joe now. His Master’s voice has spoken. Shadow Treasurer Joe Hockey, despite his build, is a light weight. The Australian has told us so. This morning’s editorial from the Liberal Party’s number one supporter delivered an almighty serve. 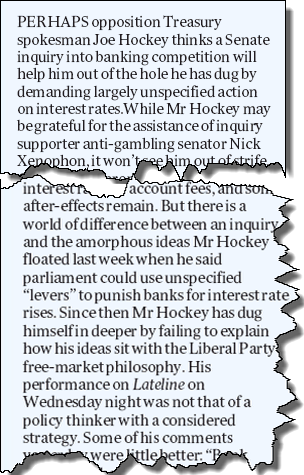 My word it’s fun to watch a politician destroy himself!

Don’t mention the war. It was a notable feature of our last election that the wars of Iraq and Afghanistan hardly got a mention. Pretty much the same in the UK too despite the official enquiry which saw former Prime Minister Tony Blair publicly examined. In neither country did either side of politics try and make soldiers being killed for little or no purpose into an issue.

Now I note that the same thing is happening in the United States. As the New York Times reports this morning, the wars in Afghanistan and Iraq have dominated American foreign policy for the past nine years, but debate about them is all but absent from this year’s midterm election campaigns.

“From Wilmington to Cleveland to Seattle, as Republicans try to wrest control of Congress from Democrats, the subjects barely come up. Ditto for President Obama’s stump speech as he zigzags around the country.

He often alludes to Iraq, albeit briefly. “Because of you, there are 100,000 young men and women who are returning home from Iraq — because of you,” Mr. Obama said Monday in Providence, R.I. But he does not mention Afghanistan on the campaign trail — nor, for the most part, do his Republican opponents.”

I can’t explain the relative silence. Can you?

Perhaps this is a little joke.

i expect there is no debate because most people have made up their mind. iraq was a wrong. afghanistan is hopeless.

what might’ help is if the meeja actually reported the existence of 40M people in pashtunistan who don’t recognise any such ‘afghanistan’ western border. that ‘little’ fact sort of makes a mess of everything we hear about provinces, and central govt and all that western ignorance.