And now a word from our sponsor… Mia Freedman is heading out on the town. As she tells her loyal blog readers this week:

“So before this dinner party I am going to call my friends and ask them to meet me for a Smirnoff Cocktail or two while we exchange beauty products and ideas, discuss the dresses and get our nails buffed and our legs tanned.”

That seems rather specific — does it have to be a Smirnoff? Well yes, when they’re paying. In fact, Freedman didn’t write the article — it’s a “sponsored post” among the usual mix of fashion, celebrity gossip and insights from the former magazine queen. 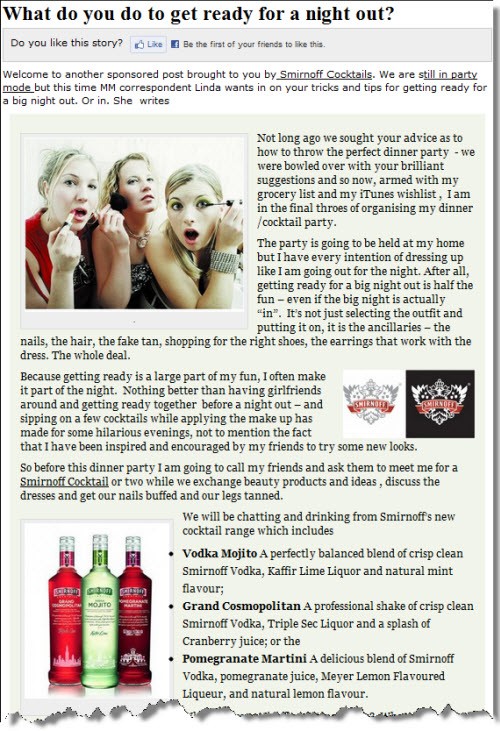 Freedman has been running cash for comment for some time, as Crikey discovered today. At least the sponsorship was clear for Smirnoff — you often have to look a bit harder to find the disclosure in earlier paid articles from fashion line Metalicus, Spatone energy supplements, hair dye L’Oreal INOA, a cancer charity concert, Swedish superstore Ikea, tour company Intrepid Travel, Coles supermarkets and stationary store OfficeMax. We wonder if readers always know the difference…? — Jason Whittaker

Scott extends stay at Aunty. Mark Scott isn’t going anywhere — he’s signed a contract extension as ABC managing director for a further five years, the broadcaster announced today. The new term, starting in July, will see the former Fairfax executive at the helm of the ABC until at least 2016.

“Mark has made a significant contribution to the Corporation’s success in the nearly four and a half years he has been here, having presided over the launch of two television channels; the ABC3 children’s channel and ABC News 24, and the rollout of digital radio. He has also taken a number of decisions which have added greatly to the ABC’s efficiency.”

Scott says there is “much more to be done” — which won’t please his many critics, who have attacked him for driving the establishment of a rival to 24-hour news network Sky News while extending Aunty’s tentacles further into the online space. — Jason Whittaker

“James Packer looks to have secured his first scalp at Ten Network Holdings [with] the broadcaster’s executive chairman, Nick Falloon, agreeing to stand down as part of broader changes at the media group.” — The Australian

“If anything comes of President Barack Obama’s historic visit to Comedy Central’s Daily Show, I hope it is this: People will stop griping about how such appearances cheapen the Presidency.” — Huffington Post

“My opinion about iPad-based magazines is that they run counter to how people use tablets today and, unless something changes, will remain at odds with the way people will use tablets as the medium matures. They’re bloated, user-unfriendly, and map to a tired pattern of mass-media brands trying vainly to establish beachheads on new platforms without really understanding the platforms at all.” — Subtraction

The real book from the fake Mad Man

“Just so it is clear in everyone’s minds: the 1960s were real. John Slattery is real. Roger Sterling, the character he plays on Mad Men, is not real, and the subplot from the past season of that AMC period drama in which he seeks to publish a memoir of his business advice was fiction. Having said all that, the book in question is real.” — New York Times

[Scott extends stay at Aunty. Mark Scott isn’t going anywhere — he’s signed a contract extension as ABC managing director for a further five years, the broadcaster announced today. The new term, starting in July, will see the former Fairfax executive at the helm of the ABC until at least 2016.]

I cannot believe my eyes. The lunatics are indeed running the asylum