When will Australia’s coal run out?

A lot is being invested in infrastructure for coal production and transport to keep this growth going. But how long will this bonanza last, asks Stubborn Mule.

Coal exports are a growth industry for Australia. A lot is being invested in infrastructure for coal production and transport to keep this growth going. But how long will this bonanza last? After all, there is only a finite amount of the stuff in the ground.

Earlier this year, the Australian Bureau of Agricultural and Resource Economics (ABARE) released an extensive report on Australia’s energy resources. The chapter on coal included the following observation:

At the 2008 rate of production of around 490 Mt [mega-tonnes] per year the EDR are adequate to support about 90 years of production.

For those unfamiliar with the jargon of the industry,  “EDR” stands for “Economic Demonstrated Resources”, which means an estimate of the total amount of coal in the ground that we could feasibly dig up.

Now some of you may already be thinking that 90 years does not sound all that long, but there’s a problem. The authors of the report do not understand exponential growth! The catch is hidden in the apparently innocuous phrase “at the 2008 rate of production”. In other words, to come up with the 90-year figure they are assuming that production levels do not grow at all for the next 90 years. Is that reasonable?

A quick look at coal production over almost 50 years would indicate that it is far from a reasonable assumption.

Even to the untrained eye, a growth trend is evident in this chart, a fact that is confirmed by looking at year-on-year growth, which has averaged about 5% and has only been negative three times over the whole period.

So, where does the 90-year figure come from? According to the ABARE report, Economic Demonstrated Resources are 39.2 giga-tonnes (Gt). Add to this another 8.3 Gt of “Sub-economic Demonstrated Resources”, or SDR, (i.e. reserves that are really hard to get) gives an estimate total of 47.5 Gt for Australia’s coal reserves. Now 90 × 490 Mt (the 2008 production rate) gives 44.1 Gt, which is somewhere between EDR and the combined total of EDR and SDR. Presumably the ABARE authors are allowing for the possibility that over time it will become economically feasible to mine some of the coal that is currently classified as sub-economic.

But there is no way that 2008 production rates will be kept steady for the next 90 years. Apart from anything else, there are plenty of stakeholders in the coal industry doing their best right now to see their export business grow.

To come up with a better estimate of how long the coal might last, rather than assuming zero production growth, I will assume a constant growth rate. While the annual growth rate from 1961 to 2008 averaged 5% per annum, growth has been a little slower more recently. The past five years have seen growth average only 3.1% (presumably the global financial crisis did not help). Working with the ABARE estimate that viable coal reserves are 90 times 2008 production levels and assuming 3.1% annual growth in production, the reserves will in fact only last for 43 years! That is less than half the 90-year figure in the ABARE report and it starts to seem like an awfully short period of time. Since the working life of coal-fired power stations is typically about 40 years, this means any new power stations built today would still work out their useful life, but they could be the last ones we build and extract the full value of their potential productivity.

Of course, if the growth rate is higher, the time to deplete the reserves will be lower, as is illustrated in the table below. In fact, if production growth returns a long run average of 5%, then reserves would only last 34 years. 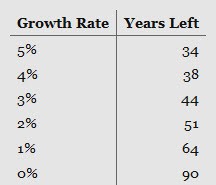 Optimists may counter that the ABARE estimates of the available reserves might be far too conservative. Perhaps there are coalfields out there just waiting to be discovered. Surely that would give us room to have coal export growth go gangbusters, wouldn’t it? Let’s see. I’ll be generous and assume that coal reserves are in fact twice as big. Running the figures again assuming reserves total 180 times 2008 production levels still means that with 3.1% annual production growth, the coal will all be gone in 60 years and if growth is 5%, it will only last 46 years. Now it may be the case that climate change will trigger disasters on such as scale that in 40 years time we are not too worried about coal production, nevertheless, these basic calculations mean that some or all of the following must be true.

If we are going to stretch coal supplies beyond 40 years, what can slow down the need for production? With a price on carbon not looking likely to slow Australian energy consumption in the near future, one possibility would be to reduce the share of coal production that is exported and keep more of it for our own energy needs. After all, the export share has been growing quite rapidly.

With about 66% going offshore, there is quite a bit that could be clawed back there. But who would dare suggest slowing export growth? Maybe we will just wake up one morning and discover, with a shock, that the coal is all gone and, since it is estimated that Australia has about 6% of the world’s coal reserves, the rest of the world may face the same realisation even sooner.

*Data source: ABARE (note that the 2007-08 production figures in this data set look a little lower than the 490 Mt figure quoted in the report).
**This first appeared on Stubborn Mule.

Are renewables really cheaper than coal and nuclear?

Stubborn Mule is not alone in these thoughts. Yes we have the debatable (mainly around when) ‘Peak oil’ but a few reckon peak coal ‘aint far behind. See Mohr, S. H. &Evans, G. M. (2009). Forecasting coal production until 2100. Fuel 88(11): 2059-2067. Their abstract “A model capable of projecting mineral resources production has been developed. The model includes supply and demand interactions, and has been applied to all coal producing countries. A model of worldwide coal production has been developed for three scenarios. The ultimately recoverable resources (URR) estimates used in the scenarios ranged from 700 Gt to 1243 Gt. The model indicates that worldwide coal production will peak between 2010 and 2048 on a mass basis and between 2011 and 2047 on an energy basis. The Best Guess scenario, assumed a URR of 1144 Gt and peaks in 2034 on a mass basis, and in 2026 on an energy basis.”

Peak Oil has been forecast since at least the 1920’s. Peak coal since at least the 1890’s.
Both scenarios will ocurr. It is just not known when. Mainly because new discoveries are made or substitues found for at least niche uses.
The fact that the forecasts get a run in the media every few years shows that old stories are easier to write than valid stories.

I made this point in a post ages ago, albeit without the Australia wide figures.

The Hunter Valley alone is expected to run out in 25 years.

And there in lies a tale. What will run out first will be those long exploited coal fields, nearest cities and ports. Thereafter it will be the further away ones that are exploited. These will be more more expensive to ship to our power stations and ports even if extraction costs are the same.

Add in peak oil* price impacts and realistically economically exploitable amount of coal will run out in a lot less than 40 years. By then coal prices will have risen to levels where electricity generation by literally anything else will be cheaper.

* Australia is now down to about 50% self sufficiency in oil, with all gone in about 10 years or so. So we will become totally reliant on imports. With most oil on the world market disappearing in 20 or so years (reserve depletion, production dropping, rising internal consumption in oil producing countries and the locking up of large amounts in long term contracts) then life is going to get very interesting pretty soon.

Unfortunately, your figures are out of date.

At 2009 rate of production (445 Mt), that’s an extra 10 years of economic resources discovered in one year.

Peak coal is a long way off.

“Economic Demonstrated Resources”, which means an estimate of the total amount of coal in the ground that we could feasibly dig up.

No it doesn’t. It means coal that has been intersected by a sufficiently large number of drillholes as to be pretty sure how many railway wagons you’ll need to take the stuff away when the excavators get to it. Most of this sort of resource exploration is only a few years ahead of the digger, which is why EDR has almost nothing to do with ‘the total amount of coal in the ground that we could feasibly dig up’. Even the “generous” twice-as-much assumption is nothing of the sort, and will be well wide of the mark.

With the exception of peak oil (for reasons I explain here), @taust is on the money. Stubborn Mule has just joined a long list of people from Paul Ehrlich on down who have made fools of themselves by fundamentally misunderstanding how this sort of thing works.

We definitely don’t want to be betting the climate on coal scarcity.